A wise person once told me that ad spend flows to the least resistant path.

That explains a lot about how the triopoly has been able to maintain its stronghold of the majority of ad spend (roughly 85%), even though it’s getting much harder to target the people who actually want to buy stuff. Together, they know a heck of a lot about all of the people that advertisers want to reach and their walled gardens have been the most effective way of reaching those people for cheap. Especially Amazon, which owns the customer experience all the way from product discovery to checkout.

But we’ve seen Facebook and Google’s latest revenues dampened by privacy restrictions. And we can expect them to prioritize their own ad businesses over making any major investments in the future of the open internet (which means publisher survival).

So what does that mean for the rest of the open web?

If open internet media companies want to continue to grow, they’re going to have to reduce their dependence on the triopoly and they’ll also need to diversify their revenue.

“Big publishers have some very structural advantages in their ability to hedge against some of these risks for Google, Amazon, and Meta — but just more generally to build a durable source of revenue,” says Chris Kane, Founder and President, Jounce. “And, I think what that sets up is that the open internet supply is going to get more and more concentrated with a relatively small number of publishers.”

Considering about 1 million properties get transacted programmatically, it might be easy to think of the open internet as this very fragmented supply.  But really only a small number of media companies control the vast sea of properties that comprise the open internet. In fact, the 10 largest web publishers capture half of all web spend.

Check out the following chart, from Jounce’s 2022 Market Outlook, which plots the distribution of programmatic web, mobile app, and CTV spend by publisher: 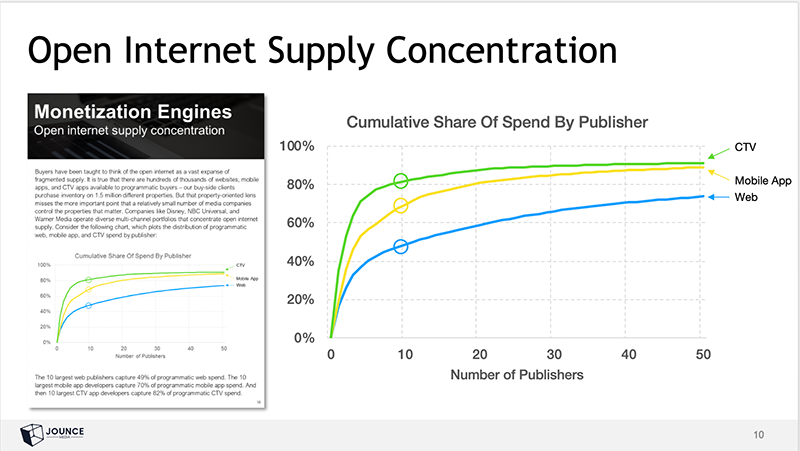 Companies like Disney, NBC Universal, and Warner Media operate diverse multi-channel portfolios that concentrate open internet supply. Scaled media companies like these have technical sophistication, sales presence, negotiating leverage, and data richness at their disposal helping them to catch more programmatic dollars than their media peers. And with all of the recent M&A activity we’ve seen happening in the industry, the supply is only going to become more concentrated.

To learn more about Open Internet Supply Concentration, as well as Walled Garden Coopetition and Supply Chain Compression, head over to Jounce and download: The State Of The Open Internet: A Data-driven Perspective On The Forces That Will Shape The Ad-supported Open Internet In 2022.