Digitial out of home and digital signage has seen tremendous growth the past couple of years.

DOOH programmatic ad spend is set to double year over year, totaling $181.6 million, with that figure reaching $533.8 million by 2022, according to marketer.

Certainly, as lockdowns were in order globally, DOOH experienced a pandemic decline like nearly every other form of media. As consumer behavior changed, so did DOOH to that of information source with public safety messages for the essential workers and others who were out of doors.

Now as things begin to reopen, DOOH is faced with the opportunity to reinvent itself once again.

On the eve of DPAA’s 2020 Video Everywhere Summit, I spoke with the organization’s president and CEO, Barry Frey, about the role DOOH played during the early days of the pandemic and how advancements in data and technology are  positioning the industry to reap its just rewards.

Lynne d Johnson: DPAA Video Everywhere Summit is coming up October 13-15. What are some of the big topics being talked about in DOOH right now? How will things differ from last year’s event, given all we’ve been through in 2020? 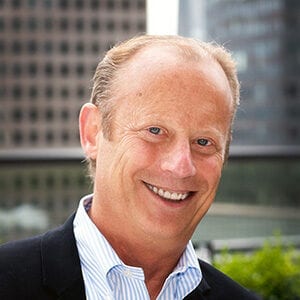 Barry Frey: This year’s Summit will be a live-streamed production over parts of three days, from October 13-15, 11 am-2:30 pm ET each day. There is still time to register here. So many people have told us that DPAA has set the standard for livestream events in the work-from-home environment. We take great pride in this and pledge to make our livestream global Video Everywhere Summit our best event yet, as evidenced by the blockbuster lineup of influential speakers who will address delegates over the course of a very digestible, three-day format. We expect a record turnout since the online nature of this year’s Summit will enable many first-timers to attend, including a significant number from overseas.

BH: DOOH political ad spend has increased dramatically because of the medium’s ability to reach consumers with relevant messages that, thanks to programmatic, can be changed quickly depending on what is resonating with the public at any given moment. So, for example, political campaigns can change their messaging based on what just transpired at a debate, or what headlines are dominating the news and so on.

We all know how quickly the narrative can change in politics, and DOOH screens offer the flexibility to convey messaging in real-time to geo-targeted audiences.

LdJ: DOOH has been growing by leaps and bounds the past few years, but COVID-19 has been a hindrance to that growth. In the early days of the pandemic, the loss of foot traffic and advertising dollars really hit DOOH hard. Where do things stand now?

BF: Prior to states reopening, there was still traffic and eyeballs at grocery stores, pharma, residential building screens, gas stations, point of care, and then all of the routes, whether walking, public transport or cars on the way to these areas.

Today, with many regions re-opening to various extents, we are seeing a return of foot traffic to near pre-Covid levels. We fully expect to jump back into the growth curve that we were experiencing pre-Covid and anticipate that our trajectory will continue to be steadily upward.

Our fundamentals were incredibly strong going in, and those same fundamentals are still there. We’ve had a lot of momentum for the past three years and tremendous growth. We’ve been the only medium that has not been negatively disturbed by digital, but quite frankly, the opposite. We’ve been enhanced by digital.

LdJ: As everything has started opening back up again and people are traveling outside of their immediate areas again, I imagine DOOH is playing a pivotal role in helping businesses get back on their feet—especially small and local businesses. How can the DOOH industry stay afloat and how will things look post-pandemic?

BF: As states and regions and countries are opening up, our screens can be a guiding light for messaging in communities: “Stay six feet away, stay five feet away, wash your hands.” As this has not been all of a sudden opening up the floodgates, our screens can help society come back in providing that guidance.

In addition to that, as we’re coming back, we’re very excited about the fact that DOOH and DOOH programmatic can enable advertisers to easily shift schedules to automate more easily to target audiences—and move in a more effective digital way than heretofore in out of home advertising—where schedules can really get up and running pretty quickly.

Think about TV commercials and a lot of all the production virtually shut down. For us to get messaging up on screens and advertising on our screens can be done very efficiently, effectively, and speedily as well.

LdJ: DOOH has also been a true lifeline, providing people with key information. The Out-of-Home Advertising Association of America partnered with the CDC to provide safety info on digital billboards. Your organization teamed up with the Madwell agency on “We Are the Countervirus.”  Can you tell us about that?

BF: We saw consumer habits change because of all the important messaging and it also helped enhance awareness of our digital screens. Our members have done some great work thanking the essential workers and, urging the maintenance of social distancing—wearing masks and so on. It’s been important for society to have the messaging out there and a lot of conversations have ensued from that.

Madwell is a very hot Brooklyn agency and we created WeAreTheCountervirus.com with them referring to the fact that we humans, can flatten the curve by our actions or our lack of actions. The campaign aired on many of our media owners around the world. We aired the campaign in the U.K., of course, in the US and Africa and Japan and India, Canada, and other countries.

It was very effective—in one sense, thanking all the essential workers that are out need to be out, whether it’s doctors, emergency workers, as well as the delivery folks that are keeping the world going. And keep in mind that those people are very much out there seeing the advertising on the screens. And at the same time, it gave messages to people who were out that they needed to separate or needed to go back home—if you’re seeing this, get back home.

Coming off the success of that campaign, we have launched another one in support of DOOH advertising. The campaign was developed by DPAA in conjunction with Madwell and legendary advertising creative executive Jon Bond, with sponsorship support from Ubimo, the location intelligence technology company that works with out-of-home agencies and media owners to plan, target, measure and optimize campaigns.

The campaign is called “With DOOH, You Can,” and it conveys to advertising decision-makers that DOOH audiences are steadily coming back and that programmatic DOOH is agile and nimble, and thus ideal for the greater-than-ever need to change messages in real-time.

The video campaign is running on several of our member networks whose screens reach advertising decision-makers, including office building elevator and lobby screens via Captivate Media, as well as in advertising and media trade publications reaching a global audience. GroundTruth has donated one million mobile ad impressions to the campaign.

BF: Approximately 70-90% of mobile video and display advertising is programmatically traded now. So clearly, that’s the way the demand side would like to see more advertising getting done because of the automation, the targeting, simplicity, speed, effectiveness, and efficiency.

At DPAA, we started about five or six years ago with the first DOOH programmatic panel at Video Everywhere Summit and we’ve been empowering DOOH programmatic ever since as we develop the standards for tech, for creative, and as we modeled the multiplier system to exhibit and grow programmatic advertising.

It enables advertisers to get their messaging in a more automated system to target audiences and show attribution. We’ve got tremendous members like Hivestack, VIOOH, Broadsign and Vistar Media that are helping to really lead the area. Plus all of the SSPs and DSPs in the regular digital world are also members helping to move this business along.

LdJ: With the deprecation of the third-party cookie imminent, what are your thoughts on the opportunity this presents for DOOH, especially given the superior location-based targeting capabilities and ability to be contextually relevant in real-time with DOOH?

BF: The contextual relevance, the targetability and the attribution with DOOH programmatic is very powerful, even as cookies may disappear from other media.

LdJ: What are some of the ways we can expect 5G to up DOOH’s game? Will our environment look like a scene out of Blade Runner?

BF: Certainly, the absence of latency will support DOOH, plus marketers and consumers and communities—all the way around. It’s basically faster, better, quicker, and able to connect to screens with messaging in real-time.

As we are part of Smart Cities in understanding knowledge and movements around cities and making cities more effective—5G enables this all to happen. There’ll also be some innovation and flexibility in hardware design and use because of 5G.