Google released the timeline for the Privacy Sandbox and is finally bidding adieu to third-party cookies in 2023— maybe it’s for real this time.

This estimated timeline is based on origin trials, Privacy Sandbox use cases, readiness at scale, and ending support for third-party cookies. Chrome will continue to update the timeline on a monthly basis. 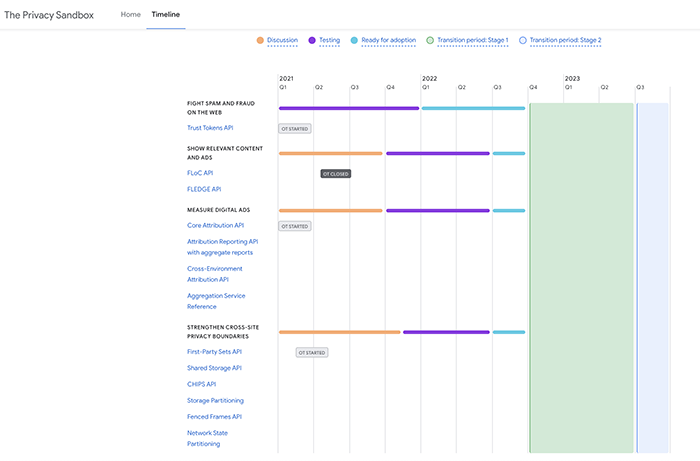 But don’t get cozy. 2023 is both far away and extremely close. In addition, the Competition and Markets Authority (CMA) in the UK has voiced its concerns regarding the Privacy Sandbox and Chrome’s deprecation of third-party cookies.

So much so that “CMA reached an agreement with Google that gives it oversight of the Privacy Sandbox and forces Google to make certain commitments with respect to the deprecation of third-party cookies in Chrome. The CMA has invited comments from the marketplace on Google’s Privacy Sandbox and the commitments Google has made to address competition concerns.”

As such, the CMA will play a role in future W3C proceedings.

Will Google address W3C Improving Web Advertising Business Group concerns? In the past Chrome hasn’t played nice with everyone else, specifically at W3C meetings where solutions were being discussed. Could this lead to a more fair and balanced agenda going forward?

This agreement between Google and the CMA is painted with a broad stroke. Will certain implementations be applied worldwide or only in certain jurisdictions?

The CMA hasn’t been the only entity with concerns over the true privacy of Google’s Privacy Sandbox. During the recent origin trials, Edge, Safari, Firefox, and Brave all blocked FLoC‘s tracking abilities on their browsers. Mozilla and Firefox aren’t buying that non-consented user data is the best path forward for a privacy-safe advertising future. Who’s to say that these guys won’t join the Alpha browser at a later date, but as of now, Chrome is flying solo. Lonely bird.

Amazon and WordPress have also said they will not implement the FLoC proposal. And while Twitter appeared to be on board with FLoC a few weeks ago, it appears that after user backlash the code for the third-party cookie alternative has been removed from Twitter’s platform.

Along with all of these privacy concerns over how Google’s Privacy Sandbox functions, there’s been much contention about the leading role that Google (excuse us, Chrome) will play in deciding the future of digital advertising.

There are a host of ad tech companies banking on their ID alternatives serving as cookie alternatives in the advertising ecosystem. But as Garrett Sloane recently pointed out in AdAge, “In many cases, the effectiveness of alternative IDs, the cookie replacements that are being developed, depend on tactics like “fingerprinting” and “cross-site” tracking that Google is looking to shut down.” Google has no plans to support IDs built on using consumer’s PII, like emails for instance. For this reason, ID solution vendors have valid fears that publishers won’t even give their alternatives a chance.

“The new timeline, and emergence of a formal evaluation process to compare the competing alternatives, looks like a semblance of how change should happen. It makes you wonder if Google was really serious about switching to FLoC or looking for a PR win and trying to damage competitors in the process,” says Patrick O’Leary, CEO at Boostr.

What they ID vendors are selling sounds great for pubs — an opportunity to take back control and level the playing field. But at the end of the day, publishers are only going to put their resources where they know the buyers will play.

Amy Corr is a writer and editor, who has covered advertising, media, and creative for publications such as Adweek, Dealer News Today, and Medical, Marketing & Media. Corr currently writes thought leadership pieces for advertising agencies on a variety of topics like using first party data for marketing initiatives; Gen Z spending habits; the future of retail marketing; a post-COVID workplace, and the Bridgerton effect on TikTok. Prior to that, she spent 17 years at MediaPost as managing editor, online newsletters, where she also penned the weekly creative column, “Out to Launch.”