This is the first article in the Native Chronicles series, brought to you with the support of TripleLift. Read the second article on flexibility and A/B testing and the third on the future of mobile.

The first banner ad is both a thing of legend and of infamy. The latter because it launched a revolution of skyscrapers, page takeovers, interstitials, animated Flash units and other interruptive contrivances that users have learned to loathe. But the first banner ad—a spot for AT&T on Wired.com in 1994—is remembered fondly in the advertising industry most for its click-through rate: 44%.

Did your eyes get a little wide when you read that? In an age where a .01% CTR is cause for celebration (maybe not champagne, but the champagne of beers? Oh yeah.), 44% feels like paradise lost. Of course, the number must be taken with many caveats, number one being that the first banner was new and novel. Users actually wondered—to borrow from “The Rainbow Connection”—what’s on the other side?

Unfortunately, landing pages aren’t quite as stimulating as they used to be. Also, that first banner on top was the only display ad on that page. Soon enough, users were lucky if they only ran into 10-15 of the little bastards causing page latency and blocking content.

Yes, publishers abused the banner when it was a revenue gift, and quickly it turned to a curse. Display ad over-saturation resulted in a cruel affliction (well, cruel to advertisers) known as banner blindness. Users will now scroll through a 30-item listicle and not recall a single brand that laid down cash to show off their wares.

WITH THE SUPPORT OF TripleLift
The Evolution of Display

We’ve learned to phase out banners from our field of vision. One of the most interesting findings in viewability studies was that, despite theoretically being highly viewable on page load, banners at the top of a page tended to report low viewability. By instinct, users scroll right past them to the desired content, sometimes before the ads even finish loading.

Arguably, the viewability crusade has actually done good, as most premium publishers have cut down on display units to improve user experience. Yet banners are still ignored, scrolled past, or blocked by ad haters. Efforts to force users to pay attention like interstitials are increasingly frowned upon, with browsers even threatening to shut them down.

Consider that so much focus in digital advertising has been on the piping—the technology required to improve transactions and executions. Now an advertiser can easily leverage first-party (or maybe second- or third-party) to target a user on an exchange in real time. But creative has lagged far behind—to the point users don’t even notice it.

In one of my favorite anecdotes from an AdMonsters conference, a publisher mentioned that an advertiser was cancelling his recurrent display buy with the pub after five years because he was seeing diminishing engagement and response. The ops person replied, “Have you considered that might have something to do with fact that you’ve been using the exact same creative for the past five years?”

Building display creative is often an afterthought for most advertisers, and considering the poor CTR (incredibly, still a highly regarded metric) mentioned above, it’s not surprising that banners are the unloved stepchild of advertising.

In branding, the display element is likely tied to a TV or video campaign, while in direct-response or retargeting, the display creative may reflect specific products and/or services. There hasn’t been real buy-side innovation in display creative since the days when Flash was king of the valley. (For some advertisers, sadly, those days haven’t ended.)

Major publishers have noticed these limp creative efforts and seized the opportunity by opening their own creative shops that emphasize formats that are integrated with content. This is of course following the model of Facebook, Pinterest, Snapchat and other social platforms. These innovative companies built their interfaces with their consumer and format at the forefront of their businesses, and then created ad products that worked for them instead of the other way around.

But those platforms and the publishers with creative studios are giants; they can invest in designers and developers to build exciting creative and formats at something approaching scale. Smaller publishers with a handful of revenue people (at most!) and even mid-size publishers barely have the resources to keep up site monetization, let alone build creative teams.

The Native Focus on Creative

Which is why native placements are such an interesting proposition. Publishers (and, believe it or not, advertisers) can innovate on the creative front without a mega infrastructure. Native component-based advertising allows for an increased amount of flexibility for publishers to design advertising formats to best serve a publisher’s audience and content goals.

And not that the use of native should be limited to size-constrained advertisers and publishers—adoption of native formats across the spectrum could make for a far more aesthetically appealing Internet, while potentially improving display campaign engagement. While recapturing a 44% CTR seems the epitome of a pipe dream, native can revive the first banner’s freshness and groundbreaking nature.

How many times have rolled your eyes at a headline proclaiming, “The Banner Is Dead!?” No, display advertising isn’t dead, and it isn’t dying, no matter how many publishers go chasing the video pre-roll gold rush. Display advertising is evolving, and native is a key element in its growth. 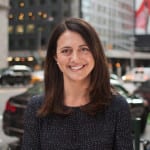 Jorden Hirsch is the Director of Publisher Client Services at TripleLift, where she is responsible for growing and developing all publisher relationships. In this role, Jorden helps define publisher strategy, and along with her team is responsible for driving client success and satisfaction. Prior to joining TripleLift, Jorden was Programmatic Strategist at Weather Channel and the leader of the Publisher Account Management team at PubMatic. Jorden holds a bachelor degree from University of California, Santa Barbara and while she occasionally misses the west coast, she’s happy to call New York City home today.

No Third-party Cookies, No Problem: Ranker on First-party Data in a Privacy-safe World