With the growing tragedy that is the pandemic, numerous businesses, including advertising, experienced great challenges.

The emergence of AI, the excitement around 5G, expectations put on Out-Of-Home, and other trends we all thought would become the cornerstones of 2020 were dramatically swept aside by COVID-19.

Let’s take a closer look at how consumer digital content consumption changed, as well as how advertisers’ strategies adjusted along with the ad investments they make in hopes of getting closer to their audiences.

Blame It on the Pandemic

Publishers really experienced the wrath of the pandemic in action. Yet, there are still a lot of monetization opportunities, especially in terms of video and CTV/OTT ad monetization.

But print media—that’s a totally different story, of course. Remember when newspapers and magazines had retailers spending loads of money on ads? With the pandemic, print experienced a substantial outflow of advertising budgets—and readership—hitting publishers hard. In some markets, though, print newspapers still possess sizable audiences.

For instance, in Germany, as of Q1 2020, 64.6% of internet users read a print newspaper in a month. Print media also remains widely accepted in Portugal, despite a continuous readership drop. In Q1, print newspaper and magazine penetration reached about 60% there.

However, on a global scale, print newspapers and magazines saw the most dramatic decreases this year. Specifically, significant drops were seen in Colombia, Hong Kong, Romania, and other markets.

The pandemic caused significant ad budget reallocation, but digital advertising is still essential for most brands. Besides, as desktop and laptop devices maintain popularity among internet users, advertisers were not too hasty to abandon this ad channel.

Of course, some digital advertising categories got affected by ad dollar shifts and holds, yet several types of ads were still on the plus side in 2020. 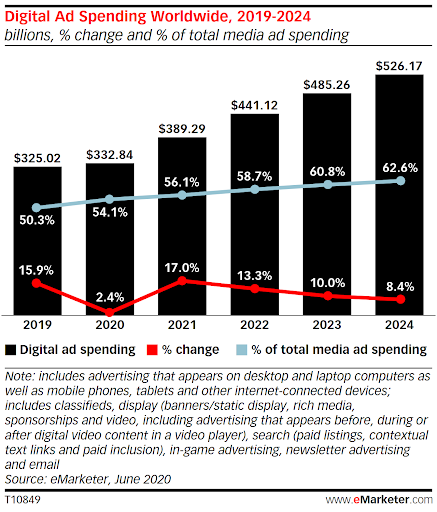 According to eMarketer’s forecast, global ad investments will reach almost $333 B, making up 54% of total media ad spend. When it comes to 2021’s ad spending plans, about 70% of buyers still have their budgets in a state of flux, though those buyers predict at least a 5% uptick for 2021 compared with this year.

Not surprisingly, smartphones continue to force PCs and tablets to move over as they claim the role of primary gadgets owned by internet users globally. This is especially true in developing markets, including Brazil, China, Egypt, and India, which have all seen a decline in desktop, laptop, and tablet ownership. 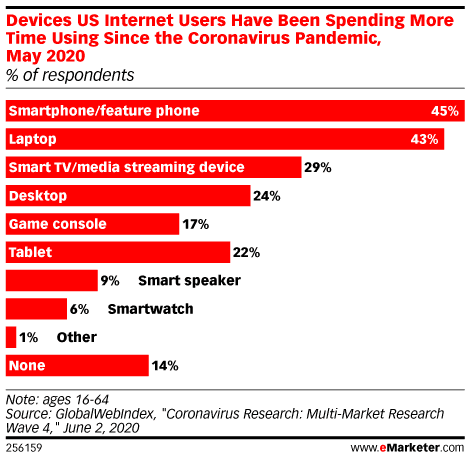 From another perspective, older audiences are still maintaining PC and tablet penetration at a higher level. And, there are other types of internet users who spend more time with PCs since the pandemic began, like gamers and people who are working from home. Thus, the US internet audience has been dedicating more time to their laptops (43%) and desktops (24%).

Still, most devices can’t compete with smartphone penetration these days.

Everybody Wants Their CTV

But there are other devices that are gaining traction. Larger-screen connected TV devices, including CTVs, game consoles, smart TVs, and other connected devices are all increasing in usage. As the trend of CTV penetration grows by leaps and bounds, it is predicted that CTV usage in the US will surpass 200 million by the end of 2020.

Apparently, the pandemic has raised overall media consumption, and several channels, in particular. Hence, connected TV has been one of the pandemic’s biggest beneficiaries since people are streaming more than ever while being stuck at home.

Recent eMarketer findings from all over the globe back this up: more than 86% of internet users in Brazil, over 90% in Mexico, and almost the same number in New Zealand and the US had watched SVOD content and live TV since the pandemic began.

But that’s not all that’s trending in the world of CTV/OTT and video advertising?

Subscription Viewing on the Rise

By the end of this year, in North America, Netflix alone is expected to have over 185 M users. In Western Europe, the number of subscription OTT video service users will increase by 15.6% with even more significant gains next year. eMarketer’s figures related to SVOD content viewing not only provide a picture of the current state of play within subscription video but also basically show the growing trend here.

Along with growing viewership, we’ll see increased dollars going to CTV/OTT. Besides, enhancements of addressable capabilities, as well as further progress to more accurate and multiplatform measurement and transparency, are upon us.

With such promising SVOD viewership prospects, brands need to prepare carefully before serving their ads in front of their audience. One of the essentials to think about is ad formats.

In-stream video ads still work great, thanks to being similar to traditional TV commercials. Served in a non-intrusive way and when relevant to the context and personalized viewer’s interests, in-stream video ads can work brilliantly to grab viewer’s attention.

Other eye-catching ad formats perfect for CTV/OTT are carousel static banners and overlay full-screen ads. What makes overlay ads so efficient is an opportunity to serve such large-scale ads on large smart TV screens that typically bring together whole families in living rooms.

One more essential component here is interactivity that, combined with full-screen interactive videos and overlays with a compelling call-to-action, can greatly convert viewers.

Particular attention should be given to immersive video advertising.

Thus, shoppable ads that have become available in CTV recently seem to bring retailers a new killer way to serve their ads in front of potential consumers and convert them right away. Think of Walmart and TikTok’s recent live shoppable event as an example.

Of course, this is where the mix of creative, ad messaging, and context should create a perfect match to win the audience’s hearts.

We’ll see more ads like these as penetration of AR and VR sets become as widely available in households as smart TVs and game consoles.

Thinking Cross-device Is a Must

With smartphones serving as primary devices, the trend of the second screen is increasing as well. Typically the audience is simultaneously using a mobile gadget to look for something, send messages, or shop, along with watching CTV.

This provides brands with an unprecedented opportunity to reach their potential consumers across multiple devices. This was especially crucial in the holiday shopping season, as the majority of the CTV audience is expected to shop online this year.

Industry flagmen, like Facebook as well as IAB experts, recommend keeping the ads between 10 and 15 seconds. With the flood of digital content and the diminishing attention span of audiences, short, creative, and to-the-point video ads will work both ways for viewers and marketers.

The changes the pandemic brought into digital content consumption has created both challenges and new opportunities for advertisers.

Yet, in this turbulent year, CTV and video advertising have revealed to marketers the direction that can help them grow up and forward.

Since it seems the stay-at-home trend will continue, at least into Q1 of 2021, people worldwide will keep working, learning, exercising, and doing most everything else at home. This is where savvy marketers can take a closer look at high-performing and rising advertising opportunities to include those into their overall media strategy well into the new year. 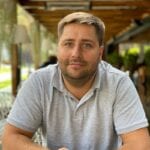