Now with the recent influx of premium streaming services like Disney+ and HBO Max, along with changing CouchSurfing consumer behaviors brought on by the Pandemic, it looks like OTT is really set to take off.

In fact, according to North America OTT TV & Video Forecasts report from analyst firm Digital TV Research, the OTT market is expected to double over the next five years—raking in over $94b. That’s a whole lotta cheddar and nearly double the $49b OTT rang up in 2020.

The US remains the most mature OTT market and the world, bringing in the lion’s share of that revenue, with projections for 2026 at $88b, up from $44b in 2020. India is steadily growing and significantly adding to the overall global OTT revenue explosion. 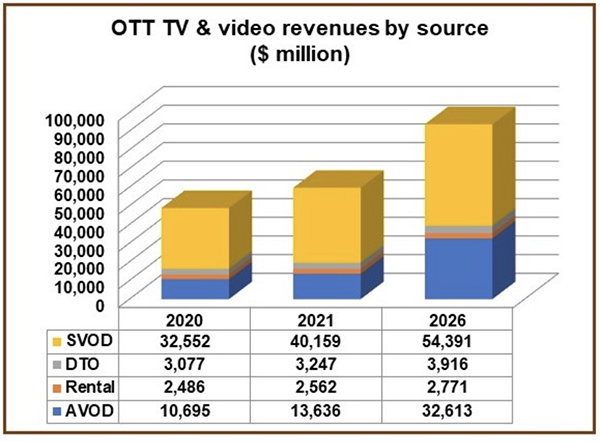 Why it matters: The winners of the OTT game will be the ones who can offer the best addressable audience solutions at scale for advertisers across devices and platforms.

This is where this recent deal between Roku and Nielsen’s video ad business makes even more sense while further blurring the lines between digital and linear TV advertising. In the deal, Roku gets to leverage Nielsen’s automatic content recognition (ACR) and dynamic ad insertion (DAI) to target household-level spots on OTT platforms and other devices, while Nielsen gets access to Roku’s more than 51.2 million audiences and more than 100 million smart TV and OTT devices to further the potential of digital ads running on linear networks. Still, addressable TV only accounts for a very small portion of the market.

Publishers will also benefit from the deal with the ability to implement Nielsen Digital Content Ratings (DCR) and digital ad ratings on Roku’s media sales and ad-buying platform, OneView.

And let’s not forget Magnite’s recent acquisition of SpotX to further expand into the CTV and OTT ad market.

Given the precipitous rise of OTT, it’s not at all surprising to hear Altice’s CEO predicting the death of cable TV. “As people move away from the cable bundle, by definition, everything is going to the OTT world over broadband,” he says, “So I think it’s a question of time. I can’t tell you when, where, and how, but it’s a question of time for cable operators, in general, to completely reevaluate whether or not they’re going to be in the video business.”