Ad blocking may have waned in recent years, but it’s still a major threat to publishers’ bottom line.

In fact, according to Informa Group, publishers stand to lose $35b by 2020 if the ad blocking conundrum isn’t solved.

When you couple the fact that people don’t like intrusive or slow-loading ads messing up their browsing experience, with the fact that more people are relocating their web surfing activities to their mobile devices—and you look at those factors under a microscope—you come up with some really interesting insights about the state of ad blocking in 2020.

The battle against ad blocking has gone full-on mobile.

Lest you fret—it’s not all doom and gloom.

While there are myriad ways to monetize ad blocked traffic, the best solution going is simply making and serving better ads. AdMonsters spoke with Marty Krátký-Katz, Co-Founder & CEO of ad-block monetization platform Blockthrough, about the findings from his company’s new 2020 PageFair Adblock Report and how publishers should best wage war against this monumental obstacle.

(Interview after the graphic.) 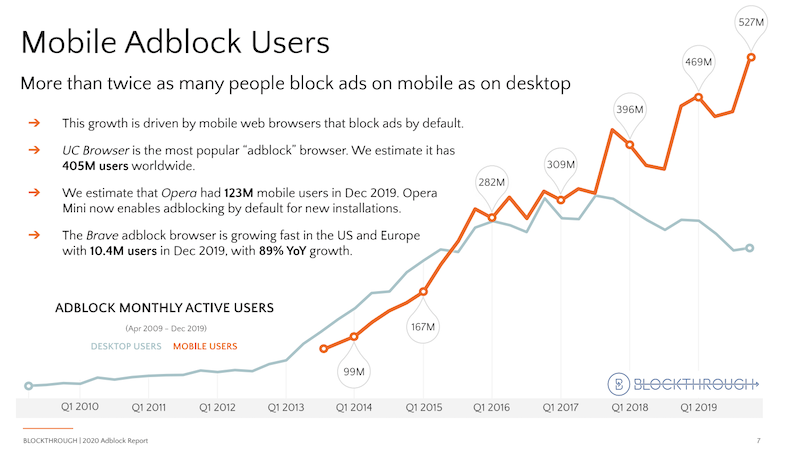 Lynne d Johnson: Ad blocking on desktop reached its height around 2016, 2017 and then sort of fell off a bit—or perhaps, simply leveled out.  So does your report confirm that as mobile eclipsed desktop usage, ad blocking has followed suit?

Marty Krátký-Katz: There are a few factors that go into the decline of ad blocking as measured in our report. One is that ad blocking has become more diverse. Classically desktop ad blockers were using extensions like Adblock or Adblock Plus on Chrome or some other browser. Our methodology can capture that easily. But now people are adopting different types of ad blockers—you can now block ads through a VPN and through hardware devices. That’s much harder to measure, so there’s a bit of dark matter if you will.

The second piece is that people are generally using their desktop computers less and less. They’re sort of becoming work or gaming devices and most people’s browsing happens on mobile now. So as people use desktop devices less, our methodology captures that as a decline in the number of devices using ad blocking.

LdJ: Hasn’t Google been doing some work in the battle against ad blocking?

MKK: Yes, Google has taken some steps to make ad blocking harder on both desktop and mobile. So they’re adding more friction to that process of users becoming ad blockers. And I think a really major factor in the decline in desktop is the Coalition for Better Ads, which Google is a part of, along with Microsoft and many other industry stakeholders. They have done some great work in terms of cleaning up the ad experience on the regular Web. This has been a great initiative, but for many ad-block users, it’s still not enough. And that’s why this problem still exists.

Google has said that if a publisher’s ad experience does not comply with better ads they will get penalized by the browser. My understanding is that Google will block most, if not all, the ads for any publisher who doesn’t comply. I think most people have complied because of that.

Editor’s note: Starting August 5, 2020, Chrome will start blocking intrusive video ads in short-form videos in line with the Coalition for Better Ads new standard for short-form video for desktop, mobile web and in-app. Yes, that means even if it’s YouTube.

LdJ: So how are publishers dealing with this?

MKK: Five years ago publishers were just trying whatever any vendor came up with if it sounded like it made sense on the surface. And what we’re seeing now in the industry is everyone starting to realize that the best method is really Acceptable Ads.

It takes into account that while some people want to block ads, a strong majority—80-90%—are actually ok with some light advertising. How do we get these people on something so publishers can make money and users are ok with it and have the ability to opt out. And for the users who don’t want to see any ads they have the option with Acceptable Ads to opt out completely.

We’re 100% focused on Acceptable Ads and being able to monetize Acceptable Ads as well as possible—maximizing monetization while keeping the user experience at a threshold that users are willing to accept. Users would rather you serve them a really light ad experience than an interruptive pop up that says: “Please turn off your ad blocker. Please support us.”

We’ve seen an independent ecosystem emerge where a strong majority of publishers (or the walled gardens) are no longer working directly with the ad-blockers, they’re working with a third party to monetize their ad-blocking audience.  It’s the best solution for the user and will result in the best revenue for the publisher and I think the data we’ve collected in this report validates that hypothesis.

Editor’s note: According to the Blockthrough report, 49% of the top 100 U.S. publishers are using Acceptable Ads to monetize their ad-blocking audience.

LdJ: How will the disappearing cookie impact ad-block recovery efforts?

MKK: A lot of users that are allowing Acceptable Ads are already blocking third-party cookies or any kind of behavioral tracking, so the cookie footprint for these users is actually lower on average than non-ad-blocking users,

We’re stipulating that this seismic shift would negatively impact monetization for regular traffic, but that would basically spread the ad spend across everything else. Our hypothesis and we’ve discussed this with Ari Paparo, who is an advisor of ours and the resident expert on the cookiepocalypse, monetization for our publisher partners should go up while everything else goes down and the spread sort of evening out across everybody. Or it should stay the same, but it shouldn’t be impacted negatively.

Here are some fascinating stats from the 2020 PageFair Adblock Report report: