Whether they’re watching YouTube videos or shopping online, most consumers prefer not to have ads interrupt their user experience.

In fact, a recent study conducted by Blockthrough iterates that ad-blocking on desktops is close to its all-time high from 2018. As of now, ad blocking has 290 million global users.

Marty Krátký-Katz, CEO and Founder of Blockthrough, suggests that alongside the desire to have an uninterrupted user experience, internet users thought the quality of ads either declined or stayed stagnant. In the 2021 report, they surveyed over 5,000 people and 67% agreed with this sentiment.

“Despite the progress made by initiatives like the Better Ads Standard, the perceived benefits of a cleaner ad experience don’t seem to have trickled down to end users — and as long as that doesn’t change, we will continue to see growth in ad-blocking,” says Krátký-Katz.

So how do publishers reach their ad-blocked audience?

According to the study, acceptable ads are the way to go. The beauty of acceptable ads is the medium allows the end user to curate their ad experience. Regulated by the Acceptable Ads Committee, it defines a lighter ad experience that is appreciated by at least 65% of surveyed adblock users. 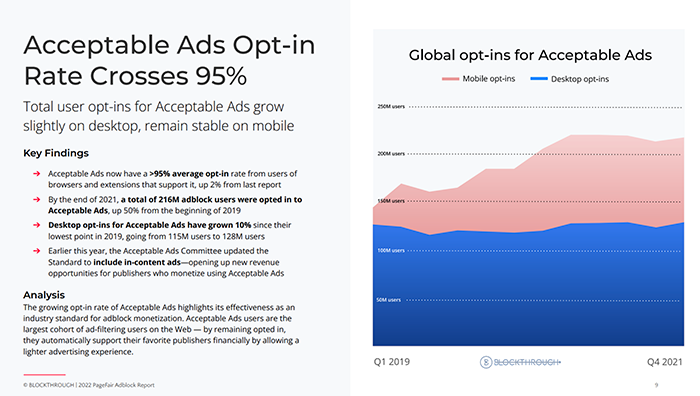 “Acceptable Ads is the only ad specifications standard where end users have a seat at the table and can contribute their opinion on the types of experiences that are perceived to be “acceptable” vs. those that aren’t,” says Krátký-Katz.

Based on Blockthrough’s data, Acceptable Ads now have an over 95% average opt-in rate from users of browsers and extensions. By the end of 2021, a total of 216M adblock users were opted into Acceptable Ads. 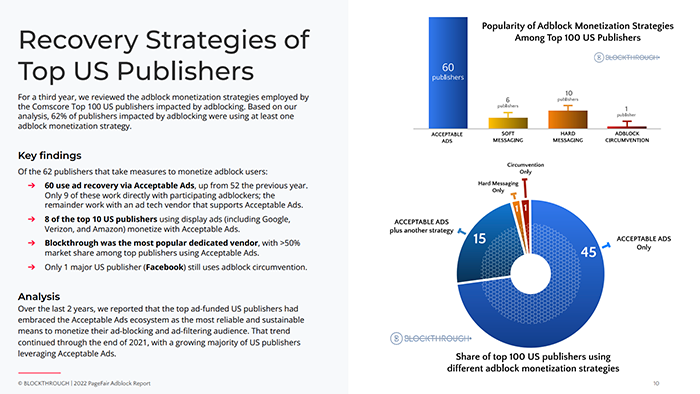 In addition, most of these publishers appear to deem acceptable ads as the most effective strategy. The slide asserts that US publishers have “embraced the Acceptable Ads ecosystem as the most reliable and sustainable means to monetize their ad-blocking and ad-filtering audience.”

“I think the most important takeaway from our research is this: You cannot engage adblock users in good faith by putting further roadblocks and interruptions in their browsing journey,” says Krátký-Katz. “It’s just not sustainable. Unless your monetization strategy is subscription-driven, publishers should resist the tendency to use their content as a bargaining chip to get users to turn off their adblockers.”