If you want to get a message out there, video is the way to go and without viewability you’ll have no audience.

75% of people spend up to two hours a day consuming short-form video content. It is quick and easy, and many of us have the attention span of a 6-year-old, so we naturally gravitate towards it.

In the new eBook “The Science of Video Viewability and Beyond: A Publisher’s Guide to Maximizing Ad Revenue,” Ex.co deeply dives into the ins and outs of retaining viewability and even presents a carved out periodic table that outlines the steps to reaching video engagement and revenue highs.

There is most certainly a science to this ad tech stuff. The alphabet soup alone is a little nerve-wracking for beginners, but “The Periodic Table of Video Engagement” is so simple that anyone will understand it. 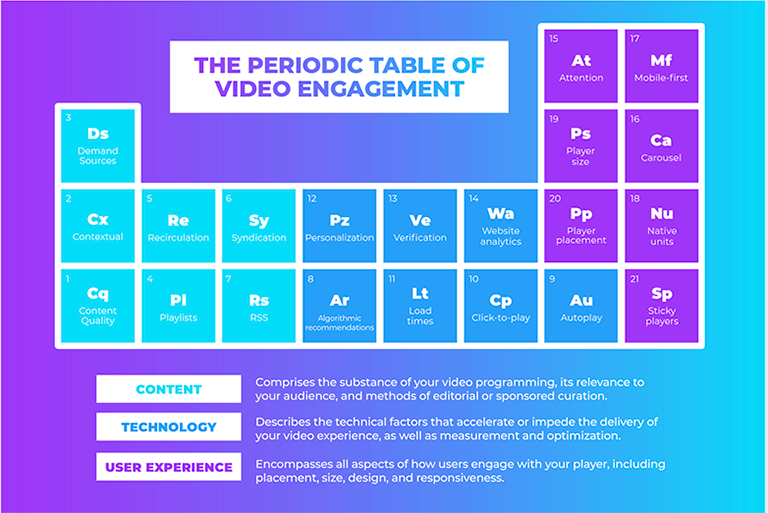 See “The Periodic Table of Video Engagement” link above for a more detailed view.

Why Is Viewability Important?

If no one sees your ads, then there is no way for you to retain revenue, which would be pointless for a publisher. Viewability is everything because, of course, you want your videos to be seen!

Within the periodic table, there are 21 elements presented, ranging from Algorithmic recommendations (AR) to Player placement (Pp) to Verification (Ve). These elements can help publishers increase their viewability, strengthen audience engagement, and maximize ad revenue.

“Advertisers want every chance to succeed. So, partners must meet minimum viewability requirements,” said Tito Flores III, Group Director, Digital Investment at MediaCom. “That’s your general admission ticket to be considered. But the minimum won’t equate to real success. Maximizing viewability is how you navigate your way into VIP (very important partner) status.”

Video Is the Future

Video is like a pot of gold for publishers.

Who is logging onto YouTube to find information and learn about something that a 60-second video can teach them?

In terms of viewability, video content is re-shared 12x more than text or pictures, so your ad will go viral if you have the proper creative backing and a resourceful video player. It’s larger than TV, too, as research shows that one-third of people spend their time on their internet consuming videos.

The eBook even hashes out the real from the fake when it comes to myths surrounding the “pseudoscience” of video, like VRPM’s being the future, for example, but we don’t want to spoil it for ya!

“Although viewability has been top-of-mind for several years, publishers and advertisers are still looking for new ways to maximize it. As verification technology has evolved, attention-based metrics are more important than ever before,” said Johanna Bergqvist, vice president of strategic partnerships at EX.CO. “This ebook takes a giant leap forward by clearly defining the steps that publishers can take to achieve the highest engagement possible, and we’re excited to make this resource available to the industry at large.”