The opinions expressed by AdBeeler are not necessarily those of AdMonsters and Access Intelligence. They are only the opinions of Rob Beeler if you find them funny or insightful.

This week I’m off to CES, and I actually mean CES. It’s not a well-kept secret that most people in our industry who do go to the event actually race up and down the strip for meetings, drinks, dinners, and drinks all followed by drinks. To give you an idea, this is what my office will look like for this week: 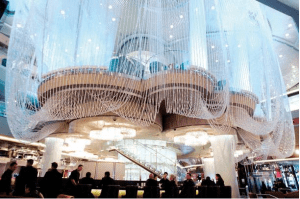 If my press credentials go through, however, I’m going to actually see cool stuff from the CES event itself, and hope to report back what I find. If you’re in Vegas, let me know!

Not sure if CES will cover bitcoin or blockchain, but if it does, I’ll check it out. Bitcoin is not blockchain. We all understand that, right? So why am I so concerned that if we in fact have a bitcoin bubble that bursts, then blockchain’s prospects might suffer? If blockchain is of course the cause of the bubble bursting, that would make sense–but otherwise I’d like to see more work done on blockchain.

That being said, not every ad tech discussion has to include the word blockchain. I’m not even sure you’re doing yourself a service by mentioning blockchain in a pitch. Right now blockchain sounds vaporware-ish. Show me a product. Convince me it helps me. Mention it’s on blockchain. I’ll respond, “Cool.”

This reminds me of a discussion at an event about the need to educate everyone in advertising on blockchain. I’m not sure educating everyone is necessary. We struggle enough with getting creative types off of Flash to add blockchain into the conversation. Not sure what a nonce is? I’m sure you’re going to be okay.

Instead, let’s talk applications. I like the idea about evolving ads.txt to the next level. Ads.cert looks like it isn’t necessarily being developed on blockchain, but it’s blockchain-esque in the use of cryptographically signed bid requests. Cool. Meanwhile, Ads.txt Plus from MetaX is built on blockchain and offers subscriptions vs. crawling, works on mobile app and web, and lets the publisher control what they disclose (versus the open kimono of a text file readable by everyone). Once again, cool.

Do I care (as an ad operations person) that these are built on blockchain or not? Not as much as the features they offer. Ads.cert is months away, at least. Ads.txt Plus is open for beta test partners. For those of you who need/want/crave the next gen of ads.txt, get in there and help these people make it work – not for blockchain’s sake but for the industry’s.

Related: I thought I had the ads.txt pronunciation problem solved:

I prefer "ads dot Tee X Tee" myself, but to programmers ".txt" is "dot text" as we don't like vowels in file extensions 😉

But hell if I’m going to say “ads dot cee e r tee” and “ads dot tee x tee plus” doesn’t flow as well as “ads dot text plus” in my mind. I guess I’ll have to evolve my thinking. Damn blockchain!

In Nashville, I wore some righteous duds:

However, at OpsX in December I got asked a few times why I wasn’t wearing the stars jacket. Let’s get one thing clear, people: Until I get a wardrobe budget that matches my vision, I’m going to have to wear regular clothes from time to time. Happy to start a Kickstarter to raise the funds needed, if y’all think it’s that important.

Related: To dispel a rumor, no, I will not be attempting to pull off the Baywatch look in Huntington Beach: 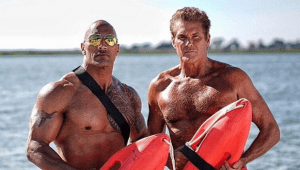 (Not Justin Loresco and Rob Beeler)

Blade Runner 2049 ran out of the theaters before I got a chance to see it. I had this idea that perhaps the best way to test if someone is a replicant is to show them less than 50% of an ad for less than a second. If they click: replicant!  Sorry, folks. You can’t unread that.

Best book I got for the holidays: The Four: The Hidden DNA of Amazon, Apple, Facebook, and Google, by Scott Galloway. If you don’t follow him on YouTube, you should–he’s funny and informative. Note I linked to Barnes & Noble and not Amazon or Google. Read the book and you’ll get my reasons. #RealCapitalism

Free tip: I used our recent article on AdMonsters, “Discrepancies on Display: Ad-Juster Talks Visualizing Campaign Numbers,” to make a point of not going to meetings if I thought they would result in another Excel document to manage. I suggest you take the same approach.

The first draft of this piece came to 666 words. I’ve added this paragraph just to be safe.