OMG – Have you been MRAIDed?

Yeah, we’re all pretty much acroynm’ed out, but this is less about the acronym and more about what it does for us.

MRAID is a video ad standard recently released and endorsed by the IAB that will help open up a vast new trove of mobile inventory for advertisers, particularly now that 19% of Americans own tablets and another 100 million own smartphones, 40% of the total of which consumers use regularly as a second screen experience while watching television.

To illustrate the applicability of MRAID let me tell you the fabled story of Jill and Bob – one that I share with my children at bedtime. It’s a family fave.

The Ballad of Jill & Bob

Jill’s company is a prolific publisher of original content – both print and video. She already runs video ads on her website where she makes the content available. Now she’s built an app to bring her content to the mobile public, and of course she wants to monetize her content (who doesn’t?). 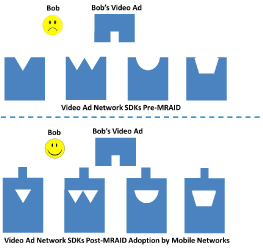 To do that she needs to integrate into her app an SDK from one of the dozen or so mobile ad networks out there whether it’s iAd, AdMob, AdMarvel or some other. Embedding an SDK for Jill is like connecting to a pipe gushing with an ongoing flow of ad impressions.

Now meet Bob. Bob’s Agency needs to get its hands on 10 million in-app impressions for a new interactive video ad campaign ACME Inc. wants to run for a new thing-a-ma-widget. To get that many impressions, he’s going to need the impression inventory available not only on Jill’s app but also the inventory available on dozens, if not hundreds, of other content owner apps.

So he schedules a meet up in which we meet more app developers: Lucy, Larry, Terry, Harry and Carrie. Bob finds that each of their apps is embedded with a different SDK from a different mobile ad network. As a result, Bob’s going to need to re-code his ad for each SDK. There’s no single mobile ad standard that unifies his ability to code once across all of the SDKs. No simple approach to connect to all of the pipes.

At least that’s the way it used to be. Enter MRAID, a standard released by the IAB a few months ago delivering on the promise of one to many. Now Bob can code his video ad once and connect to a bunch of in-app ad pipes.

Problems Solved! (Well, Not Quite)

MRAID isn’t the only effort to help in-app advertising scale for advertisers. Apple and Google are also working to foster the channel by charging less for marketers to run campaigns on their mobile networks.

According to the Financial Times, Apple recently reduced the minimum required spend for its iAd product, which displays brand advertising within iPhone and iPad apps, to $100,000 a campaign. The cut is the app giant’s second major price reduction.

Meanwhile Google reduced bid minimums for its mobile network AdMob back in February. Advertisers are responding.  On March 12, e-Marketer announced that 65% of the marketers they surveyed plan to increase their mobile advertising spend in 2012.

While MRAID is a big step forward, it’s not a panacea. Apple, for example, did not participate in the IAB formation committee for MRAID. (Sad face.) And there are a couple of other challenges in this realm. That said, in-app advertising is rev’ing up. It’s happening and it’s cool.

Time to get your video ads on the second screen experience. The Olympics are just around the corner. You can be sure that will mean in-app-advertising opportunity o-mania. Giddy up!

Walter Harp, VP of Product Management and Marketing at Mixpo, has served in senior product management and marketing roles in the online services space for nearly 15 years, most recently as team lead for some of Microsoft’s largest online consumer services which generate tens of billions of ad impressions each month. Prior to his seven years at Microsoft, Walter built and managed partnerships for the wireless division of AT&T, led product management as an executive for online publisher EarthWeb prior to its acquisition by The Internet.com Network, and founded and consulted a number of start-ups. Walter holds a Bachelor’s degree from Stanford and an MBA from Columbia.