When the GABBCON (Global Audience Based Buying Conference and Consultancy) New York event first came to the attention of the AdMonsters team, we were struck by the clearly in-the-weeds, up-to-date media and ad tech topics highlighted all over its agenda. These people are speaking our language, we thought. The difference was that it in GABBCON’s case, it was buy-siders doing the speaking—agency people, brands, senior-level marketing folks, and the sort of people who would normally do business directly with them. So I managed to talk myself into last year’s GABBCON NY, and frankly found the discussions fascinating and eye-opening: Right, this is how the insanely fast-paced evolution of digital media and advertising and “content consumption” plays out on the other side of that perceived chasm between the sell side and the buy side. In the end, it didn’t feel like there was a chasm at all.

In today’s digital environment we’re constantly talking about how the survival of digital media depends on conversations between buyers and sellers. There’s such a focus on direct communication, instead of relying on intermediaries to speak accurately and transparently on our business’ behalf. Fortunately, GABBCON CEO and Co-Founder Gabe Greenberg offered to help facilitate that communication by lending some of his own perspectives. Gabe has spent about two decades in media—he’s held leadership roles at The Trade Desk, Vibrant Media, Delivery Agent, Autobytel and other companies; he’s an advisor to a number of industry groups and he’s particularly well-versed in the language of TV/video.

This discussion with Gabe will be an ongoing one, but to start us off, I asked Gabe about what stories stuck out to him at the 2018 GABBCON NY event, which took place about three weeks ago. He also shared some thoughts about what buy-siders are thinking about when they hear the words “brand safety” or “consolidation”—and, like a lot of forward-thinking people in digital right now, he had quite a bit to say about blockchain.

What are the top three takeaways from GABBCON—and in particular, were any of these major themes something you didn’t really expect to be so prominent right now?

GABE GREENBERG: Number one, there is an abundance of senior diverse talent in the market. Any conference that claims there is a shortage is not working very hard on their programming. Diversity is integral in each and every  event.

Number two, blockchain is here to stay. Anyone who suggests that blockchain cannot support ad tech and address the many ad taxes and ills major brands and agencies talk about (trust, fraud, transparency, speed, reconciliation) is probably from a company that stands to be disintermediated, and is purposely trying to cast doubt to avoid their own ill fate. That is not to say that all the answers exist for blockchain—but have no doubt, this will change the business we all know today, and it will change it soon.

Number three, the continued consolidation in the TV market will pave way for continued innovation, shorter ad breaks and new waves of audience targeting and addressability. 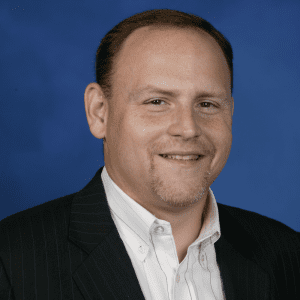 Points two and three were ones we’ve predicted for some time. In fact, shortly after GABBCON NY, announcements were made by Fox and NBC about shortening the ad breaks, and there has been ample press about blockchain. Jonathan Steuer from Omnicom put it best when he said, “We are experiencing a new paradigm in network design, and blockchain represents positive change for the industry. Your team should be thinking about how you can leverage this new open source protocol” (referring to the protocol that MadHive is bringing to market).

What are media buyers’ biggest concerns about consolidation among publishers and broadcasters? How is this changing their buying habits and strategies?

The biggest concern is always the creation of a new walled garden or an overly dominant force. Buyers (and consumers for that matter) are more savvy then ever, and this is forcing publishers to rethink the media unit and what it represents. I expect we will see new ad units and experiences that value consumer attention and time more than ever before.

We’re seeing publishers restructure their sales and ops teams so they can be more flexible for however buyers want to transact (i.e., programmatically, directly, or with some hybrid of the two). How’s that working out for buyers? What else should publishers be doing to be as flexible with transactions as they can be?

The restructuring is a cost of doing business. To be fair, with a new blockchain-based fat protocol to replace OpenRTB, we will see far more change in the months ahead. The benefit of this new protocol, however, is that it will bring buyers and sellers closer together again. Publishers should embrace this new protocol and get ahead of it as quickly as they can. Unlike RTB, which many thought could represent a race to the bottom, this new protocol represents higher margins and the elimination of ad taxes from verification companies, data companies and many others who will no longer be able to get away with a large ad tax for a service that should be commoditized.

When you hear buy-siders talk about brand safety, what specific issues are they really talking about? And is there anything buy-siders wish publishers understood better about what they’re up against on the brand safety front?

They mostly talk about the risk of their brand being adjacent to content that is outright negative (terrorism, accidents, etc.). Buyers need publishers to understand the inherent risk of an airplane brand being next to an article about a plane crash, or safety issues or company impropriety. It’s clear that there are instances where these things can sometimes be unavoidable because of the nature of algorithms and targeting, but it is imperative that large publishers police their own sites and balance the use of AI and machine learning with human review.

We’re seeing publishers restructure their sales/ops teams to respond to the ways buyers treat the old programmatic/direct split. What kind of responses are media buyers looking for?

I do not think buyers have expectations here other than that their business be serviced. Sometimes I think we overthink this question in the industry.