“We routinely sell out our site inventory,” a senior ad ops professional tells us. “Our value proposition is our audience, which our advertisers can still reach – just on different properties across the Internet.”

Hence why her site launched a new audience extension program right before summer 2012. But this wasn’t the publisher’s first time swimming in these waters – an experience three years ago with a network partner left a bad taste in the mouths of the publisher’s sales team. Not only was the price point low, performance was poor as well.

However, with its hottest commodities regularly selling out, this publisher realized it needed to find new revenue streams, particularly on the consumer side. With a better knowledge of its audience thanks to the implementation of a data management platform, it seemed pertinent to give audience extension another shot – only this time, with some hard conditions.

And because a host of ad tech companies have entered the space with a wide variety of solutions, they were able to find exactly what they wanted.

Not New, But Burgeoning 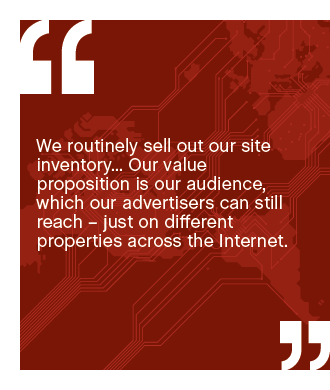 You could argue that like native advertising, audience extension isn’t a new concept. Yahoo and Microsoft have offered audience extension services for a long time, while other publisher networks have built platforms in-house. But in the last few years there has been an explosion in more publisher-focused solutions.

“The concept has been around for many years,” comments Tom Schager, Director of Digital Sales at Chicago Tribune Media Group. “But now there are new players that are not putting heavy restrictions and requirements on their partners.”

Since implementation of an audience extension program typically goes hand-in-hand with DMP integration, several DMP providers began offering audience extension products, often shifting or tying the offering into their other revenue streams like ad networks. But another big reason this market is heating up is because somewhat unexpected players are making big inroads: demand-side platforms.

As audience extension basically turns publishers into media buyers, DSPs actually make sense as a partner with great experience in targeted ad buying. And like advertisers found when they first started using DSPs, flexibility is an attractive asset.

One publisher we talked to has been involved in audience extension for more than four years. While it originally worked with a large network, in 2011 it moved its business to a technology platform that offered more flexibility and automated capabilities.

As its audience extension channel rapidly scaled, it became more cost-effective and efficient to introduce an in-house RTB-buying team that’s only focused on audience extension campaigns. This new setup allowed the publisher to schedule its own campaigns as well as give it more granular audience and geotargeting controls.

The audience extension technology market has matured so that publishers can take their pick between plug-and-play solutions, highly customizable platforms and a variety of hybrid solutions. There are now products out there for those just testing the waters as well as pubs demanding a high amount of control – including paying on a campaign basis.

But there is still room for innovation, particularly when it comes to efficiency – one publisher lamented about cutting new I/Os for every order. While technology providers ease concerns over brand safety with tools such as white and black lists, there were complaints over a lack of transparency when it came to buys. Reporting still seems to be in its infancy, while one publisher also came right out and said the platforms could be more user-friendly.

Development forges on, especially since advertisers are increasingly seeing the advantage of publisher audience extension. 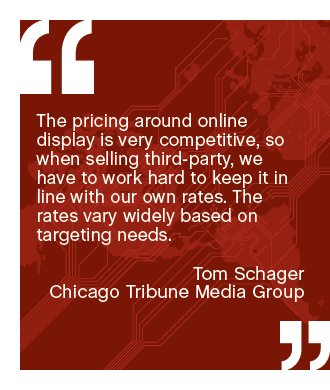 Those getting used to the zettabyte age of the Big Data era won’t have much time to enjoy it. Cisco says in 2016 we’ll start running into yottabytes – named at the 19th General Conference on Weights and Measures in 1991 and equal to 1 septillion bytes, a thousand zettabytes or a million exabytes. Before the end of this decade, MIT data technologist Andrew McAfee suggests we’ll run out of metrics for measuring large volumes of information. While the term brontobyte is gaining traction as the next level in measurement circles, I’m voting for McAfee’s preferred moniker: the hellabyte.

But despite the swaths of data roaming around the vast Internet, when it comes to digital marketing data, publishers have the gold standard. This is why advertisers are demanding more and more data-enhanced buys and a big reason for using publishers to help them find their audiences on third-party sites.

Another big reason? Audience extension performs. Nearly all the publishers we spoke to commented that advertisers were quite happy with the results – one publisher suggested CTRs were below on-site buys, but nothing to sneeze at. Not surprising then that most of the publishers said demand had steadily risen over the last year.

“Since we’re truly serving our audience on different sites, we shouldn’t see a drop-off in performance,” one publisher points out.

However, advertisers waiting for a day when a large number of publishers open up their data segments for solely offsite targeting purposes will have to be patient – answers to our queries suggested that the revenue isn’t impressive enough to warrant a standalone product. Many publishers noted they do not sell audience extension separate from an on-site buy.

“It’s an add-on – we won’t play the middleman,” an ops professional comments. “Our content is still the most premium – we don’t want to lower its value by having audience extension perform better.”

In fact, direct buys have to be of a certain size before audience extension can even be considered.

“Recently we have seen more interest in audience extension from our regional advertisers,” on ad ops professional comments. “This can be a challenge because for the partnerships/methods we have used, small volume buys can sometimes be declined due to the churn per revenue.”

Publishers viewing their content as more valuable than audience data is a two-way street – pubs also can’t sell inventory bought on third-party sites for as much as owned inventory. One publisher set the benchmark at 30% lower than on-site, which still beat the margin when it came to buying the inventory.

“The pricing around online display is very competitive, so when selling third-party, we have to work hard to keep it in line with our own rates,” says Schager. “The rates vary widely based on targeting needs.”

There’s also more traditional value to audience extension for advertisers (and publishers too): tightening the bonds in a relationship. Through audience extension, marketers can see their trusted partners on the publishing side want to work harder for their spend, by using innovation and ingenuity. And publishers assist their best spenders – their direct buyers – in delivering bigger, higher-performing campaigns.

Schager sums it up well: “The greatest benefit is the ability to go much deeper with our clients and build them superior media campaigns.”