It’s a common adage in retail (brick and mortar as well as digital) that the customer doesn’t cease to exist once he/she leaves the store. The same logic applies to digital publishing: when someone exits a media company’s digital property, that user doesn’t vanish into thin air, and neither does his/her cookie-packed browser. And thanks to the evolution of the digital advertising ecosystem, it’s not that hard for the publisher to reconnect with that user – just on some other Internet turf.

During this great online data awakening, improved technology (e.g., data management platforms) has enabled publishers’ ability to truly understand their audience and use this insight to enhance their content and ad products – we’ll focus on the latter, particularly as advertisers increasingly demand data-driven buying options. Some publishers are even seeking out third-party data to bring more focus to their audience segmenting efforts. 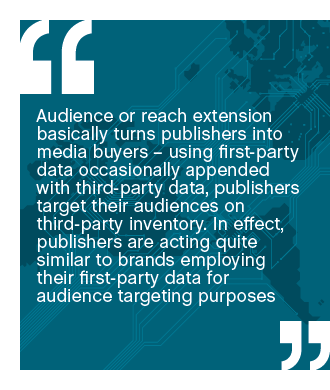 Typically packaged with on-site sales, audience extension deals have their roots in scoring larger buys in the face of inventory shortages. But as publishers become increasingly skilled in refining their very potent data, clever revenue teams are finding new ways to slice and dice for high-performing ad products that take advantage of inventory beyond their sites’ borders.

A Rubicon Project report from 2011 found that 21% of publishers surveyed were taking advantage of audience extension tools while another 35% planned to jump on the bandwagon. Further, Forrester reports that the practice currently accounts for 5% of site buys, but a host of new players with flexible offerings show the potential for this channel to grow exponentially.

And why not considering that available RTB inventory keeps growing and growing – especially since Facebook opened up its exchange last year. The majority of publishers we spoke to are excited about the potential inherent in audience extension, with many expanding their current efforts – and spreading the good word to their inquisitive peers.

Publishers’ first and most basic use for audience extension is securing a deal – or pushing for a bigger one.

Say an advertiser proposes a $50,000 buy for a certain audience segment but the publisher only has $40,000 worth of inventory. Rather than “leave the money on the table,” the revenue team can annex a $10,000 audience extension buy to the contract. Through a third-party provider or an in-house network, the chosen segment is tracked down and bought by the publisher through the exchanges or partner sites.

“It’s a way to generate new inventory if what’s available on-site grows at a slower pace than what is necessary to take advantage of advertiser budgets,” comments one publisher ad ops leader.

While audience extension tends to bring in lower CPMs than on-site inventory, the tool is more cost-efficient than employing on-site audience development to meet advertiser demand – and it’s a far better option than under-delivering on insertion orders. It’s also an alternative to user-irritating on-site inventory-boosting measures such as packing pages full of ads to the point of bursting or breaking up content into multiple pages to boost impressions. While theoretically overflow of such impressions could be sold on the secondary markets, poor performance would likely drive less impressive CPMs than audience extension efforts. 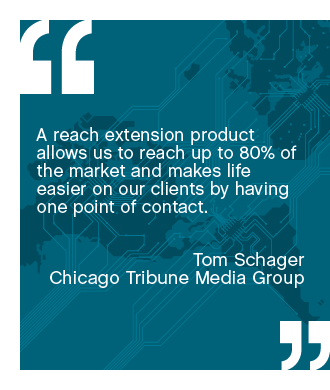 This technique can come in particularly handy when dealing with high-value or niche audiences and limited site inventory. Consider the in-market buyers (cars, jobs, technology, etc.) that direct-response advertisers drool over – there may be only so many chances to catch them on a site, but pubs can do the legwork of finding them elsewhere. Audience extension can also work wonders for niche or special interest publishers with endemic audiences that target-specific advertisers are dying to reach them with higher frequency.

“To secure the type of results our clients need and expect, we need to be able to reach more of the market,” says Tom Schager, Director of Digital Sales at Chicago Tribune Media Group. “A reach extension product allows us to reach up to 80% of the market and makes life easier on our clients by having one point of contact.”

Geotargeting also proves quite an allure for audience extension – sites with specific regional content and audiences (e.g., a network of local interest websites) can combine their audiences with hyperlocal geotargeting aspects as narrow as zip codes or specific dominant marketing areas. This can get quite complex – one publisher mentioned she’d recently dealt with 25 line items in a campaign.

A site with a registered user base has its own tools. Instead of sharing users’ personally identifiable information (PII) for advertising purposes, publishers can simply cookie them – say for B2B marketing efforts of C-suite professionals in a specific field or company size – and then target them offsite. No PII leaked or exchanged.

Finally, just like their media-buying counterparts, publishers can employ lookalike or act-alike modeling for targeted offsite advertising. With an audience segment (or multiple ones) as a blueprint, publishers combine their first-party data with third-party to build new segments with similar characteristics or behaviors to the endemic audience base. This can massively scale the targeting pool.

Beyond advertising, lookalike of this tool, however, is usually to to expand a site’s audience. One publisher we spoke to mentioned using cobranded ads for sponsored editorial content targeting lookalike users from partner networks to drive traffic back to the site. “It is a win-win: brand visibility on extended networks, driving traffic back to our editorial package, and acquiring new lookalike audience (hopefully with return visits),” says the operations director.

While all the publishers queried – which ranged from news outlets to general information and help sites to product research and more – said the margins made it worthwhile to maintain audience extension as a product, they were mixed on how solid a money-maker the channel is. One cited it as the product with the most impressive revenue growth while another suggested her company isn’t doing backflips over the results.

But nearly all publishers said advertisers were generally happy with the results – and interested in exploring further use. And their publisher peers are intrigued by their success, with audience extension being a hot topic of discussion in industry forums and at live events.