They’re the bane of the entire advertising ecosystem. Plus, they really piss off consumers, ruining their digital experience—ultimately leading to lost revenue for publishers and many of their ad tech partners.

It’s a well-known fact that publishers lose over $1 billion per year from just malvertising alone. That number doesn’t even account for the total sum of dollars lost to other ad quality issues like redirects, non-compliant ads, data leaks and the like. Let’s not even mention the time spent in man-hours in defeating those nettlesome nuisances.

WITH THE SUPPORT OF AdLightning
Optimizing revenue and performance for publishers, eCommerce and ad platforms through better ad intelligence.

In 2019, ad quality issues were awfully problematic for publishers. At least that’s the news coming out of Ad Lightning’s 2020 State of Ad Quality Report. 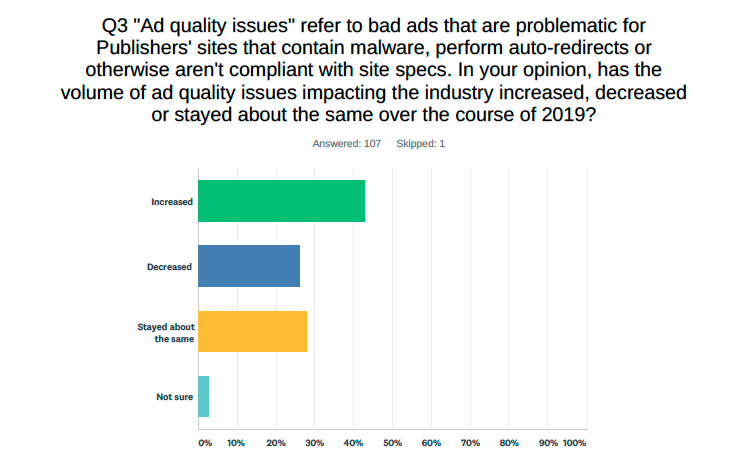 According to the Report, survey participants (primarily consisting of publishers) noted that ad quality issues essentially increased or stayed about the same in 2019, with a great amount of energy going toward battling auto-redirects and preventing malicious behavior like video stuffing, phishing and malicious extensions.

Overall, survey participants felt that the issue of redirects had lessened over the past year—only 29% state that it will be a primary focus in 2020—which is a testament to the benefits of working with an ad-blocking solution that is equipped to handle disparate bad ads at the same time.

As a last resort, some publishers have even had to turn off an SSP or DSP due to bad ads, dramatically impacting revenues. Over 65% of respondents stated they had done so.

It’s not that malware or mobile redirects won’t be an issue in 2020, it’s just that more attention will be spent focusing on privacy issues like GDPR and CCPA, as well as potentially bad political ads.

In fact, ensuring regulatory compliance took the top spot for ad quality issues in 2020 in the Report, followed by preventing auto-redirects and preventing malicious behavior like video stuffing, phishing and malicious extensions.

Over 50% of respondents said that GDPR and CCPA compliance would be a key priority for their ad ops teams in 2020, meanwhile, over 40% felt that they weren’t yet ready for CCPA—which went into effect January 1. 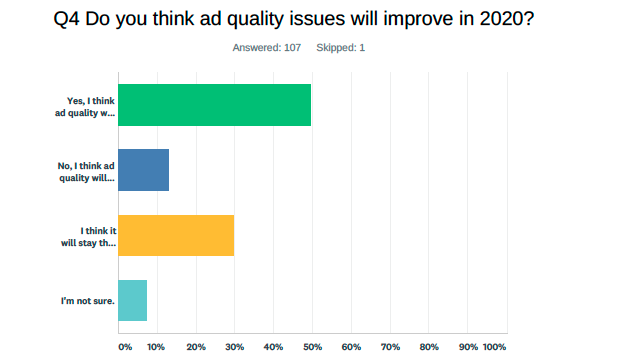 Surprisingly, half of the survey’s participants felt that ad quality issues will improve in 2020, with 70% stating that SSP adoption of new ad quality solutions will positively impact ad quality overall. Concurrently, 64% felt strongly that ads.txt’s focus on transparency would prove fruitful in tackling challenges in the coming year.

In order for ad quality to truly advance in 2020, it’s going to take the cooperative efforts of the entire advertising ecosystem—including publishers, ad quality tech providers, SSPs, DSPs, as well as other platforms. Without such collaboration, the entire ad ecosystem will continue to suffer.