The role of ad ops is complicated and ever-changing, and as expectations and responsibilities morph, it seems there’s always something ops teams need to outsource. The tasks they choose to outsource, however, are subject to almost as much change. As 2015 draws to a close, it’s a good time to assess where we are, as it pertains to what ops can handle in-house and what they have to pass along to someone on the outside. Craig Leshen, President of OAO, is the sort of person who can speak authoritatively about the year’s biggest trends in ops outsourcing, and what ops teams might need to outsource in 2016. AdMonsters Publisher Rob Beeler sat down with him for a conversation that shows, as Leshen says, how important ops has become, and how ops continues to grow in its significance and responsibilities within organizations.

WITH THE SUPPORT OF OAO
www.adops.com

ROB BEELER: Craig, it’s that time year again, when people are budgeting for next year, and I always find more people in our community bringing up outsourcing as a topic of discussion. I know back in the day I had to plan ahead to see what I might consider outsourcing, keep in house or frankly push off another year. My first question: What were the hot outsourcing topics for 2015?

CRAIG LESHEN: The main request in 2015 continued to be for managed services support for directly sold campaigns.  While it’s nowhere near as talked about in the press as programmatic media buying, directly sold deals still drive a very significant amount of revenue for both premium and non-premium publishers.  The need for a managed services ad ops team to handle campaign implementation, QA, and overall management still led the pack this year.

Immediately following were requests for programmatic implementation and management services.  We’re seeing that publishers continue to hedge their bets by electing to implement more than one programmatic solution, typically a combination of one or several large systems (sometimes electing to utilize different systems for each platform — display, mobile, video, etc) and other backfill solutions (smaller or vertical-specific networks).  There are a lot of options for publishers, and they’ve typically reached out for guidance, as well as implementation and management services.

Some of the other “hot outsourcing topics” of 2015 were project-based engagements regarding viewability evaluations,  ad blocking analysis, Google Publisher Tag (GPT) architecture and implementations, in-app ad testing, and working with HTML5 and other new ad formats.

RB: We’ve talked about programmatic not being automatic and you mentioned that you have clients who use you for those manual tasks, but does programmatic have other outsourcing areas?

CL:  Education.  We provide our clients with consultative guidance regarding all things programmatic.  Publishers need to address questions and concerns from both management and sales regarding how programmatic might impact their business and then select the correct partner(s) to work with. It’s also critical that they understand the implementation process, the day-to-day management of the platform(s), and how to properly gauge expected revenue.  Over the past year, we’ve seen more and more publishers begin to embrace programmatic than in previous years, but some of the more traditional publishers are still exercising caution.  Their hesitation is that they’ve been building their businesses for decades, in some cases, and they’re nervous that implementing programmatic is like letting a fox in the hen house.  The fear is that once an agency buys from them programmatically, their rates will decline and they’ll lose negotiation power.  There’s definitely a risk, but if they educate their team on how to implement and maintain programmatic solution(s) in a way that best suits their business needs, it will most likely foster additional revenue growth.  Remember, programmatic is here to help your business, not hurt it.

CL:  That might be part of it, but I think the short answer here is that while advertisers are able to take care of their programmatic campaign implementation, direct campaigns still require time and attention from the publisher’s ad ops team.  All aspects, complexities, and nuances of implementing direct campaigns still exist and need to be managed.

RB: I’m looking at some preliminary numbers from our annual salary survey and here are some stats: Roughly 40% of respondents are using outsourcing. Of those that outsource, here’s what they are outsourcing now: 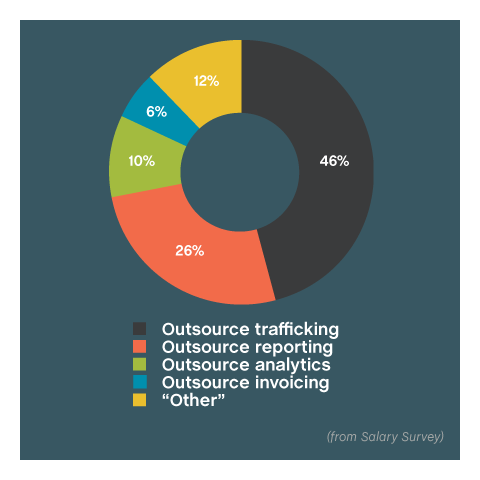 How does that track against what you are seeing?

CL:  46% outsourcing trafficking echoes what I mentioned earlier.  The biggest ask continues to be managed services for directly sold deals, and by managed services I mean both trafficking and then ongoing campaign management — pacing, QA testing, third-party discrepancy monitoring, etc.

The fact that publishers are continually looking for this kind of support is indicative of how important the ad ops function is to those organizations. The industry continues to grow and get more complex each year, and publisher ad ops teams need to be able to work with and support new creative types, new platforms, new ad systems, and new industry standards such as viewable inventory requirements, ad blocking measurement and workarounds, and HTML5 support.

Reporting, invoicing, and other labor intensive and time-consuming tasks are areas where publishers typically look to simplify through software, custom solutions, or outsourcing — so those numbers don’t shock me.

I’m also not surprised that the percentage of companies who look for outside assistance with analytics was only around 10%, but my bet is that you’ll see that number increase next year.  We’ve worked on numerous consulting projects that focussed on viewability, ad tag optimization for direct and programmatic improvements, along with other types of engagements revolving around inventory and campaign performance.

RB:  Another one of the “other” items was “Media buying for audience extension.”  That one was new for me.  Thoughts?

CL:  This is one of many ways publishers can take control of their own marketing dollars.  Ad ops teams are already working in ad systems and handling a wide variety of campaign deployment and management tasks.  The logical evolution is to have the publisher’s ad ops team take on these similarly executed functions, which utilize their ad system and programmatic components.  Audience extension is buying media targeted to your users on non-owned and operated content, and if your ad ops team has access to the necessary tools, then they can take care of this.  If they’re already executing those types of buys, then why couldn’t they also run marketing ads across those non-owned and operated properties too?

RB: What else were clients asking of OAO in 2015, and what other items do you think there will be an increased ask for in 2016?

CL:  Some of the other common services we offer include technical support for publisher ad ops teams, technology reselling (ad systems, etc), and backup or overflow trafficking services.

Requests related to development, such as creative template building, supporting and serving HTML5, and custom product or coding work are more common than not these days, and we expect this trend to continue for the foreseeable future due to the increasingly complex nature of our industry.

The growing number of platforms where publishers need to deliver ad campaigns has also created a need for additional resources devoted to QA and testing.  We’re performing these services across a variety of mobile operating systems and devices, connected televisions, video game consoles, Apple TV, ROKU, XBox, and a whole lot more.  All signs point to an increased need for this in 2016.

We’ve said programmatic is not automatic, but we have now also seen that programmatic is not stagnant; the programmatic landscape is quite dynamic.   There are a number of players that continue to push each other to improve and innovate, which results in new system features and functionality that publisher ad ops teams need to understand and be able to manage.  The advent of header bidding is a perfect illustration of this. While header bidding offers publishers the ability to have multiple demand sources compete in real time for their inventory, there are certainly implementation and management challenges that fall on ad ops teams to handle. That being the case, we definitely expect to see more resources devoted to programmatic management and knowledge building in 2016.

I’ll also bring up buy-side services being performed by publishers again.  Performing programmatic media buying functions, whether it’s being done while utilizing audience extension or otherwise, is a logical next step for publisher ad ops teams.  It’s already being done to some degree, and it’s definitely worth a publisher’s time to explore the opportunity.