One of the highlights of AdMonsters’ OPS Markets event in New York was a panel dedicated to the future of programmatic selling, featuring representatives from isocket, Maxifier, Varick Media Management and WebMD. The consensus seemed to be that programmatic buying has but one place to go next: premium territory.

But it would seem there’s more than one way for automation to enters that promised land – for example, while a company like isocket enables publishers to sell premium inventory programmatically, DataXu imbued premium buys with programmatic characteristics for a highly successful Ford campaign detailed in a recent case study. By injecting audience data in real-time to inform creative, Ford garnered a 20% uplift in engagement versus a control campaign using rotation.

As explained by John Gray, SVP of Interactive Media for Ford agency Team Detroit, the automotive space is rather unique, with a limited amount of premium inventory on sites frequented by auto intenders (think Kelly’s Blue Book or AutoTrader.com), sold on an upfront basis. In the past, the creative served to these spots was rotated but with roughly the same message. Encouraged by results from audience-based exchange buys, Ford sought out DataXu for something bolder.

Thus a Programmatic Premium campaign was executed across 15 sites and worked as such: A consumer landed on a premium placement already owned by Ford. When the ad server sent a call to Ford, it was passed on to DataXu, which examined the cookies against Ford’s first-party data, as well as third-party data sets and lookalike data using real-time decisioning technology. This information then pushed back creative based on historical performance as well as consumer insight. 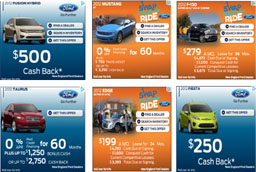 The results were a 20% lift in effectiveness and engagement, but interestingly enough, the definition of those metrics are far more complicated than a simple click-through. Gray noted that for the last few years Ford has stepped away from the goal of sending people back to the company website and instead seeks to encourage research.

“It made more sense to take a consumer-centric approach,” he said. “If I show an ad for an F150 truck, I just want that consumer to research the F150 – on Ford’s site, Kelly’s Blue Book, wherever.”

Gray also explained that this first go-round with Programmatic Premium buying was about testing the plumbing, making sure all the piping was up to par. Now his team is in the second round of sorting through the results, analyzing, for example, how much engagement was derived from first-party data perform versus third-party or lookalike. Further on, they’ll examine Programmatic Premium results against an advanced control group such as leads on Ford’s websites.

“We’re thinking about data sources differently than we have in the past,” Gray said. “We’re seeking more insight into value of data, where it comes from, and then what to do with different types.”

“It feels like we are only at the beginning,” he added.