“RTB is just the mechanism – literally the buy approach,” explains Christine Peterson, Director of Media Services at LBi. Programmatic trading, on the other hand, is “the reduction (but not elimination) of human decision-making” in the serving, buying and selling of digital ads, according an AdExchanger column by Ran Cohen of Legolas Media. This automation and efficiency allows both buyers and sellers to leverage audience data for targeting purposes. 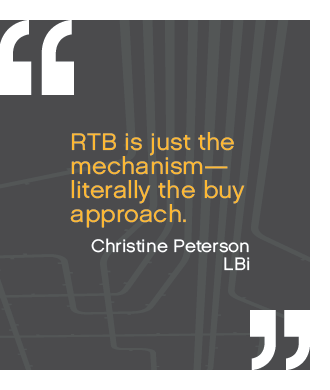 RTB is but one flavor – let’s say rum raisin – at the ice cream shop known as programmatic trading.

Beyond shady practices by both sides such as impression overdosing and data theft, sellers complain of low CPMs and buyers sneer at the quality of inventory. However, what incentive do big brand publishers have to throw their vaunted premium inventory into RTB when, for the most part, branding dollars aren’t coming near it?

Peter Horan earlier this year predicted on Digiday that in the digital ad market of the near future, 75%-80% of online ad dollars will be spent in a “highly automated environment,” with 20%-25% accorded to customized campaigns and deep integrations.

“There is an efficiency imperative,” Horan asserts. “Agencies want to spend more money with fewer people working just so that they can stay in business. To do that, they need to buy in a highly automated way. In addition, the supply of impressions and the availability of targeting data make it very attractive for them to buy programmatically – particularly for campaigns that value reach or efficiency.”

According to a recent report by eMarketer, RTB will account for 13% of US display spending in 2012 – tripling the figure from 2010. With a growth-rate of 98% year-over-year, you can almost hear those with the “RTB=Programmatic” mindset gasping in fear: You don’t really think publishers are eventually going to dump all their premium inventory – even precious homepage impressions – into the exchanges?

Of course not, even considering how many questionable moves publishers have pulled over the years regarding selling their inventory. However, the time for mass automation is nigh. 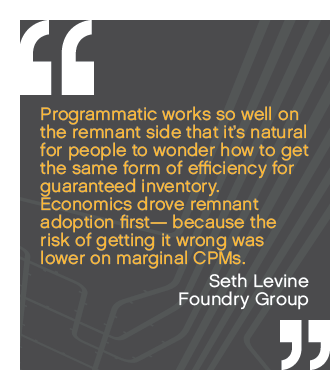 For example, before Federated Media shut down its direct sales division in November in favor of its more robust programmatic and native advertising businesses, founder John Battelle wrote on his blog that models based on “direct-sold ‘quality display’ are under increasing pressure” as revenue through programmatic channels have increased by two- or three-digit factors year over year. The banner may not be dead, but direct selling of standard units is lagging – arguably because of the inefficiency of the current process.

The premium “buying process is still handled manually, by fax and email primarily, adding so much complexity and cost to the process that is almost hard to imagine,” comments Seth Levine, Managing Director of venture capital firm Foundry Group. “This one of the reasons that other forms of brand advertising remain in much greater favor than online.”

Say what you will about RTB-fueled flea markets, but they have proved that automated trading technology exists, and more important that it works at scale.

“Programmatic works so well on the remnant side that it’s natural for people to wonder how to get the same form of efficiency for guaranteed inventory,” Levine adds. “Economics drove remnant adoption first – because the risk of getting it wrong was lower on marginal CPMs. But now we have it figured out.”

Sounds Great, What Does It Mean?

Just what programmatic premium is, though, is up for a lot of debate. Perhaps the most holistic definition comes from Mario Diez, CEO of QuadrantOne: “Programmatic premium channels are new automated access points to publisher inventory where the pub is getting paid more because the advertiser is getting more value – viewability, preferential treatment or ‘premium placement.’”

Levine adds another good overview: “Programmatic premium is about creating a machine interface for buying tier 1 inventory. The vast majority of tier 1 can go through programmatic channels and I think will.” 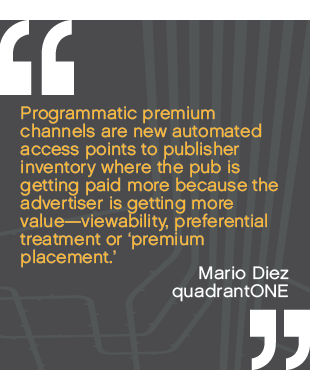 “I’m fully sold on programmatic premium in theory,” says Sara Livingston, Manager of Digital Marketing at Seamless. “It’s something as an end marketer I’ve been pushing for, mainly because of all of the operational efficiency it creates. It lowers the cost of media buying, essentially reducing the amount of time needed to execute a site direct buy.”

And of course audience data enters the equation. “What really attracts us to programmatic buying is the ability to realize the advantages of data and ultimately find the right consumer,” says Bob Arnold, Associate Director of Global Digital Strategy at Kellogg’s. “With programmatic premium, you get a location more contextually relevant, with greater transparency.”

Strangely enough, much of the move toward programmatic premium feels like it’s being driven by forward-thinking publishers seeking alternate revenue channels, a way to reach a larger pool of advertisers and increased efficiency. These publishers appear to have navigated – perhaps suffered – the pitfalls of exchanges and RTB, yet still realized the perks of automation.

“Premium publishers are looking at and creating secondary markets that are more interesting to marketers, ones that can actually bring results – for both performance and branding campaigns.” says Vikram Somaya, General Manager of The Weather Company’s WeatherFx division and previously Vice President of Global Operations and Audience at Thomson Reuters. “It’s a strategic move – offering access through any medium – but also a tactical one – plugging into all forms of budget.”

At the same time, marketers are pushing a demand-side version of programmatic premium by infusing their guaranteed buys with audience data – both first- and third-party – via demand-side platforms. The most notable example comes from Ford: on direct buys across 15 sites, ad calls for premium placements already owned by Ford were sent to DSP DataXu, which examined the cookies against Ford’s first-party data, third-party data sets and lookalike data using real-time decisioning technology. The creative served was based on this analysis matched against historical performance and consumer insight. In a case study released this summer, DataXu and Ford highlighted a 20% increase in effectiveness and engagement.

Merely Tools of the Trade

While these shades of programmatic premium sound groundbreaking, Peterson counters that just like RTB, we’re talking about tools. 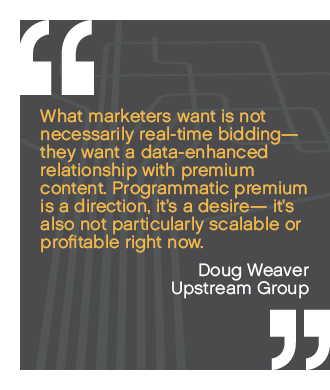 “A lot of the talk about programmatic premium is focusing on the nitty gritty – distinguishing facts and nuances that separate various buying mechanisms,” she says. “By the time these are integrated and standard, we’ll be on to the next model.”

So programmatic premium is less of a revolution and more of a battle cry in the fight to push the notion of programmatic buying beyond RTB, beyond the flea markets of the exchanges. This is a level where standard display, video and rich media units can all be bought and sold on a programmatic basis. At the same time, Levine argues that publishers creating new custom units – think some of the native advertising initiatives tearing up the press of late – should also take advantage of programmatic processes.

“If you’re inventing new forms for buying new types of ad units, why not integrate a buying process that’s as frictionless as possible right from the start?” he asks.

While Levine predicted programmatic premium – and more specifically, programmatic guaranteed – would be the hottest topic of 2012, there still seems to be a lot of progress to make before arriving at the promised land. In particular, many publishers are merely experimenting at this point with smaller pools of inventory, while trading desks realize purchasing premium inventory means developing new buying tactics as well as metrics for judging effectiveness.

“What marketers want is not necessarily real-time bidding – they want a data-enhanced relationship with premium content,” says Weaver. “Programmatic premium is a direction, it’s a desire – it’s also not particularly scalable or profitable right now.”

Click here for Part 2, which will focus on publisher efforts to bring programmatic premium to life and question the very relevance of the term premium in the automated age.