Like most publishers, we’ve been quite anxious about how the upcoming changes to Apple’s IDFA will impact mobile pubs and their clients’ ability to target people on their apps. So much so, we’ve written about it a time or two.

But OMG, we were totally buggin’ when we found out that 37% of marketers are in the dark about what the new protocols mean. Alicia Silverstone’s Cher Horowitz Clueless reference notwithstanding, it’s a little shocking—at this late stage in the game—how much the levels of awareness about what’s happening with IDFA varies among marketers, especially given how dramatically these changes will affect mobile attribution.

Looks like a lot of mobile players are waiting until the change actually comes spiraling towards them at great velocity—at which point they’ll finally figure out just how severe the revenue damages are and which alternatives are working for others.

That’s the word from a recent study conducted by AppsFlyer, which also found that mobile app pubs expect to lose about 50% of identifiers under the new opt-in protocol with targeting, measurement, and attribution very challenged. Ouch! 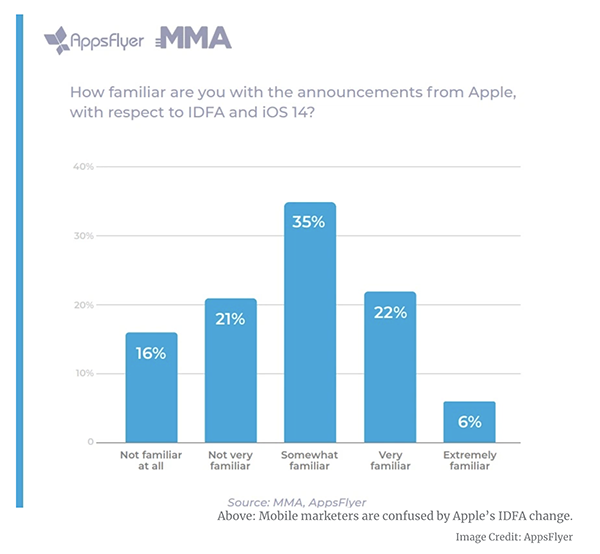 Marketers are also expecting that probabilistic data will take on greater weight—though the consensus among them is that this data will be less accurate.

Apple’s been positioning SKAdNetwork as the heir apparent to IDFA, but only a third of marketers in the study said they’d be likely to adopt SKAdNetwork, while another 46% said they were unsure about implementing the solution. Besides, word on the mobile ad tech ecosystem streets is that the framework has major flaws.

Meanwhile, 21% of mobile marketers said they’d be able to continue using deterministic identifiers like emails or providing incentives to consumers in exchange for permission to access their IDFA.

These developments bring to mind some trends we’ve been following at AdMonsters:

Privacy expert Jessica Lee on the value of consumer data: “Offering consumers a few dollars while failing to address the more problematic issues surrounding data use seems to miss the mark.” As well, the pay-for-privacy schemes will create privacy inequality between the haves and have nots, according to their income. — From a recent article written by Lee for AdMonsters, The Value of Talking About the Value of Consumer Data

Currently, according to Lee, there is no standard framework for measuring the value of consumer data. Pubs could be playing a really risky game if they choose to go the incentives route.

ID5’s CEO Mathieu Roche’s statement about relying on deterministic data only: “You can only go so far with deterministic approaches. They may be good enough for use cases addressing known users like customer onboarding, but by definition, it doesn’t work for prospecting because you often don’t have an email address for your prospects. So we need to have an open-minded approach and use machine learning for what it’s good at, ie. provide scale.” — From a conversation AdMonsters Editorial Director, Gavin Dunaway, had with Roche, ID5 Is Building a Community to Bolster Its Universal ID

It just so happens, 71% of mobile marketers in the AppsFlyer study said they somewhat trust probabilistic data for audience targeting, and 70% said they trust it somewhat for measurement and attribution.

These two arguments make an overwhelming amount of sense. What do you think?

Either way, the time is now for pubs to plan for the future of mobile app advertising.

We’ll have a session on the mobile app future at PubForum+ on December 10, where publishers will talk about the latest developments in programmatic in-app, as well as how they’re preparing for the upcoming IDFA changes.

Lynne d Johnson is Senior Editor at AdMonsters. In previous roles, she was GM Digital at Vibe and Spin, head of content and community for Fast Company Digital, a digital and social media strategist at Waggener Edstrom and R/GA, and SVP Social Media for the Advertising Research Foundation. She also writes and speaks about AR, blockchain and diversity in tech, media and marketing. Follow her @lynneluvah