Theorem’s 2015 survey of viewability trends, conducted for InSkin Media, show that challenges in measurement abound on both sides of the Atlantic. We asked Theorem VP of Digital Strategy Dominic Finney about differences in viewability between North America and Europe, how publishers can avert the effects of divergent measurement methods between viewability providers, and how the industry moves past viewability into qualifying engagement.

GD: I noticed in your report there seem to be a lot of people who are not happy with the current viewability standard. What in particular do you think is lacking?

DF: I think there are two fundamentals. Firstly, they’re okay with the standard as a starting point. The standard benchmark in the UK and Europe is at 50% pixels in view, and it’s very focused on standard display. That’s quite a low bar. They do understand why it had to start low, but clearly there’s a real need to move on. In the US, your benchmark is at 70% of all inventory in view, so that’s better. But even there that’s a big gap. You look at it the other way, that’s 30% not being accountable.

The second thing, which is probably an even bigger challenge, is that the standard doesn’t work across all formats. That 50% is okay for banners, because they’re not that big. If you talk about wallpaper, which extends beyond the page, it could be deemed to have been less viewable even though a lot more real estate has been viewed. So want a lot of the market believes is you need a standard that accounts for these types of differences.

For video, the standard doesn’t really go into the different formats. If a video plays automatically and is left playing, that could be recognized as having more value than someone actually clicking to play a video before stopping. But which would you say really has more value it terms actively being viewed?

GD: How big an issue do you think divergent measurement technology is when it comes to viewability woes?

DF: Our research suggests this is the number one issue. If you have the buy and the sell side using different measurement methodologies then you will have not the measurement in consistency, but also discrepancies between the two reporting systems.

GD: Are there ways publishers can protect themselves against such discrepancies?

DF: I think there are a number of things they can do. The first is to understand their inventory, to properly look at the way they’re laying out their sites and the ad formats they’re using. So do a site audit – i.e. a practical yield optimization piece done through the lens of viewability. The site audit is fundamental. If you do that correctly, you’re going to maximize value.

The second is working with the right vendor partners, and aligning the buy and sell side as much as possible. If you lean toward mobile or desktop or certain formats, some vendors are designed to measure these pieces more effectively.

The third thing is just working with the industry to keep on improving viewability standards. It’s a publisher challenge, because obviously it affects their ability to monetize their inventory; but it’s also an advertiser challenge, because they just want to ensure that they get viewable ads. Ultimately, they’re both after the same thing; it’s just that they have different aims. The more they can get aligned, the better, as the markets that grow are the ones that have trust and accuracy in them. 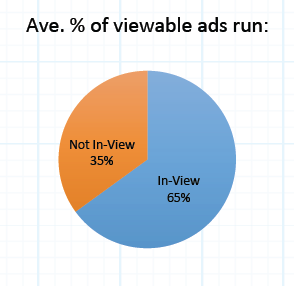 GD: There was quite a lot of ire around viewability measurement before the standard came out. I feel like there’s acquiescence now, like eventually there will be publishers with good viewability, and we’ll see the benefit. Do you think premium publishers are already getting benefits from viewability management?

DF: I don’t get that sense of acquiescence. I think the ire going across the newswires in the US has probably played out for a little bit, but it’s still having a real impact on US/UK publishers. The concern is that publishers’ value is recognized. The challenge for publishers is their model will have less inventory to play with as a general rule, and they need to get a stronger yield from it, because it’s not low-cost-to-produce content. But publishers are getting more prescriptive and establishing approaches for addressing this challenge.

GD: Are there other key differences you see between viewability in the UK and the US?

DF: Scale plays into it, of course. The sense I get is that in the US, more inventory has been traded on a VCPM model, and therefore it’s having a much greater impact. The market is a little bit ahead in the US.

GD: The majority of respondents in your survey don’t see a VCPM being applied to all digital inventory in the near future. Do you think that’s a UK-specific thing? GroupM, for at least a year, has been pushing its 100% in-view campaigns.

DF: And pushing it in Europe as well. Firstly, in the UK, 100% might include every format and across every device, and clearly some of those aren’t suited to measurement. Secondly, I think the VCPM trading model is more of an active feature of the market in the US. I don’t honestly know when market view will be around 100%, but I think it will happen more quickly in the US. 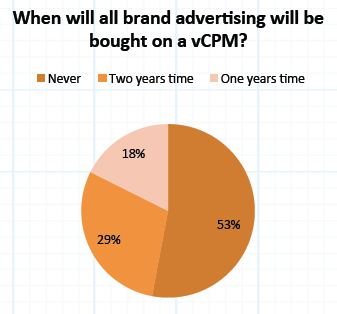 GD: What do you think US publishers can take away from the UK findings?

DF: US publishers can work with the market a lot to take this forward. If we get vendors to work toward more aligned standards, you’ll get more accurate figures. If viewability is measured more accurately, publishers can demonstrate the value they deliver. So if you’re a publisher with really good content and ads in good placements, and the standards reflect that and you can measure that accurately, you can say, “Look, I am delivering value.”

There’s work to be done, but the very nature of publishers is they produce content, and they’ve always worked with an ad model. So as a general rule, they should be delivering great value and viewability.

GD: Is there a benefit of buying inventory that’s not viewable when the page loads?

DF: Obviously users scroll down. Also, in direct response campaigns, the model they’re working against is CPA. Maybe there’s some waste from a viewability point of view, but from the objectives of the campaign, it delivers against the targets.

The market has become very, very focused on viewability, which is just one metric of value. If you speak to any marketer, they have number KPIs and metrics that are important to their campaign, but the market has become very obsessed with viewability. You don’t see this level of obsession in other media channels and you could argue other media channels are much more successful at measuring brand metrics like uplift, propensity to purchase etc. which are key to clients.

GD: But viewability is opening the door to better engagement measurement. Do you have clients now who are pushing more advanced engagement metrics? 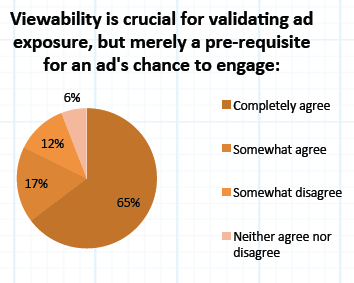 DF: Clients have always been looking at more advanced engagement metrics. The positive side of viewability is that it’s made clients very aware of the value of their ads and their audience, so it has also sparked up a whole conversation around, “What is the metric that I need, and what is the value?”

Publishers also are very aware of this and very involved. For an advertiser it’s just part of their marketing budget. For a publisher it’s part of their core business model. It’s a very different situation, and you’re going to have very different reactions and approaches because of that.

GD: So we’re probably a little too focused on viewability right now, but what’s going to push the conversation forward, to talk about engagement?

DF: The conversation I’m keen to move forward is: What is it clients are trying to achieve, and how can publishers help? For clients, you can get a great viewability score and actually not hit the KPI you want. For publishers, it recognizes all the value that they can give around relevancy and brand association.

The big thing for me is to get viewability to improve the way the whole market operates, and that’s a collective thing. After that, actively shifting the conversation to what are the range of KPIs that the market should be working against.