No, this is not a Malcolm X-like manifesto to try to rally the digital ad operations world together. That phrase, however, “by any means possible,” was used by Giovanni Buttarelli, EU Data Protection Supervisor, in a live stream interview at the IAB Europe Interact event in Milan. I was fortunate to be the host of the event, and heard the rumblings when Giovanni said that for too long the ad tech industry had collected user data by any means possible without the concern for the user. GDPR is more than an ad tech issue, but it is the poster child of how much these regulators hate what we do. Perhaps there aren’t enough regulators to enforce GDPR at scale, but don’t doubt that by any means possible, they will stop how we operate.

The Interact event meant I was in Europe when GDPR went into effect. To the sounds of the band Europe’s 1986’s hit “The Final Countdown” (you can’t make that up), a number of event attendees rang in the new era of our industry by raising our glasses and then quickly checking our phones to survey the results. Most were happy in part because they had done their homework; and while no one knows how GDPR plays out, those who embraced it feel they will survive or thrive.

That next morning, I awoke to open my window and see this: 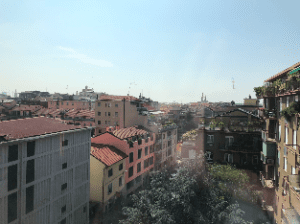 Europe wasn’t on fire. In fact, when I got a quick morning gelato (don’t judge), it was as if the woman serving me didn’t understand that a new era had begun and her personal data was just a little bit safer. I don’t know – maybe she hadn’t looked at her inbox yet that week.

The Reset Button That Could Have Been

Personal opinion time: GDPR means Google Dominates, Publishers Relent. Despite the way our industry has scrambled in the past month, GDPR has been on the horizon for quite some time. I had always hoped that it would be a huge reset button moment for our industry – a chance to force us to rethink how we work, and to pave a path toward a better approach of how we connect brands to consumers through advertising, thereby funding content creation by publishers. How naive I was to think that in a world where data is the new oil, Google wouldn’t act like a big oil company. They could have led us to a new paradigm. Instead, they waited and issued their demands of their clients so late in the game that many had little to no time to respond other than to comply. It isn’t evil what they are doing (even though being evil is no longer excluded from their policy), it’s just big corporation bullshit. Google is not the new kind of corporation we thought would usher in a new age, but the same old Carnegie, Rockefeller like power-mongers that seize control by any means possible.

We need to move forward by any means possible

We are now left with less data in an industry built on the promise of data. This will cause pain and make things harder for many of us. But we don’t need a Knute Rockne speech and we don’t need to be sold that this is ultimately a good thing. We’re operations people and we simply need more information. We need more ideas, and we need to discuss those ideas to plot out our future. We shouldn’t wait for evolution to kick in, but instead engineer our evolution so we like what we become… by any means possible.

The role AdMonsters plays in this is to try to create those necessary conversations between those that want to create that better future. At Ops next week, we start the Leadership Forum portion on day one with Michael Weaver, SVP of Business Development and Growth, Al Jazeera, to talk about sustainability over the long haul. Day two starts with Tom Goodwin, Executive Vice President of Innovation at Zenith USA, who will give a less pessimistic view than I just presented about the new era of advertising.

After a couple of days of exploring a ton of topics, from B2B to augmented reality, video header bidding to staffing challenges, we’ll end celebrating our own by raising a glass to our Power List – those who help share our future…wait for it…here it comes…by any means possible.