“We have more content and more ways to consume content than in the history of time–and it’s about to get more exciting. If you’re in this business, the moment of time we’re in right now will be written in the annals of history,” says Amit Chaturvedi, EVP, Revenue Operations and Product Management, WarnerMedia, “It’s exciting for me to be in the middle of this disruption.”

But disruption comes with its challenges, particularly when it comes to building teams.

“Making sure you understand the big picture–the role your company plays, the role your team plays and the role you need to play for the collective–is the key to being successful,” adds Chaturvedi.

During his keynote address, “Riders on the Storm: Leading Revenue Teams Through Monumental Shifts” at Publisher Forum Scottsdale on Tuesday, November 5, 2019, Chaturvedi will share his insights for managing teams–and careers–through challenging times. 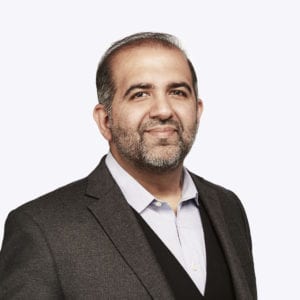 For the past 20 years, Chaturvedi has been climbing the ad revenue ranks, but this wasn’t where he thought he’d end up when he started medical school studying for a degree in biochemistry and math.

“I just woke up one day and decided I needed a break,” he says of medical school.

His experience working multiple jobs in technology during college gave him the opportunity (and break) he needed, soon landing him a position at a consumer content startup that gave him the smaller work environment he sought.

This is where Chaturvedi was introduced to advertising while learning about the different revenue models that allow publishers to monetize their free content.

“It wasn’t a switch off at one point,” says Chaturvedi, “This new path was just more enjoyable.”

Being at a startup offered Chaturvedi important business lessons that he’s carried with him and applied to his team-building initiatives over the years.

“The caliber of the team you have is critical. And in startups, every link in the chain matters more and more. Suboptimal links can’t sustain a company,” Chaturvedi notes.

He describes the three phases in the lifecycle of a startup as:

Phase 1: You have an interesting idea, but no business model and no revenue. Everyone on the team does everything.

Phase 2: You’ve figured out the product and the market fit, but you need to scale up a bit. In this phase, you do your job and the job to the left and the right of you.

Phase 3: Your business is to scale, so your job is now to become the expert and trust that the folks to the left and right of you know what they’re doing.

“Most companies that push the needle now are the ones that become the most publicly traded stocks on the market. These new tech companies work much differently and are able to evolve and adapt.”

While these three phases are important for startups, they matter equally for larger and older companies that need to figure out ways to incubate new revenue.

“Most companies that push the needle now are the ones that become the most publicly traded stocks on the market,” says Chaturvedi. “These new tech companies work much differently and are able to evolve and adapt.”

“Business strategy and financial models can change, but they all have to be driven by people who want to do amazing things,” he says.

Chaturvedi often looks back to a class in human capital management that he took for his MBA that taught him about KSAO (knowledge, skill, ability, other). “When things don’t work out with an employee, it’s not usually the knowledge, skill or ability that’s the problem. It’s ‘the other’–intangibles like whether the team member believes in the vision of the manager or trusts their team,” he says.

But he cautions that regardless of the outcome, culture is critical. Having a deep understanding of company culture matters, especially in an age of corporate acquisitions. If cultures can’t come together, there could be challenges.

After all, it’s understanding the guts of an organization and what’s happening behind the curtain that drives success.

Chaturvedi credits his consistent track record for overachievement to the people he surrounds himself with.

“I’ve been fortunate to have a few people who have really shaped my approach,” he says. “Everyone I’ve had as a mentor has started out behind the scenes and knew what was happening behind the curtain. A lot of people don’t focus on that.”

He adds that the most important role for mentors is to understand that performance becomes exponentially better when understanding the bigger picture and overall outcomes.

Doing so allows them to go beyond the scope of the job they were hired to do. They focus on the grand scheme of things, while also prioritizing self-improvement and professional evolution. They become equipped to lead and strategize when disruption happens.

Diversity is also a key factor.

“I’m a quantitative person,” Chaturvedi said, “For every metric you look at, charts for diverse teams are up and to the right. They’re just more successful. On my team, not being inclusive is never an option.”

Holistically, WarnerMedia prioritizes leadership with specific programs in place at every level of the organization to foster growth—from the front-end to cultivating leadership at the highest levels.

Even in the four years that he has been with WarnerMedia, Chaturvedi has witnessed media grow even more disruptive with new ways to consume content, a la smart speakers, wearables and 5G. Though consumers still want WarnerMedia’s content, Chaturvedi says consumption has become even more fragmented.

Chaturvedi and WarnerMedia are embracing such changes by putting the right people and right strategies in place.

“Disruption isn’t new,” says Chaturvedi, “It’s been around for hundreds of years. It’s a question of whether or not you choose to embrace it.”

Join Chaturvedi at Publisher Forum Scottsdale for more insights into how you can embrace the change and “build a halo around you to bring others along for the ride.”

What Got You Here Won’t Get You There: How Successful People Become Even More Successful – Marshall Goldsmith

The Innovator’s Dilemma: When New Technologies Cause Great Firms to Fail (Management of Innovation and Change) – Clayton M. Christensen