“I don’t actually love the format of books,” says Tom Goodwin, EVP and Head of Innovation at Zenith, as well as the morning keynote on Tuesday, June 5 for Ops 2018 in NYC. “As someone who writes about current affairs, it’s frustrating that a book takes so long to write and you can’t change it—it’s going to be out of date the moment it’s published. You can’t see people commenting on it, you can’t share passages easily.”

But there is a certain gravitas that comes with writing a book, he comments, and there’s a reason why we still gobble them up even though there are far more interactive and easily digestible ways to communicate ideas.

This is a central concept of Goodwin’s new book, “Digital Darwinism: Survival of the Fittest in the Age of Business Disruption”: distinguishing the mediums and industries that are ripe for change (especially via technology) from the ones that are currently solid. Sure, a lot of us prefer reading books on digital tablets now, but they’re still books at their core.

“You feel quite vulnerable when you write a book,” he adds. “You feel responsible for a lot of people’s time and you don’t want to waste it.”

And a book is a fitting format for “Digital Darwinism,” as it aims to launch larger philosophical conversations about how technology is changing a variety of businesses from top to bottom. How does one adapt in the digital age—slowly in small increments or rapidly and dramatically? (Goodwin argues for the latter.) It’s a particular potent question in advertising, a space caught in what feels like a never-ending identity crisis.

I caught up with the Goodwin to discuss the concepts of “Digital Darwinism,” and to see how they’ll form the basis for his Ops keynote, “Entering a New Age of Advertising.” 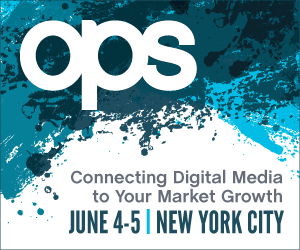 GAVIN DUNAWAY: “Digital Darwinism” has a lot of big concepts, but would you mind giving all of us ad tech people with short attention spans the “elevator pitch”?

TOM GOODWIN: In the landscape right now, there are two groups of people: those that deny change exists, are hoping to hang on as long as they can, and making as little changes as possible to prepare their businesses for the future. Then there are people in the opposite camp, waving their hands around and screaming, “Everything is different now! Brands are dead; TV is dead; computers are taking our jobs!”

What’s interesting about change is that when something new comes into our lives, we’re more keen to give it a label rather than understand what it means—what it is and isn’t. There’s not an agreed-upon definition of artificial intelligence. The “Internet of things” is a broad, philosophical notion about connectivity—it’s not specific.

In digital media, programmatic just means using computers and algorithms to make decisions. Somehow in the world of advertising, we’ve conflated that with remnant inventory and murky traffic. We end up using words like programmatic incorrectly—it’s just a smart way to buy and sell media. We often do ourselves a disservice by using words that don’t mean much.

GD: You comment in the preface for “Digital Darwinism” that your passion for writing the book is borne out of frustration—frustration with something in particular or something more general?

TG: Before writing a book, I saw myself as someone who could work in large agencies and provide meaningful advice to clients and businesses—hoping they would become more optimistic about technology and try new things.

Frankly, I’ve become quite frustrated with how big companies operate. It struck me that it would be easier to get permission to have these more profound conversations if I had written a book. This book is meant to get people thinking, help them become more open to the conversations they should be having.

What’s interesting about change is that when something new comes into our lives, we’re more keen to give it a label rather than understand what it means.

I don’t think people actually want to change—I think people want to give the illusion of changing. A particular frustration of mine comes from the distractions we put on to give people the impression we’re doing something proper, when in fact we aren’t really changing that much. If you’re a retailer, you should be rethinking your whole supply chain or how your website operates. Instead you stick an iPad in a store in San Jose and hope for the best.

The changes businesses should be making will take a while and cost a lot of money, but they’re essential. Instead they do gestures that are quick, cheap, and don’t change anything at all.

GD: The scope of your book is vast and impressive—and I suggest everyone read the whole thing—but which part do you think will resonate most with the digital media and advertising community? (Especially as they bite their nails in anticipation for your June 5 Ops keynote, “Entering a New Age of Advertising.”)

TG: The notion that the foundations that we are building on are the foundations of the past; we try to create the future on the old foundations rather than re-thinking the foundations. Digital media companies are putting on “newfronts” instead of upfronts—the upfront is a stupid, archaic thing, so it’s strange that a newer company seeks to replicate the mistakes of the past. Campaign success is based on rather old-fashioned measurement units.

Rishad Tobaccowala [Chief Growth Officer at Publicis Groupe] talks about the future not fitting in the containers of the past—we’re extremely guilty of this in advertising. We should probably draw a line under everything in agency structure—how we’re organized as agencies, how we assign money, how we create strategy, how we measure success—and rethink it all from the beginning. Instead we apply various techniques to just about make it work, and that’s why you end up with brands having 2,000 agencies around the world, or “voice agencies of record,” etc.

Using my analogy from the first page of the book, if today you were to create a structure for how advertising would work, you would come up with anything remotely like what we currently have. The industry needs to get bold enough to rethink itself.