I have just emerged from my sensory deprivation chamber following AdMonsters’ June 10 OPS conference – the stimulation of more than 500 industry players roaming four floors devoted to native advertising, multiscreen and technology was too much to digest. Just before I went into shock, Content Czar Rob Beeler guided me to AdMonsters’ secret lair underneath the UN Building, where he locked me into the chamber with orders to process all I could from that hectic day.

In the damp, dark silence, I was able to refine my seemingly infinite learnings into a compact form – six major takeaways. I was almost able to embrace the listicle format I’ve been studying on ClickHole, but alas, my legacy journalist habits still plague me to write in paragraph format. One day I’ll catch up with new media style, one day…

1. Creative production was a big issue from the get-go, and it’s clear that publishers are stepping up in providing services when it comes to display, video and native. Morning keynote Julie Hansen, President of Business Insider, said her company is happy to convert client flash ads into HTML5, time and effort no longer a concern. Conde Nast is working with vendors that can generate varied creative optimized for devices based on assets delivered by the agency.

When I asked who was gaining ground on the neverending turf war between creative and media agencies, MEC Global’s Shenan Reed said that while media agencies won’t take over creative functions, they need internal creative resources. In the “Future of the Trading Desk” session, Varick’s Jim Caruso echoed this by mentioning the addition of creative capabilities to facilitate scale buying.

All of this supported my previous argument that creative technology is a burgeoning space – I’m already seeing a lot of companies push solutions such as “programmatic creative.” In fact, Rubicon presentation on its “mobile native exchange” showed such capabilities built in. However, I’m left with the question of whether scaling creative production through technology is enough – mainly to drive consumer engagement.

2. I ended off my keynote session with MEC’s Reed and Hearst SVP Lincoln Millstein by asking the digital pioneers about their biggest disappointment over the evolution of the digital advertising space. Reed lamented that instead of using technology to push creative innovation, we’re still obsessed with employing it to chip away at the margins. Millstein wondered if the ad industry would ever get serious about combatting fraud to add legitimacy to the space.

Those two are interrelated. The continuous hacking at the margins brought client spend to the open RTB-powered exchanges – while this transactional automation offered many positives, it’s the cookie-hunting at the lowest price that helped drive the rampant bot-driven fraud of today. Many players have no incentive to do anything about the fraud (i.e., fraud prevention might actually cost them revenue), so there’s been a silent agreement to look the other way. What will change that? Millstein suggested a major, major advertiser giving up on digital could be the first domino to fall.

Is that the GroupM announcement that it’s evacuating the open exchanges for the comfort of private ones? Doubtful, since the agency is not actually quitting the open exchanges. My guess would be further adoption of programmatic direct services and a sharp increase in automated guaranteed transactions will eventually drive a cleansing of the exchanges – and possibly a new age of transparency, something Tech Keynote Jim Spanfeller focused on.

3. Would you believe we had not just one, but two viewability sessions? And they were both packed. I moderated the evening panel with Conde Nast’s Dennis Colon, UM’s Chandon Jones and AdSupply’s Will Hodges. While 100% viewability is a pipe dream, 95% is a reasonable goal, and one that will likely be a reality in the near future. Just a few months after MRC lifted the advisory, both Conde and UM were seeing an average benchmark of 70%, which seems damn impressive to me. (Check out our Publisher Viewability Litmus Test for more findings.)

I tried to focus the panel on the upside of viewability, or the pleasant side effects: for example, Colon mentioned that because viewability touched on multiple departments (including editorial), organizational culture changed with ops’ profile ascending. The effort spurred redesigns as well as innovation and experimentation with “sticky” ads and “smart” loading (the rebrand for “lazy loading”). Indeed, AdSupply was not on the panel because it is a viewability provider, but because it offers agencies and publishers ads with high viewability and engagement. I’m seeing more third-party companies jump on this opportunity. Apparently AdSupply is already working on cost-per-engagement sales models, which may be a sign of things to come… 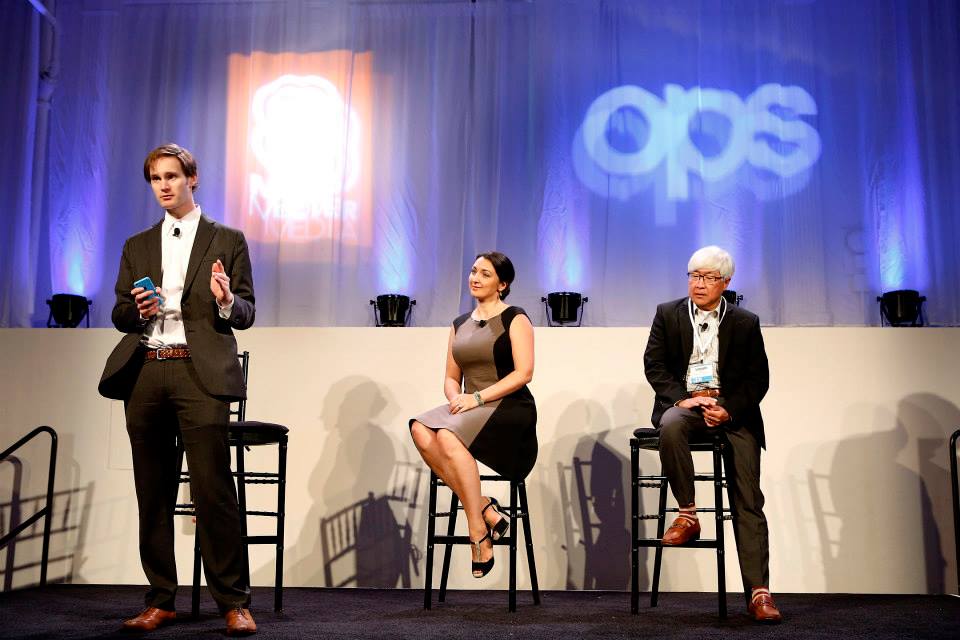 4. I was mainly running between the second floor (Screens) and the fourth (Tech), so I had to rely on what I overheard coming down from the fifth floor (Native). Panels on native content production and measurement were packed and lively, our CEO Bowen Dwelle told me, as was the Washington Post’s presentation on launching its BrandConnect product and overcoming back-end issues by bridging the ad server and the content management system.

Also a hit: native advertising benchmarks from our sponsor Polar, which I strongly suggest you dive into – there’s a lot there, from general stats to content creation and distribution/trafficking. Just a taste: 40% of publishers surveyed expected native to make up a quarter or more of their 2014 digital revenue; the other 60% expected less than 10%. And half of publishers are in the driver’s seat when it comes to content creation, with only 14% taking sponsored content directly from the client.

5. I can’t thank the MediaVest guys – Oleg Korenfeld and Steven Traykovski – enough for offering attendees an inside look into how the agency is making the most of its groundbreaking partnership with offline data giant Acxiom. At the most basic, Acxiom’s Audience Operating System is just another data source, but a far more extensive one than cookie-based third-party data providers. Clients can blend Acxiom data with their own CRM data to fill in knowledge gaps, and MediaVest can build segments based on “True Unique” IDs that can be targeted across channels. Um, are there privacy concerns in targeting actual people? Oh yeah, and MediaVest is still trying to navigate the issues.

6. As a proud cord-cutter, OTT advertising is a favorite subject of mine, so it was great to chat with Roku’s Scott Rosenberg as well as SnagFilms Michael Kohn and OMD’s Jeff Minsky. Yes, it’s very early days for OTT, meaning many monetization paths and a lot of experimentation. Custom engagement initiatives – such as what could be called a Lego skin – seem very popular with both advertisers and consumers. In addition, branded content like special events through custom channels have proven to be winners to.

Straight video advertising relying on dynamic ad insertion is still up and coming, particularly slowed down by a dearth of metrics and measurement difficulties (no panel-based system for OTT yet). However, as consumer use of OTT platforms grows and technology improves targeting options, I’m curious about the potential for OTT advertising exchanges – talk about addressable television!

I could tell you so much more about the day, but I’m worried that you might need a trip to the AdMonsters sensory deprivation chamber as well – it’s currently occupied by Rob, who is having a hard time dealing with that 95th minute goal by Portugal against the US. Instead, why don’t you join another conversation? Take a look at our upcoming meetups in New York and San Francisco, as well as the agenda for the Publisher Forum in Columbia Gorge outside Portland in August. You could wait another year for the next OPS, but why torture yourself?