I can’t imagine a lot of publishers crying at the funeral for VPAID (Video Player Ad-Serving Interface Definition), the IAB video standard meant to streamline the use of interactive elements in digital video that was hacked for a host of functions—some benign, others less so.

With the arrival of IAB Tech Lab’s Secure Interactive Media Interface Definition (SIMID)—in public comment until May 24, 2019—VPAID will hopefully soon be laid to rest. SIMID is a replacement for VPAID’s original intention—enabling interactive elements in video creative. Its cousin OMID (Open Measurement Interface Definition) will oversee measurement functions like verification and viewability, which had been awkwardly foisted on VPAID.

And say goodbye to those nasty nested auctions and the VPAID errors left in their wake—SIMID supports server-side ad insertion (SSAI) and cannot be jockeyed into performing client-side auctions.

SIMID is the last piece of a great re-imagining of digital video standards that not only aims to stop the hijinks of VPAID, but also offers a more secure solution for advertisers and publishers as connected TV ramps up toward a meteoric rise.

Adoption is the big question. Though VAST 4 has been live for a few years now—and is truly the optimal video standard for all digital video environments—creative in VAST 2.0 is still pervasive. However, this trinity—VAST 4, OMID, and SIMID—as well as the dwindling share of premium desktop video may be enough to force advertisers, tech providers, and publishers to get their video ad programs up to standard.

From day 1, VPAID has been problematic—and that probably can be blamed on its design. As a publisher explained, VPAID is pretty much a video player itself. When a pub sends out an ad call and receives advertiser creative, the publisher video player basically steps aside and lets the VPAID do its thing.

That thing is a complete mystery to the video player. Some VPAIDs launch auctions, only to grab a VAST/VPAID that starts another auction, and another auction, and on and on. The latency issues add up quick, while publishers can easily find themselves victims of a VPAID error and end up with no creative at all. Or, thanks to the use of a wrapper, a publisher could end up with a horrid piece of creative or malvertising—and no idea where it came from.

Another typical problem with VPAID is that creative won’t give back control to the pub player when it was finished, breaking the video experience.

“I have seen so many poorly written VPAIDs,” one publisher laments. It’s a format easy to screw up, and the ludicrous pace of video creative production doesn’t leave a lot of room for quality control.

SIMID is sandboxed into a cross-origin iframe, offering a layer of separation between the pub player and creative as well as prohibiting access outside the iframe. (No wrappers allowed!) Rather than a separate player or XML schema, SIMID should be viewed as an asset within the VAST schema—as the GitHub explains, a URL to an HTML resource originating in the advertiser’s domain. 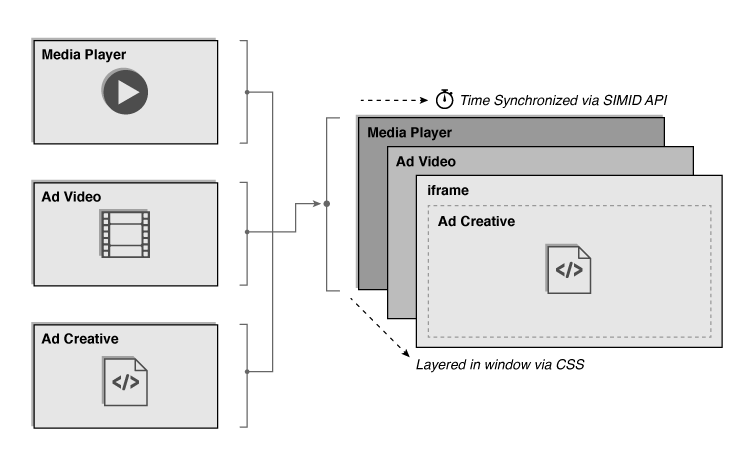 In effect, the publisher video player retains control during the ad. Rather than another video player loading, the pub video player operates the creative package. In addition, a SIMID error will have no effect on the player, and the standard offers the ability to fall back to non-interactive creative.

With playback back in the video player’s hands, an actual video media file (e.g., an mp4) is required alongside the VAST response, explains Amit Shetty, Senior Director, Video and Audio Products for IAB Tech Lab. If a player does not detect a media file, the creative won’t be “played” or left to do anything.

The other major change from VPAID is the splitting of the interactive code node from the viewability/verification one—SIMID and OMID, respectively.

“[W]hen we started working on the next generation of VPAID, we got stuck in a back and forth of how to support verification while also supporting interactivity,” Shetty says. “That is the reason why we focused on first getting the verification replacement of VPAID—OMID—allowing SIMID to be free of the constraints around access since we could now point to OMID for those use cases.”

Good UX Is Good for Business

Playback control back in the hands of publishers has been met with some grumblings from buy-side folks. The fears are that SIMID can be gamed—disreputable publishers will pull tricks like enabling multiple creatives to play at the same time (some hidden) or manipulating playback measurement. These concerns follow buyers grousing about Open Measurement being an SDK compared to VPAID’s advertiser-controlled code.

To some extent, they’re going to have to get over their qualms if they want some of the hottest video inventory on the market—and want measurement alongside interactive capabilities.

Since VPAID doesn’t function within mobile-app and connected-TV environments, it’s mainly only available for desktop video. Even then, the majority of desktop video views will go to YouTube, which has never allowed VPAID. As a publisher source notes, you haven’t seen halt advertisers from leveraging the channel—the scale and targeting are too alluring to ignore. Many premium video publishers have taken YouTube’s lead and banned VPAID as well.

What advertisers and buy-side folk are really reacting to is the overarching move to SSAI as the standard for video delivery, particularly as connected-TV inventory grows. Publisher commitment to high-quality user experience on the big screen is (rightfully, IMO) trumping advertisers’ desire for control—particularly over measurement tools.

SIMID and OMID are rather ingenious ways to placate these concerns while offering advertisers similar (perhaps better) capabilities than before. Open Measurement, for example, has been embraced by all the major measurement companies and is a far more efficient way of gathering verification and viewability data.

In addition, because these standards are more secure and less likely to blow up a publisher’s video experience, Shetty notes that premium publishers will be more likely to adopt them, greatly increasing the amount of verifiable inventory available that supports interactivity.

The great potential and efficient operations of SIMID and OMID will hopefully convince publishers, advertisers, and tech providers alike that it’s in their best interest—for monetizing and reaching audiences—to update to VAST 4.

The connected-TV age is officially here, and we’re past due for widespread adoption of video ad standards that truly support it. Flawed to begin with, VPAID has finally outlived its usefulness. And the digital media world is better off for its passing.