Can premium publishers wean themselves off their Facebook traffic habit? Sure—we’ve seen it happen, but it’s often not easy. I recently asked Claudia Page, Dailymotion’s VP of Product and Partner Development and a speaking alum of Ops, how publishers and other media companies can dwindle their dependence on the Duopoly, and how best to work with such platforms in the future.

Her own experience at Dailymotion suggests there’s a hopeful future for pubs where Facebook (or a platform like it) plays a role, but not a life-or-death role for their business. Since Claudia and I started this conversation, Facebook has come increasingly under fire for its use (or misuse) of its users’ data, and it’s put the brakes on a number of products that had been aimed at serving its publisher and app partners. Claudia weighs in on those developments now—and to catch up on what we’ve already discussed, check out Part 1 of this conversation.

I want to get back to what Campbell Brown from Facebook’s news partnership team said at Recode in February. She suggested Facebook is “having a point of view and leaning into quality news.” Do you think this means Facebook will try to become an arbiter of “quality” content? Does it have to? Who fares well under this circumstance? 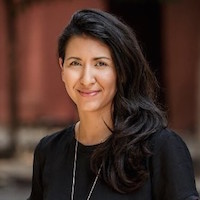 CLAUDIA PAGE: I don’t think Facebook has a choice in the matter. Two-thirds of Americans say they get at least some of their news from Facebook. Our friends and family are going to continue to share information with us because it’s inherent in our social construct, and publishers want to be part of that conversation. Even though this behavior might not have been the reason Facebook was founded, network effects have scaled the flow of information, which means that Facebook should establish guardrails to mitigate the flow of false or malicious information.

The keys to authority and what is deemed “quality” content will ultimately come down to trustworthiness. Ensuring that the content we’re exposed to in these places is trustworthy will involve a blend of tactics, including algorithmic moderation, human moderation, and even user moderation. Facebook, for example, just shared that they will soon be allowing its users to score the trustworthiness of content they encounter in the feed.

There’s a lot of work to do still, and the solution may be a combination of new policies and factors. There’s no panacea to the notion of “content control.” At Dailymotion, for example, we use a combination of digital tools and algorithms to determine quality content, in addition to editorial supervision.

If they’re affected by the algo switch, where do you think publishers will most likely look to replace referral traffic? Could other social platforms pick up the slack?

It goes back to focusing on building an engaged and loyal audience versus trying to attain certain traffic milestones. Publishers need to understand the importance of building a strong consumer brand that people trust, versus simply enticing people to click based on a hyperbolic headline or snappy short video. I think we’ll see more major partnerships with the likes of Apple News, for example, which puts content directly in front of relevant consumers. There are also still gains to be made with a strategic SEO strategy. Ultimately, the conversation is moving toward quality and engagement.

If you think about leading platforms, there’s a common thread, in that each has a well-defined unit of content that the user experience coalesces around. Facebook was veering away from that vision.

Facebook recently killed an experimental news tab feature, and it’s been pausing the projected launch of a number of other new and experimental features. I thought the news tab would be a positive solution for users and publishers. Why do you think Facebook gave up on the project? Do you think it was a wise move?

If you think about leading platforms, there’s a common thread, in that each has a well-defined unit of content that the user experience coalesces around. For Facebook, it’s the status update within Newsfeed that connects people to friends and family. For Twitter, it’s broadcasting real-time updates. For Snapchat, it’s ephemeral images and video. At Dailymotion, we’ve created a video-first platform that relies on trusted publishers and human curation to surface the best content daily.

Facebook’s nature is to be experimental and to constantly learn from those experiments. In a dedicated Explore tab, it was veering away from that vision, and the users responded accordingly. People don’t want to separate feeds within the Facebook experience, and Adam Mosseri was very transparent about that when he announced the news tab test would not be moving forward. Platforms like Facebook, and Dailymotion too, face big challenges when it comes to appeasing and, ultimately, providing value to their communities.

At Dailymotion, we spent the better part of last year completely overhauling our user experience. In that process, we had to constantly test and optimize, paying close attention to how changes big and small would impact users, publishers, and brand partners. Platforms must work toward creating a harmonious environment in which all three stakeholders flourish, but as we’ve seen at Facebook and other platforms, this can be incredibly difficult to do, because the preferences of each group tend to be at odds with one another.