The other day I published an interview with Kind Ads adviser Neil Patel on the workings of a decentralized ad network leveraging a blockchain. When I tried to boost my Facebook post of the story, the platform denied me, stating that it does not run ads related to cryptocurrencies. I pleaded my case that the story was not pushing cryptocurrencies but discussing blockchain-enabled ad transactions, but Facebook ultimately refused to boost the story. (I know—sounds weird that Facebook would actually refuse money from a publisher.)

As much as you may think talk about blockchain is anywhere and everywhere, the above is another confounding example of the lack of understanding that circles the technology… And why we need to keep discussing its opportunities and ramifications, because they honestly go on endlessly. (At Ops June 5 in NYC, we’ll have three blockchain-based companies discussing their very varied approaches to media solutions.) And if you want to join a robust conversation about a nascent or burgeoning technology, you should probably look to one started by Drew Ianni, Founder and Chair of Chief Digital Officer (CDX) Forums.

Ianni and team have assembled a diverse agenda for the CDX Academy Blockchain Brand Innovation Summit on May 11 in NYC (AdMonsters readers can use the code AM25 for 25% off the ticket price), including dives into media supply chain management, regulatory issues, consumer data sovereignty, digital rights management, and more. I caught up with Ianni to get his thoughts on the biggest misconceptions about blockchain, what potential applications excite him, and much more. 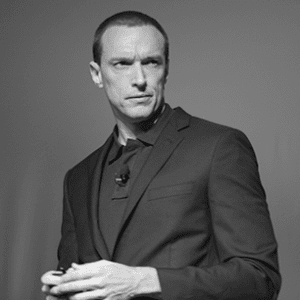 You’ve got quite the speaker line-up for this event: characters from Comcast, Johnson & Johnson, GE, 4A’s, OMD, Viacom, and more. Everyone is getting into the blockchain discussion. What led to the creation of this event?

I’ve been thinking about this type of event for the better part of a year. I’ve had countless conversations about the topic with leading executives from just about major media, publisher, and ad tech company.

Given the crescendo of interest and new products and companies coming to market, it’s the right time and opportunity to focus on blockchain (not just bitcoin and speculative digital currencies), and hear from real world global brands on their plans to use the technology, where the opportunities are, and where the challenges remain for adoption. We want this event and its content and speakers, to really cut through the noise and hype and explore real world examples, case studies and proof of concepts.

Who is this topic resonating the most with?

For starters, the advertiser industry is actively investigating if blockchain will impact the business of advertising, the advertising supply chain, and if it ultimately will have impact on brand transparency and trust. Larger corporations and enterprises are also wondering if blockchain has the potential to improve business operations and efficiencies, plus have a positive impact on customer experience.

The Blockchain Brand Innovation Summit will tackles the topic on multiple levels. There’s content for people who are new to blockchain and are looking for education, like what you can find with the CDX Forum breakfast bootcamp series. We also have content and speakers who who are rather advanced on the topic to help brands, agencies, and vendors who service these companies, to get a deep-dive into real world concepts and proof of concept.

The executives we’re seeing showing the most interest are, naturally, chief digital officers, but also CMOs; ad ops and programmatic; data and analytics; media and entertainment media; and business and product development. The show has something for everyone.

What do you think is the biggest misconception out there about blockchain in marketing? How will the summit address that?

Based on my conversations, the biggest misconception is the link to bitcoin and other speculative digital currencies—that they have to be intertwined with blockchain, or are the same thing. It’s also helping people get over their fear of the perceived complexity of blockchain.

The biggest skepticism I hear from the ad and marketing industry is around scalability. This is important in terms of the advertising media supply chain and how fast blockchain can be applied to real time bidding, for example. People are also skeptical of its impact on the broader digital ad business.

The biggest misconception is the link to bitcoin and other speculative digital currencies—that they have to be intertwined with blockchain, or are the same thing. It’s also helping people get over their fear of the perceived complexity of blockchain.

There is also healthy concern around Facebook and Google having no (at least publicly announced) interest in opening up their supply chain. If the companies that command 60%-70% of media spend aren’t on board, is it enough? If the duopoly doesn’t embrace blockchain and the technology isn’t fast or scalable enough for programmatic, what’s left? Is there a Moore’s law for blockchain and it’s transaction speed? These are some of the questions we’ll be diving into.

If a publisher or an advertisers says to you, “Hey, I want in on this blockchain biz! Where do I start?”, in what direction would you point them?

Obviously attending CDX summit is a great start! There are a lot of solid resources out there. It depends if someone is wanting pure education on blockchain as a technology or if they want to get into the weeds to see about product development and integration at their own company.

There are a range of community-organized meet-ups about or online forums to join, many with emerging vertical focus. Reddit forums and joining Telegram groups are an ideal place to jump in and see the conversations going on. Also look at industry alliances—such as IAB Working Group or AdLedger. There are also a number of podcasts and Medium accounts from people in the blockchain/crypto space to follow.

This is pretty nascent technology, rapidly developing. What potential blockchain application—something on the horizon—excites you the most?

Good question. This year is going to see a lot of projects start to roll out to the market. I’m especially curious about private versus open blockchains. I see a lot of potential opportunities happening with private permission-based blockchains with limited partners and companies, say to run a specific campaign. If the efficiencies and benefits are there, and early testing appears so, then these private-based blockchains will thrive. Public open blockchain are also exciting, but harder and more challenging to scale—let alone get a mass of people or companies or people to use, especially when involving tokens or coins with transactions.

Join Drew Ianni and Gavin at CDX Academy Blockchain Brand Innovation Summit on Friday, May 11th at Columbia University. Use code AM25 for 25% off the ticket price.

For more information on the event, feel free to reach out to Ianni at drew@cdxforum.com