Everywhere you look these days, someone has a crazy new solution built off of blockchain technology—“This new dog-walking service is all blockchain based! It tokenizes scooped-up poop!”

As with tech frenzies of the past, there’s not enough people stopping to ask, “Why would you build that using blockchain?” Well, when it comes to decentralized ad network Kind Ads, the answer is straight and simple: to get rid of middlemen, or the infamous “ad-tech taxmen.”

We caught up with Kind Ads advisor Neil Patel—cofounder of well-known brands Crazy Egg and KISSmetrics—to find out the thinking behind a decentralized ad network, as well as just how it works. In addition, he shared his thoughts on the future of the banner and whether the infamous Duopoly can be cut down to size.

WITH THE SUPPORT OF Kind Ads
Kind Ads is an advertising platform that serves user-friendly ads without taking any middleman fees.

BRIAN LaRUE: How do you know the Kind Ads guys?

NEIL PATEL: [Kind Ads cofounders] Saulo Mederios and Rafael Mayrink have an ad agency, and we’ve worked on projects together. They complained about paying so much in middleman fees to Google and Facebook for their clients’ spend.

So we started doing analysis on our best marketing campaigns, and we all found the same thing: The best-converting channels weren’t banner ads. They tended to be where people already were thought-committed. For example, once someone’s opted into your email list and you do an email blast, it converts much better than a native advertisement. 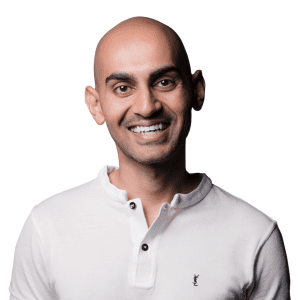 We created an ad platform for all these other channels that Google and Facebook aren’t focusing on. Those channels are also not as irritating, and there’s no easy place you can go out and get them.

BL: KindAds has referred to itself as a “decentralized ad network,” which to me sounds like blockchain language. Is it blockchain-based?

NP: It is blockchain-based, based off the Ethereum network, an ERC-20 token. The transactions can happen without a middleman. You can go directly from advertiser to publisher; the publisher gets their money and the advertiser can start running ads instantly; and there are no middleman fees.

Best of all, middlemen don’t store the data. We’re very cautious about privacy. Publishers should be able to control their own data, and advertisers should go directly to them to advertise. I think sharing data all over the web is a really bad habit. And with GDPR, privacy is going to get stricter. It’s going to be better for end users, but harder for companies.

BL: AdMonsters just published an article by Gabe Greenberg where he said that from his vantage point as an advisor, there are no scalable applications for blockchain in the ad ecosystem right now. Do you agree or disagree?

Blockchain technology is much more scalable than it was two years ago. Facebook and Google would not be looking at blockchain if they didn’t believe it can be scalable.

NP: There are scalable solutions. Blockchain technology is not as efficient as it could be, but it’s getting better and better. And you don’t run into issues unless you’re processing billions of dollars. You can process millions every day, because a million dollars could be 100 or 200 campaigns. The problem isn’t volume of dollars, but the number of transactions the network can handle. And advertising tends not to have small transactions.

In the future, assuming you want to take on Google and Facebook, you may run into scalability issues. But that’s getting solved. Blockchain technology is much more scalable than it was two years ago. Facebook and Google would not be looking at blockchain if they didn’t believe it can be scalable. There are all these coins and technologies today coming out to solve scale. You see the Ethereum founder focusing on making it more scalable, stopping his work on everything else.

BL: Kind Ads says they’re going to incentivize all stakeholders to improve on their platform. What is the incentive and what are the improvements?

NP: It should be that if you want to participate and share your data so advertisers can target better, you can opt in, share your data, and be rewarded with Kind tokens over time for your participation. If you don’t, then so be it—but you won’t be compensated.

BL: When it comes to ad tech, how is Kind Ads approaching an oversaturated market?

NP: One differentiator is technological—non-obtrusive ads. If an email promotion is related to the list you opted into, you’re seeing something relevant and beneficial to you. And that converts way better than native ads—yet there’s no Google AdWords or Facebook Ads for email and push.

BL: If Kind Ads isn’t aiming to kill Facebook or Google, which would probably be impossible, what is the play?

NP: We’re not going to crush them, even if we raised a billion dollars from the crypto community. You need to be really smart and strategic.

It’s too hard to tell people, “Stop using Google and Facebook—even though it’s making you millions of dollars— and come over to Kind.” It’s easier to say, “Here’s a channel you’re not leveraging! Test them out, you can make some extra money. Oh, it’s working! How about you expand your campaigns?”

It’s too hard to tell people, 'Stop using Google and Facebook—even though it’s making you millions of dollars— and come over to Kind.' It’s easier to say, 'Here’s a channel you’re not leveraging! Test them out, you can make some extra money.'

When Facebook came out, everyone said it was going to crush Google Ads. It didn’t! If an advertiser spends $100 on Google ads and it makes them $200, and they spend $100 on Facebook and that also makes them $200, why would they stop doing either?

So our model is, find channels they’re not leveraging—email and push. We show it’s more profitable for both advertisers and publishers, then we get into native and start taking away some of Google and Facebook’s market cap.

I often hear publishers say, “I’m working with Google and Facebook, they’re taking my data, and I’m barely making any money off it.” And advertisers say, “I keep advertising, and every year we see ad costs go up.” Google’s revenue is coming mainly from ads, not devices. Advertisers and publishers will eventually get fed up, cut out the middlemen and make quite a bit more money.

BL: Kind Ads doesn’t sound enthusiastic about the role of banners in the future. Where do you see formats going, and how do we get past the banner era?

NP: You’re not going to get past the banner era anytime soon. You’re going to see them convert less and less, and advertisers are just spending less on banners as a result.

We’re already seeing a transition toward more relevant ads. Video ads on Facebook tend to convert 5 to 10 times more than banner ads or right-rail ads. That’s why Facebook is encouraging video ads with subtitles, so they’re understood even if you don’t have your speakers on.

Second, you’re going to see things going more toward influencers. This is where Kind Ads is going, too. If you’re reading a nutrition website because you’re enthusiastic about being healthy and you subscribe to their email list, the founder of the blog emails you about this new product he’s used, and you see what happened over 30 days of him using it, that’s highly relevant to you, and it’s not irritating. This guy won’t advertise the product to his community if it gets bad results.