Below is the video of Rob Beeler interviewing Jack at OPS along with the transcript of the second part of the interview. The rest of the transcript will be made available over the coming weeks in a five part series.

View the first part of the interview transcript.

Jack: Well, the word transparency is a word that made its way into almost every presentation. And that’s an interesting word, and it’s a dangerous word, because transparency is something that the industry does not necessarily embrace. It sounds like you want transparency, but if you talk to the heads of most media agencies today, they will tell you that transparency is not necessarily a healthy business model for them. They like the idea of arbitrage. They like the idea of being able to buy low and sell high. They’re an extremely low-margin business, and what the technology is doing, especially on the digital side—and what’s happening in the online business is beginning to feed into the television business, the radio business, the newspaper and magazine business, the {at home} business. The idea of their, the margins thinning, and when you look at the growth of demand side platform, a lot of that is to have the arbitrage opportunity. In Europe, it’s embraced, the idea that a media buying organization doesn’t need to be transparent.

The relationship between the agency and the media seller is blind to the client. In the United States, the tradition is that it is transparent, and a lot of the agencies are trying to flip that and move to more of a European model. So I think while transparency in terms of audit and what double-verify does and other types of things, while we need to have that kinds of transparency, I think it’s dangerous to position the industry as being a highly transparent industry without understanding.

Rob: Right, and I think it’s interesting because again you hear that kind of call for transparency, typically from the buy side. Like, “please, publishers, be more transparent in how things work and yet…

Jack: They don’t want the transparency…

Rob: …transparency the other way…

Jack: …the other clients. It’s inevitable we’re going to see some of the big multidivisional/global marketers developing their own buying platforms. It’s not out of the question that General Motors, which has the dedicated media unit within Starcom, or Ford, Ford Motor Media, Unilever, Proctor & Gamble, to say you know what, we’re going to start internalizing this ourselves. It’s such an early stage in the operational part of the business, and it’s so complex, that I think there are some- a lot of roadblocks and pitfalls that we might not necessarily see.

Rob: And that seems like a role operations can play—is, that word transparency—and maybe that’s the- halt, let’s stop this meeting before we go any further and make sure we know…

Jack: Let’s define it; let’s be clear about what you mean.

Rob: …and when people approach you with that, what does that actually mean? And so forth…

Jack: And to whose benefit? Is it, and look at, I think the word that’s not spoken a lot is arbitrage, and I think more and more we’re going to move toward an arbitrage model and that the platforms have to be designed to allow for arbitrage. You know, buying low, selling high.

Rob: Right. Well, speaking of that, the online advertising space is so complex—over complex, quite honestly, in my opinion, but you’ve had exposure to other media in newspaper and television and so forth. Are we too complex? Have we overcomplicated it, and what could we learn…

Jack: Two different questions… Have you overcomplicated, or are you too complex?

Jack: Yes, it’s much too complex. Yesterday I spent some time with Dave Morgan who found Tacoda and now has a new business, Simulmedia, and Simulmedia is operating in and working with cable television and broadcast television inventory as opposed to online inventory. And he’s stunned by the simplicity of the television business. There are no contracts or phone calls. It’s e-mail, it’s handshakes, it’s an incredibly simple model, and comparing it to the complexity in online transactions is a real issue. And it’s also an opportunity for online, but it’s one of the reasons that the traditional media sustained their disproportionate percentage of revenues. And by the way, when you look at that chart that shows online usage here {hands wide} and spending here {hands closer together}, that’s been true across all new media. Cable television is still dealing with that disparity of viewing to ad revenue. So, the broadcast networks continue to be, to receive a disproportionate amount of money because of the simplicity of buying as well as the scale.

Rob: And you mentioned there’s kind of an opportunity there, whether you’re talking with people about trying to…

Jack: You’ve never done this before? That was a good follow-up.

Rob: Working on it.

Jack: I kind of look at it like the online industry, especially as we’re moving toward an apps model… (the interview will be continued in Part 3 of our 5 part series) 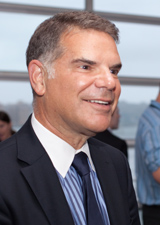 We continue the conversation with Jack Myers, media economist and chairman of the Media Advisory Group and Rob Beeler at the OPS NY event. During the wrap up session they discussed media, transparency, apps, paywalls and of course, why ops is sexy. This blog is the second in a five part series. Watch the video and read the second part of the transcript of the presentation.