Below is the video of Rob Beeler interviewing Jack at OPS along with the transcript of the first part of the interview. The rest of the transcript will be made available over the coming weeks in a five part series.

For more on Jack Myers, read his biography.

Rob: Thanks for making it this long. I know we made it a busy day for all of you and I’ve been looking forward to this. I got the chance to meet Jack a couple weeks ago, and we started having this conversation and the opportunity came up, and he accepted. We’re glad to have you here.

Rob: That’s what I want to start with, Jack. Let’s get to your intro in a second. Jack?

Rob: What is sexy about ops for you?

Jack: Earlier, Ed Montes said you’re all rock stars. And this was somewhat of an epiphany to me, because I would have put you more in the class of being roadies. Nothing happens without you. The show doesn’t go on without you. The rock stars under-appreciate you, although they’re willing to share their beers and the alcohol, and the good drugs maybe. But you’re really only noticed when things are f**ked up. When things go perfectly, when things go right, it’s just assumed you’re doing your job. And when things go wrong, that’s when you’re more recognized. So I think if ops is becoming more visible, becoming more apparent in the industry, then that’s where it becomes sexy. And I do think that as you look down the next three, four, five, six, ten years, that more and more sales management is going to be coming up out of ops. And more and more leaders at the ad agencies of the media buying agencies are going to be coming up out of ops. Probably the dean of the advertising—the media side of the advertising business—now is Irwin Gotlieb, who runs Group M, and Irwin really comes out of operations. Those who know Irwin know that he’s a real tech geek, and can talk—you know, when you’re talking about being able to talk both sides—he can talk technology and ops as well as anyone.

Rob: And that’s essential, specifically for agencies. For them to even justify their space.

Rob: This is actually my first time doing this interview thing. I’ve already messed it up, in fact I went right past introducing him.

Jack: I thought that’s because I need no introduction.

Rob: I was going to lead with that as well. In fact, you don’t need much of an introduction. I started to write down and try to figure out the piece to even go toward. Jack, you’ve invested in companies, start-ups. You’ve advised over 250 media companies in terms of strategy. You’ve written three books, have an Academy Award nomination, an Emmy, a Peabody. What am I leaving out? When you describe what you do…

Jack: I describe myself, interestingly, as an economist—a media economist. I’m the kid who in high school, I remember, almost in tears, saying, “Why do I have to do my math homework? I will never use math in my whole life. I hate math.” Which I did, and still do, in a lot of ways. And somehow, I managed to become an economist. It really evolved to that after the fact, because what I’ve been doing my whole career…. By the way, I started out—I worked seven years at CBS television, four years at ABC radio. I worked at the out-of-home division, I worked a little bit in print.

When I started my own business, it was really to look at all facets of the media business—from the buying side, the selling side, the production side—to really understand the flow of money and the cost, the revenue side and the cost side. And that’s how I actually went and spent some time in Hollywood and produced a number of network television programs. Got nominated for a documentary called Hand Aaron: Chasing the Dream, which went theatrical. Any Hand Aaron fans here? {audience member whistles} Great. Thank you.

So, an economist is someone who studies the production, distribution, and consumption of goods and services. When I was I was trying to figure out to describe myself—you talk about the difficulty of describing yourself—my family could never quite figure out what it was that I did. And when you sell time and space, that’s also hard. A media economist also studies the production, distribution, and consumption of media. And that’s what I consider myself to be.

Rob: So, you had a chance to sit on at least a couple of sessions and hear some of the conversations. Any thoughts, or anything that struck you that perhaps coming into this you may not have thought of before?

Jack: Well, the word transparency is a word that made its way into almost every presentation…  (the interview will be continued in Part 2 of our 5 part series). 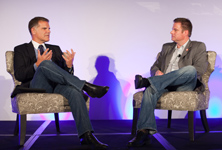 Jack Myers and Rob Beeler wrapped up the OPS NY event by discussing media, transparency, apps, paywalls and of course, why ops is sexy. This blog is the first in a five part series. Watch the video and read the transcript of the presentation.