The latest eMarketer estimates on US digital advertising are out and, yeah, there’s some stuff to grimace about. The infamous duopoly is expected to rake in more than 50% of US display spend (desktop and mobile) in 2017.

According to eMarketer, Facebook will grab 39.1% of the display market in 2017, or $16.33 billion of an estimated $41.74 billion (all net). That’s a 32% jump from the $12.37 billion Zuck and crew nabbed last year. (We should note eMarketer’s take on display includes video delivered to any Internet-connected device, though I wonder if some video served to connected TVs is not wrapped under the linear banner.)

In respect, Google looks almost modest at $5.24 billion in display revenue, or 12.5% of the total. Interesting enough, that’s only 8.4% more than 2016, which means Google’s growth curve in this channel is on the decline.

Never you Alphabet investors fear though: Google will account for 40.7% of total US digital ad revenues in 2017 ($83 billion), with the majority coming from search where they still control 78% of the market ($28.55 billion).

However, let’s focus on display: I have little doubt that the duopoly will reign supreme this year, but I question their dominance in the near future. eMarketer suggests Facebook will reel in 43.7% of the display dollars in 2019—$23.89 billion of a total $54.68 billion—while Google will actually slip to a 12.3% share at $6.72 billion. 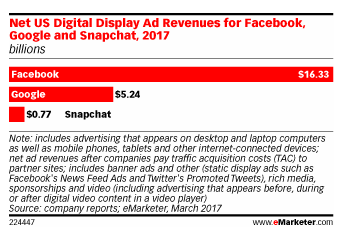 That $54.68 billion, though, is about a 25% hop in display revenue—which I’m guessing can be attributed to increased video advertising and likely higher CPMs as consolidation grants a great deal more transparency between the buy and sell sides.

It would be wonderful to see the breakdown of Facebook revenue within its own properties versus on third parties. Facebook is pretty much a ubiquitous mobile app at this point, so it’s not surprising that it’s in-app mobile revenue is going to be on the up and up. However, the network’s big scale play is the Facebook Audience Network on mobile.

As we’ve mentioned many a time, this is a black-box ad network and the lack of transparency is increasingly getting under the skin of publishers… and advertisers. Who knew buyers might actually like to know where their ads appeared alongside whom they were served to? Oh yeah, we learned this lesson in desktop…

Mix this with smarter creative—including native placements—and the space becomes much more appealing to buyers. Oh yeah, and potentially more lucrative for the sellers.

Facebook could throw a bone to buyers and sellers by sharing more data, but… This is data-covetous Facebook we’re talking about—I’ll believe it when I see it. Unfortunately, pubs are also aiding Facebook revenue efforts by publishing into Instant Articles. And guess the only way to monetize content there? FAN!

This rigidity has turned off plenty of publishers, but it’s a tough spot because publishers need exposure particularly on mobile where Facebook dominates users’ time. Pubs do get a revenue share, but they also need to get users onto their sites where they can score the real dough. No, Facebook does not make that easy, and why would they?

The best guidance around platform publishing—particularly in regards to Facebook—is to publish, but not too much. Give the users a taste, but make it clear if they desire more, they’re going to have to come to your site. It’s not the greatest setup, but it is helped by dwindling trust in the quality of links shared on Facebook.

As for Google, its display share is predicted to be stagnant or on the decline. Server-to-server through Exchange Bidding Dynamic Allocation could up its mobile web take, but as we’ve noted there are transparency issues there. As more intermediaries are sucked up in the great consolidation (or is it The Culling?), more spend will be finding its way directly from advertiser purses to publisher pockets.

So, yes, in the short-term, the duopoly is going to dominate—publishers should examine non-display revenue streams such as “content to commerce.” But there are plenty signs to suggest Google and Facebook’s display reign may be hitting its apex.

I’ll leave with this thought—when I started writing about ad tech in 2009, Yahoo (mainly through its network) was considered the dominant force in display. For 2017, eMarketer has Yahoo grabbing a 3.1% share of the display market with $1.29 billion.