Back in August of 2016, the Google Webmaster Blog announced that come Jan. 10, 2017, “pages where content is not easily accessible to a user on the transition from the mobile search results may not rank as highly.”

A little cryptic, no? Google was really taking aim at a variety of mobile interstitial units. The dominant mobile search engine is threatening to lower the mobile rankings of pages that immediately serve pop-up or standalone interstitial ads when a user clicks.

This fate also would seem to apply to large units that push content below the fold on initial page load, a format that’s grown popular across desktop websites to meet rigid viewability requirements.

Taken along with the IAB’s proposed line of new standard ads that would abandon support for mobile interstitials as well as the once highly prominent Rising Stars units, it’s clear that mobile interstitials have become unit non grata across the digital advertising ecosystem. At a recent Publisher Forum, several attendees suggested the demise of the mobile interstitial was for the best, as the unit seemed detrimental to user experience.

WITH THE SUPPORT OF SMART ADSERVER
Smart AdServer empowers you, our customers, by giving you all the tools you need to take full control of your online advertising business.

At the same time, they admitted that they would miss the tasty CPMs. As publisher mobile web traffic continues to rise and monetization efforts remain stagnant, abandoning a steady revenue driver like the mobile interstitial is a bit like losing a limb.

It’s no secret that Facebook and Google are grabbing the lion’s share of spend in mobile. Digital publishers want more of the pot, but user experience concerns, programmatic challenges and other issues are putting a heavy damper on these efforts. However, there do seem to be a few silver linings in mobile going into 2017, including smarter, less-disruptive ad units.

Platform Publishing Will Not Save Us

The constant affirmation that users spend most of their time in just a few mobile apps have led many digital publishers to refocus their efforts on the mobile web. Although according to PageFair, mobile users have not embraced ad blockers on their browsers as much as anticipated, the fear of ad-blocking Armageddon was encouraged publishers to clean up their mobile sites and discard unwieldy units.

But still mobile user experience is marred by ad-based latency. Several major players have launched offerings that load stories and ads faster, but at a cost to publishers—namely the opportunity to monetize traffic on their direct sites. Facebook Instant Articles, Google AMP (Accelerated Mobile Pages), and Apple News among others enable quick loading of content with options for advertising.

But all of them have rigid rules around monetization—limiting channels, demand partners, and available units. Our publisher sources have reported ongoing hangups in setting up ad serving, targeting troubles and a lack of data reporting on users.

The platform publishing companies are introducing additional mobile units including video options, but the space will always be restrictive when it comes to monetization. The bigger opportunity is on the publisher’s own site, where it makes all decisions about demand sources, ad units, and data usage.

This is not to say that publishers shouldn’t be taking advantage of platform publishing—it’s a great opportunity to reach certain (potentially new) audiences and show the value of your brand. At the same time, smart publishers are limiting the amount of content they prepare for these platforms and encouraging users to come to their properties for more and monetize them with advertising.

Another downside: the platforms can make that hard to do.

Return of the Ad Networks

Possibly the most successful of the rising mobile units have been native placements, with malleable creative that one can arrange to fit seamlessly within a publisher’s content. But the biggest drag here is that while native placements can be delivered programmatically, the majority of providers have adopted an opaque ad network model.

The most notable example would be the Facebook Audience Network, which many publishers can’t help but embrace due to high fill rates and decent CPMs. However, it’s well known that Facebook is a walled garden. There’s no chance the social giant will open up about the member data it uses for smart targeting. Publishers may be gaining revenue, but they’ve lost the control they gained through programmatic.

But mobile programmatic channels—namely open RTB marketplaces—and ad networks have a litany of issues. Advertisers are wary of them due to a high rate of invalid traffic (bots!). Publishers are also skeptical due to advertisers hawking low-quality ads (the return of one simple trick) as well as ever-lurking malware.

The biggest plague (particularly to the user experience) may be mobile redirects that send users to app stores or unwanted websites. These can be buried in creative or tags, and even constant scanning can’t catch them all.

Perpetrators switch company names constantly and take advantage of network and exchange appetites for volume to practice their wares. Fraudsters also can pose as ad networks, delivering publishers clean ads to lure them into a sense of security before dropping the mobile re-direct motherlode.

So publishers have to be extremely choosy about who they work with—often turning to trusted networks like FAN. Getting direct deals for mobile remains a bear because the inventory isn’t considered valuable.

But mobile programmatic could make a turnaround by taking a few cues from desktop. New technology such as single-request bid architecture in header bidding and header-based server-to-server connections are cutting down on latency in mobile header bidding.

This gives advertisers a better sense of how to evaluate publisher inventory, including proprietary mobile data. Publishers could ensure that only trusted sources are in the header, and leverage private marketplaces or exchanges to ensure the right advertisers get in.

These won’t solve all the woes of mobile programmatic or wean publishers off the ad-network teat, but they are moves in the right direction… as long as publishers employ smarter units. 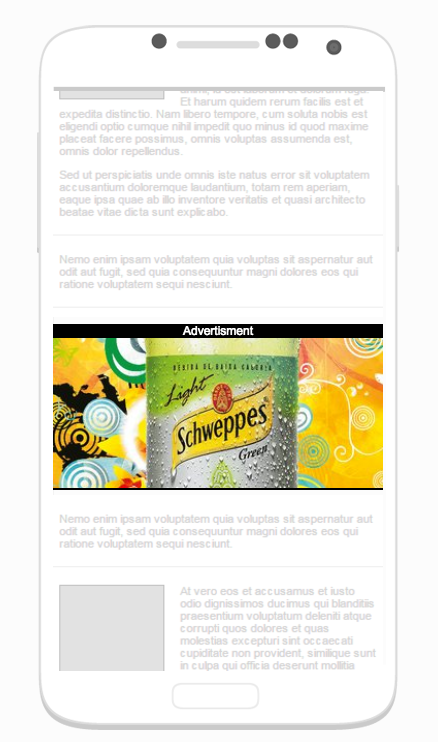 At its heart, the native placement is really just a banner ad with mildly dynamic creative. But that’s enough to deliver a non-annoying ad experience on mobile—and one that can catch the eye.

Expanding on that theme, publishers are employing HTML5-based smaller placements that scroll a larger creative with the user’s finger. When well-designed (and creative is always up in the air on mobile), these units disrupt the content experience to a minimal degree while proving visually exciting.

Moreover, with a simple template, companies like Smart AdServer can easily serve a mobile interstitial creative into the units and integrate them within the vertical experience of the mobile device. The technology makes this RTB-friendly, enabling publishers to leverage such native units at scale. Yes, a full-screen interstitial can be snugly fit into a 320X50 unit, and it proves a better experience.

The mobile adhesion banner, long a staple for both advertisers and publishers, is actually losing favor as it adds to a negative mobile ad experience—stealing too much space on a small screen, and then lingering. However, a variation on the adhesion unit that fades from view after a certain amount of time is growing in use. Not only does it cause less user irritation, but it can also can meet viewability requirements and encourage brand recall.

Finally, following SnapChat’s lead, publishers are experimenting with vertical video. Trouble is, advertisers pushing pre-roll haven’t quite caught up with them. Most publishers are having a hard enough time convincing advertisers to cut down their 30-second TV spots for mobile use, so asking them to reorient the video vertically sounds a bit much.

So publishers can rely on service providers to expand horizontally based pre-roll with a soft-focus echo that takes up the area that would normally be black. It’s the exact opposite of what is done on TV screens with vertically shot video. Both instances cleverly take attention away from fact the video is not appropriate size, but on a mobile device the result can appear artful.

Further, these aforementioned ad adjustments can be combined to create slick-looking experiences that conceal their disruptive nature.

Illustrating the increased prominence of units in the mobile space is the acquisition of mobile creative specialist Flite by Snap, the parent company of Snapchat. If a mobile success story like Snapchat is upping its mobile unit game, you better believe you need to re-evaluate yours.

Google Search’s attempt to mortally wound the mobile interstitial proves that 2016 was not “The Year of Mobile.” If anything, publisher mobile monetization efforts might have slid back, particularly with an increased reliance on opaque ad networks.

2017 is also unlikely to be The Year of Mobile, but progress is definitely coming thanks to programmatic advances and less-disruptive ad units. But even with the lure of platform publishing and native ad networks, publishers need to stay vigilant in balancing their monetization efforts with user experience concerns.

It may seem a burden in the short term, but it’s the only way to survive in the long run.