It seems none of us can get enough news lately—Axios calls the news “America’s biggest pastime” at the moment, but we think it might be more of a crippling addiction. And supply could soon be strained if news sites don’t get more money coming in.

Axios notes that traffic to news sites is way up; however, data from Yieldbird notes that while ad requests for news sites in its programmatic network are up 78%, ECPMs are down 10%. Overall, Yieldbird found that ad requests across its network were up 28%, but ECPMs were down 20%. 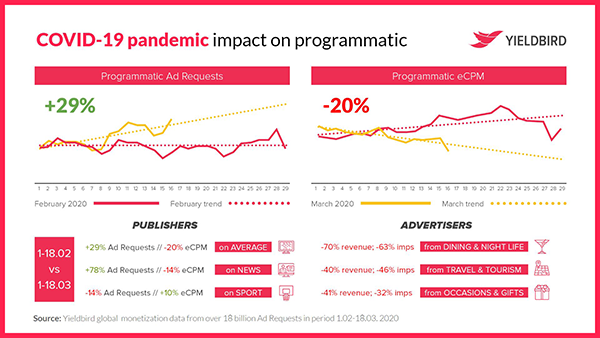 With most sports leagues currently suspended, it’s not surprising to see ad requests related to sports on the downswing (14%, but… the 14% rise in ECPMs certainly lifts eyebrows. It seems in some situations, advertisers are willing to dole out cash to market away from the pandemic—though definitely not in dining and nightlife (according to Yieldbird, revenue down 70% and impressions sinking 63%) and travel (revenue down 40%, impressions 46%).

If you’re grumbling to yourself that social media companies will probably be just fine throughout this crisis… think again. People may be more engaged on Twitter than ever, but Twitter’s CFO just warned investors of slumping ad revenue, particularly in the last few weeks. Social media marketing platform SocialBakers reports that ad spend on Facebook has nearly fallen off a cliff since the beginning of March. Overall ad spend on the platform has declined by nearly 50% since December 2019.

Goin’ Down to the Crossroads

We’ve noted for a while that guaranteed ad sales were going to take a hit during this pandemic, but were cautiously optimistic that programmatic revenue might pick up the slack. So far, no dice, but we are in early innings. (Are those enough mixed gaming metaphors for you? Man, we must really need some sports—watching the toddler slam dunk on her kiddie basketball hoop is not cutting it.)

However, it does feel like we’re fast approaching a distressing crossroads. Even though people are more active online than probably ever before, many publishers can’t monetize the traffic because they can’t draw advertiser spend. This is most evident on the local level, where regional news outlets are breaking traffic records left and right, but can’t squeeze any spend out of their regular local advertisers (many of which are businesses currently lying dormant).

Buzzfeed is warning of a “Media Extinction Event,” with massive industry layoffs and local news outlets collapsing in droves. Don’t think local publishers banding together will stop the bleeding—publicly traded networks of publishers like Gannett have been tanking in the market (though some investors see an opportunity…)

Oh, to get inside a brand marketer’s head in this trying moment… Wait, why not conduct a survey? That was a wise move by Wyzowl, a company that focuses on video explainer content. In polling 160 marketers mainly from the US, Wyzowl found 71% were reducing spend in physical events and 45% in print, while 31% were pushing more spend toward video, 31% toward paid ads, and 28% on broadcast. (I bet many a digital publisher feels they are yet to see these increases.)

But most interesting: 46% expect no reduction in marketing spend due to coronavirus, while 48% are already resigned to a decrease. Publishers are going to have a hard time waiting this out till the advertising faucets turn back on.

So consumers are demanding more and more content (particularly news), but digital media companies can’t pay the bills… At least not with advertising. Let’s think about this—advertising subsidizes the cost of content for consumers, so the next logical option would seem to be… subscriptions.

It was arguable that the industry was hitting subscription fatigue before coronavirus made it to these shores. Certainly with a major economic downturn cresting, consumers will probably be less likely to crack open their piggybanks for subscriptions. On top of that, Washington Post and New York Times have put coronavirus coverage outside of their paywalls, setting an admirable but potentially costly precedent.

Publishers might want to follow the model of companies like The Guardian, which basically solicits donations from highly engaged readers while leaving content open to all. In addition, consumer relationship management companies enable publishers to offer customized subscription products, such as sliding scales or pay-what-you-can.

Long story short—if you’ve been pondering some kind of subscription or consumer payment service, now’s the time to follow it to fruition. Also, chase down all of those alternative revenue schemes you’ve put on the backburner.

This story has been modified from a post in AdMonsters’ industry newsletter, The Wrapper. Perhaps you’ll subscribe to get even more sizzling analysis of the latest ad tech news?