Bad ads are a pretty terrible thing for the entire ad ops ecosystem.

By 2025 ad fraud—malvertising redirects and malicious IBV to name a few—will cost advertisers more than $50bn, accounting for 30% share of the overall digital market, so warned The World Federation of Advertisers back in 2016. But according to Confiant’s Demand Quality Report Q3 2018, the rate of malicious impressions between Q2 and Q3 2018 saw a sizable dip. 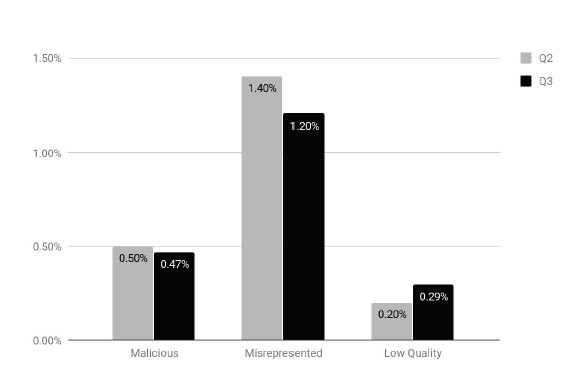 Keep in mind, this is only the second time Confiant has released such a report. The first, released with Q2 data from ads served up programmatically—Confiant monitors about 15 billion programmatic impressions per month—found that 0.5% (or what amounts to about 1 out of every 200 impressions) of ads contained malicious code.

Overall, Q3 realized security issues droping by 6% to a 0.47% malicious rate of open programmatic impressions, or think of users encountering malicious ads for 1 out of every 213 impressions served. The average Internet user is served approximately 11,250 ads per month, according to marketing strategist Mehmood Hanif. Of note, fraudulent IBV saw a significant drop and back-to-school triggered a huge increase in low-quality ads.

Still too soon to establish any real trends, the report does highlight some light seasonality, with June, July and August rates 10%-20% lower than pre and post summer.

What the report does overall, says LD Mangin, Confiant CEO and Co-Founder, is looks at the top 10 SSPs and looks at how well they did in catching issues before they become a major problem for publishers and users. While Google AdX, which was 10 times cleaner than the next highest exchange and over 10,000 times cleaner than the 10th, is the only name identified in this report, Mangin plans on releasing the names of the exchanges not doing as great a job with catching bad ads in future Demand Quality reports. 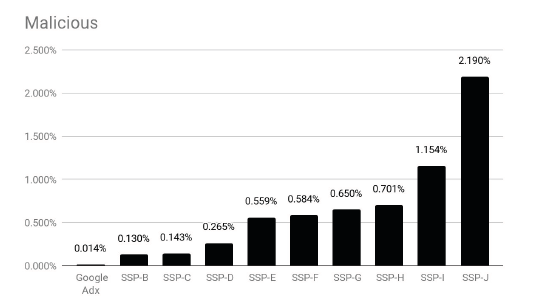 “Google has statistically broader data to drive analysis, so there’s a ton of angles to catch the bad guys,” explains Mangin, “We’re not doing this to name and shame people, we want to drive awareness and raise the bar in the industry.” Overall, 80% of all fraudulent IBV was bought by three DSPs and 50% of all security issues came through 5 DSPSs. This sounds like a fair warning. At its heart, the report is a tool to aid publishers in strategizing.

As you may well know, one of the biggest issues with ad fraud is tracking down the bad actors in the very complex system that is the advertising supply chain. Pair that with the fact that not every ad tech solution is scanning every ad, and those leaky pipes get busted really fast.

The report further breaks down the malicious impressions month-over-month, also looking at misrepresented ads and low-quality ads. As well as looking at the overall health of the top 10 SSPs, there’s a Q2 vs. Q3 comparison of the top 5 DSPs, and a look at the CPM distribution for the good actors vs the bad ones, along with more fascinating insights.