Amanda Martin, VP of Enterprise Partnerships at Goodway Group, always knew she wanted some kind of future in advertising but it was the technology innovation that kept her there. “I tend to get bored easily, but the ad tech industry has always thrown me a curveball before I get to the point of boredom,” says Martin.

During her keynote address, “Pubs and Agencies: Strange Bedfellows, Strategic Partners” at Publisher Forum in Scottsdale on Monday, November 4, 2019, Martin will discuss how clients, agencies and publishers can team up to hit those curveballs out of the park.

Like many advertising students, Martin originally planned on going right from college into an agency, but a national student advertising competition through the American Advertising Federation landed her an interview and an advertising sales job with A.H. Belo Corporation at The Providence Journal—a role that this native Rhode Islander saw as being too good to pass up.

Though her foray into digital was unintentional, once she was in it, she not only loved it, she knew she was on the right path.

What Martin didn’t know was how valuable starting out on the publishing side would be to her career as ad sales technology evolved. 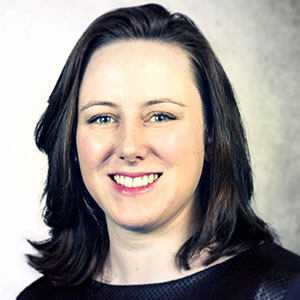 “I was here before a lot of the programmatic header bidding was in place, so I’ve lived through a lot of advancements in how we buy. On the publisher side, I was placing 300×250 in DFP that I sold at a meeting an hour before,” says Martin.

Eleven years and a few digital positions later, Martin was working on the publisher side of the ad ecosystem doing analytics for mergers and acquisitions when a colleague referred her to Jay Friedman, President of Goodway Group, for an Account Strategy position.

“I was fortunate that Goodway found me,” Martin says, “I was looking to stay in the field but without relocating from the smaller market that I live in. Goodway offered me an opportunity with a 100% remote workforce and it made sense to at least try it out.”

Earlier this year, Martin was promoted to VP of Enterprise Partnerships at Goodway Group, overseeing partnerships for both Goodway Group and the company’s spinoff Control v Exposed.

“We spun this off because we wanted to tone and nurture the talent we have internally that’s focused on the WHY and get ahead of the media activation so it’s more informed. It was a strategic move to meet the brand where they’re going and not with what has worked in the past,” explains Martin.

Adding Value to the Team

As her own experience has grown, so has the industry.

“How we physically buy and how we value different mediums has changed the most—and that will change the landscape moving forward,” says Martin.

To be successful in the field though, Martin stresses that understanding the path a bid now takes via an auction is an important part of making informed decisions about ad buys.

“We need to really value how much working media gets to the publisher, and to recognize who in the middle adds value and improves what you’re trying to buy.”

“There are so many elements of the path that people don’t know. Dig in to understand where it’s going, how it goes and how it most benefits you and the client from a performance standpoint,” Martin adds.

The client, after all, should be the agency’s biggest ally. “It’s so easy to get wrapped up in the technology, but you need to know what ROI you are truly driving and what business you are solving for. Your clients trust you to know how to get their end results,” Martin says.

According to Martin, that means getting to know everyone in the ad ecosystem and not blindly trusting those who are involved.

“We need to really value how much working media gets to the publisher, and to recognize who in the middle adds value and improves what you’re trying to buy,” adds Martin.

While Supply Path Optimization (SPO) has been a big driver of Martin’s goals for the past two years, Goodway is now reading the signals of ad tech’s future and shifting that discussion to a conversation about identity, or a cookie-less, ID-less world that still fulfills an advertiser’s needs and supports the internet.

“Cookies were never intended to be the foundation of targeted advertising. And as more media evolves, we need a new solution,” says Martin.

Martin envisions a more authenticated web experience—giving consumers the mechanism to consent to when they want people to see their information—as part of the solution.

And this next wave will bring publishers and buyers closer together.

“Publishers have a lot of control in these solutions because they are curating and controlling the content that consumers want so they are in a position where authenticated traffic will allow for a better one-on-one experience,” Martin explains.

Playing for the Same Team

Martin, who has been on both the buy-side and sell-side of the business, understands the value of both sides and how working together will improve the entire ecosystem.

“If we work together,” says Martin, “We could solve a lot of the issues we put between us because the two sides don’t understand one another.”

Join Martin at Publisher Forum Scottsdale for more insights into how the buy-side and sell-side can join forces to create a winning strategy.