TV Everywhere– the ability to watch any televised program at any time on any device- isn’t a matter of ‘if’ anymore but rather a question of ‘when’ once you consider the evolving viewing habits of US consumers and the changing dynamics of the pay television business. The ‘when’ for TV Everywhere becoming a mainstream consumer experience though will largely be determined by the letters F, G, L, N, P and R. Let me explain.

GRP: The metric used to allocate more than $60 billion in television advertising spend each year is known as Gross Ratings Points (GRPs). This figure estimates the size of the audience reached for a particular commercial during each television program over the life of the ad campaign. Unfortunately traditional online metrics like unique visitors, clicks and video starts don’t capture online audiences in a manner that can be translated into a GRP equivalent so broadcasters haven’t been able to take the credit they deserve, in the form of greater ad dollars, for delivering audiences to advertisers through their own websites and mobile apps or those provided by aggregators like Hulu. The thinking goes that if broadcasters could get compensated appropriately for aggregating consumers for advertisers, regardless of the screen through which the content is being watched, more television programming would be made available outside of the traditional TV model in hopes of capturing the broadest audience possible for ratings and advertising purposes.

Regardless of whether it’s Nielsen, comScore’s vGRP, or something else, bridging the audience measurement gap across viewing screens is an important step in bringing the discrepancy between digital ‘dimes’ and analog ‘dollars’ in advertising. This effort shouldn’t siphon money away from traditional television but instead reallocate ad spending in media to reflect the actual time being spent with media across different mediums, which will benefit the internet and mobile. The result will be an increase in advertising dollars for video across all platforms and the availability of more content to support this additional spend, which can most easily be made available to consumers via TV Everywhere.

NFL: Major League Baseball (MLB) has it. The NBA has it. Even the NHL, when they decide to get back to playing, will have it. The NFL? Not so much. What I’m talking about it the ability to watch any game live, in HD quality video across any number of connected devices. The NFL only offers its subscribers the ability to buy access to replays of games only after they have been televised.

With only 1/5th the number of regular season games versus both the NBA and NHL and 1/10th that of MLB, it is much easier for the NFL to package the sale of television rights at a national level for all of their games than it is for these other professional leagues (which rely on regional sports networks and local television stations to broadcast the majority of the regular season). Football’s reining popularity combined with the scarcity of game content versus alternative sports options has enabled the NFL to command $7 billion per year in total broadcast licensing fees from CBS, DirecTV, ESPN, Fox, NBC and Verizon Wireless to broadcast each and every NFL game (in comparison MLB generates about $1.5 billion in national broadcast revenues from a combination of ESPN, Fox and Turner). In the following chart you can see exactly why the NFL commands such a premium: 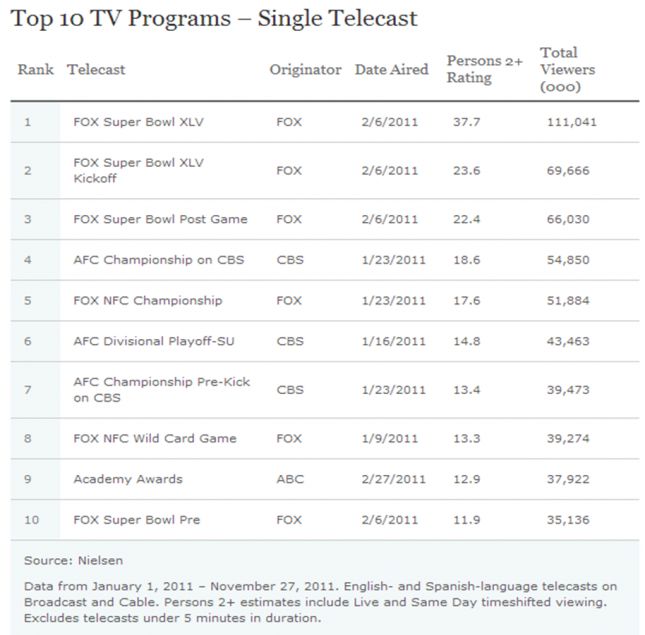 As you can see, the NFL is the only television program that can concurrently deliver an audience of tens of millions to broadcasters who in turn sell this reach to advertisers for more than $4 million for a 30 second sport during the Super Bowl.

The current agreements the NFL has in place with these 6 broadcast, cable, satellite and mobile providers run through the 2021 season so it could take another decade before the most popular content on television make a full foray across viewing screens (through the licensing of full content rights, including digital). NBC’s simultaneous live broadcast of last year’s Super Bowl on TV and the internet was a starting point, but without an economic model that can simultaneously grow revenues for the League while providing fans with additional access to content, the NFL has no reason to upset the current revenue apple-cart. When the time comes, expect GRP to play an important role in enabling this.

The issues surrounding TV Everywhere aren’t limited to just these two issues of audience measurement and content accessibility, but most other items, like user and device authentication, can be solved with improvements in technology. It’s the negotiations that will take place between content owners, distributors and advertisers that will eventually determine what user experience audiences are left with, which might not necessarily in the best interest of the consumer. If these three parties can find common ground with evolving consumer consumption needs though, not only will TV Everywhere become a reality, but the groundwork will be in place for the next evolution in television: unbundled, on-demand and IP-based program delivery.

This article has been reprinted with the author’s permission from Caliculated, Alex Calic’s blog. 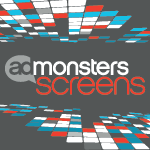 For more on TV everywhere and the multiscreen experience, stay tuned for AdMonsters Screens, to be held in London on November 19th. We’re bringing you best practices and new strategies for navigating the world of connected devices, featuring sessions from ScreenReach, Zeebox, Squawka, easel TV, BSkyB, BBC Worldwide, and O2 Media. If you want to learn more about managing media on multiple devices, register today!