Ad tech was once a world dominated by cookies, but its reign is soon coming to an end.

Apple and Firefox removed third-party tracking in 2019, and since then, half of the internet has operated in cookieless environments. Google keeps promising to follow suit, but now their cookie deprecation is delayed until 2024.

Publishers and advertisers are concerned that going cookieless will make it harder to reach their audiences and hinder their revenue growth. For publishers, the major concern is whether their CPMs will tank.

But, 33Across’ recent programmatic study argues quite the opposite.

The SSP’s findings show that programmatic display ad spending will skyrocket to $132 billion by 2022. Moving away from cookied inventory creates a large opportunity to bolster your revenue while being privacy compliant, especially for content-rich sites. Conducted between August and September 2022, the study identified emerging buy-side and sell-side trends for cookieless inventory on the 33Across exchange. 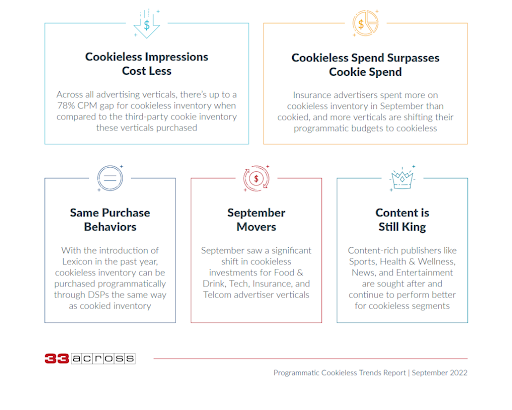 After 33Across launched their cookieless targeting solution, Lexicon, in 2021, the company noticed that key advertising verticals and publisher categories increased their investment in cookieless strategies.

Both publishers and advertisers who used these strategies lauded the benefits and here, 33Across emphasizes them with practical insights.

The CPM does not falter. Compared to third-party cookies, there is a 78% CPM gap for cookieless assets across all advertising verticals.

No drastic change in purchasing. Use of Lexicon makes sure that publishers and advertisers will not have to drastically change their buying and selling habits. Cookieless purchases can be bought and sold programmatically through DSPs much like third-party cookie inventory.

Boosts in budget and customers. Targeting cookieless inventory will nearly double campaign budgets and give access to new customers.

End Results. By the end of September, there was a significant shift in cookieless investments. Specifically for food & drink, tech, insurance, and telecom advertiser verticals.

While some patterns overlap between cookieless and cookied inventory, the study exemplifies that there is a sustainable future in a cookieless world. A world where publishers can thrive instead of aimlessly wandering in a barren desert. 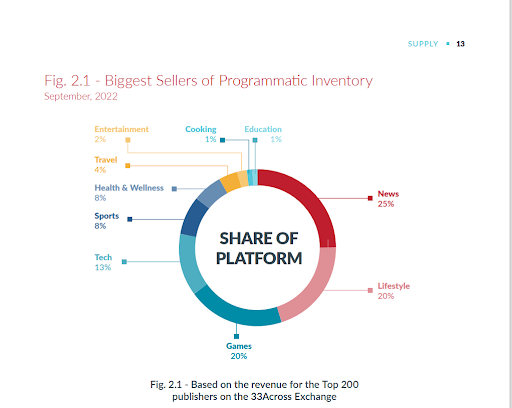 While cookieless inventory can benefit many publishers, 33Across’ research does emphasize that content-heavy publishers will benefit the most from these assets.

For example, content-driven publishers–News, Lifestyle, Games–sold the most programmatic impressions on the 33Across Lexicon.  This finding emphasized that despite which addressable state the assets are sold in, “advertisers spend money based on audience, brand-safe environments and performance optimization metrics.”

This should be great news for publishers who are worried about how privacy shifts have impacted the industry and their businesses. While the landscape may be different, a cookieless ad tech ecosystem does not have to equate to a sterile one.

“Inventory without third-party cookies is now the majority of supply and will certainly increase next year. We were pleased to see so many advertisers investing in cookieless efforts and the corresponding increase in publisher CPMs for that inventory from August to September 2022,” said Eric Wheeler, CEO of 33Across.

To conduct the study, 33Across analyzed the programmatic transactions on its Lexicon exchange. They examined both the demand and the supply side.

For demand: Showcased the top 10 advertising verticals on their exchange. These include auto, entertainment, finance, food & drink, insurance, pharma/OTC, retail, tech, telecom, and travel. The incoming results highlighted who spent the most on programmatic inventory, the investment breakdown between cookie and cookieless inventory, and the pricing difference between the two.

For Supply: They analyzed advertiser data from over 200 brands across 20 industries, the supply data of over 200 publishers across ten categories, and the spend data of over 3 billion monthly impressions.

This detail is important because many in the industry might inquire if cookieless inventory will work only for certain types of publishers or advertisers. The results show this can be an industry-wide benefit.

To see the full 2022 Programmatic Trend report, visit 33Across.