I don’t know what to expect when I load the Sonar app on my iPhone and click on the WIRED holiday pop-up store  in Times Square, NYC. Lo and behold, numerous names instantly appear, all of them in my general proximity. My Facebook, Twitter and Foursquare accounts are hooked into Sonar, so the app instantly shows my connections with these nearby souls. One person strangely enough is a Facebook friend of an ex-girlfriend’s sister (whom I’m not sure why I’m still friends with).

Another follows nine Twitter accounts that I do – not surprisingly, techie stuff like Tech Crunch, TechMeme and BetaBeat – and a simple scroll south displays all her recent tweets (including her announcement that she’s at the WIRED pop-up store). This attendee unfortunately doesn’t have her Twitter handle hooked up to her LinkedIn account, otherwise I might be able to see if she works in digital tech too and if we have any employment connections.

Sonar even offers the ability to tweet a shout-out to this person then and there – the Sonar app tweet template reads: “Hi, @_____. I saw on @sonarme that we share 9 Twitter interests so I thought I’d say hello! (@  Wired Store 2011).” All bases covered.

I’m trying out Sonar at the WIRED store because the granddaddy of digital tech publications tapped So nar in promoting its annual pop-up holiday store. As CEO and Cofounder Brett Martin explains, the WIRED Insider found within the app’s venue page is your virtual concierge – by answering a few questions in the Insider quiz, it personalizes your shopping experience, recommending a suite of products.

As I’m apparently a “Digital Gentleman” (why yes, I do read The Sartorialist), suggestions range from the best Apple toys to Matrix-worthy black leather jackets. In the future, Brett comments, Sonar may be able  to analyze publicly available data about me for an even more customized shopping experience. If other shoppers near me have also taken the quiz, I can see if they’re Digital Gentlemen/women too – and try to connect with them based off that information.

“We’ve spent the past 10 years uploading our likes and our followers and our fans and our resumes, but what good does this do us while we’re walking around, holiday shopping?” Brett asks. “The whole idea with the WIRED store was, how do you use online identity to customize your offline experience?”

This Ain’t No Ghost Town

While social networks and other online communities open the doors for seemingly infinite sharing and socializing, they also tend to fence actual connection around the Internet realm. Even with mobile-based social networks, the threshold from offline to online has proved an intimidating barrier. Sonar may have knocked it down with one beta swoop.

Digital presence is “similar to how we present ourselves physically – we dress a certain way, talk a certain way,” Brett says. “As our identity increasingly becomes digital, Sonar helps us take that identity down into the real world and project that in the meet space. We’re taking online communities offline so users can connect in the real world.”

Born in the K2 Media incubator in New York, Sonar has found a positive reception since launching in beta this past spring at the Tech Crunch Disrupt conference, where the iPhone app was a finalist during the Startup Battlefield competition. It’s also picked up the ad:tech Innovation Award for Mobile and won the Ultralight Startup pitch contest. Brett credits a lot of the fast success to its aggregative approach to building a proximity-based, mobile social network.

“A lot of people have tried to build apps that would work great if everyone else used them – that’s the ghost town problem,” says Brett. “We circumvent that by leveraging all these other networks out there to find out who’s here.”

Sonar aggregates check-in data from Foursquare as well as geo-tagged data from Facebook and Twitter to determine the people in your vicinity. At the moment, the location parameters are venue-based, but others like event-based are certainly feasible. 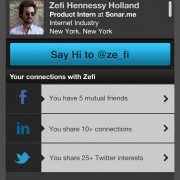 After a user selects a location and Sonar determines the people present, it’s a quick process of cross-checking interests (e.g., whom you are following on Twitter), shared friends and acquaintances, current and previous employers, etc., and then sorting them by the most relevant to the user.

Initially Brett and his were concerned about privacy issues, but all the data processed by the app is public. The people that turn up in Sonar’s venue listings are purposefully making their location known to the whole wide Internet – as Brett puts it, they’re “declaring their presence.”

“We’re not interested in finding people that don’t want to be found,” he says. “Unless you are looking for someone to notice you by publishing on the web, you’re not going to show up on Sonar.”

In addition, users don’t communicate through Sonar, but Twitter (though it registers pings). The app also offers the ability to check in on various location-based social networks. And since Sonar is venue-based, a user can employ the location search feature to see which of the usual suspects are hanging out at the local coffee spot.

As Brett explains, Sonar is just a platform on top of which users add various data layers to get a better view of the people in your neighborhood.

As the WIRED store shows, social networks are only really a launch pad, the first data layer employed from a nearly limitless supply. Other apps could provide more extensive connections: imagine a Spotify integration that would allow users to see what similar music the people around them were playing. A Yelp! integration could shows a user people nearby who like the same restaurants, which could come in pretty handy if you’re score a date.

But it’s not just apps – brands are already the biggest nodes in social media, and they can provide strikingly strong links between people. A tool like Sonar can show two people that both like Nike may also share an affinity for a certain basketball team. Sonar is attempting to provide a circular system that leads to further brand engagement.

“We know the best conversations occur at the water cooler, over the dinner table,” Brett says. “We try to foster those real-world conversations about your community, your brand, and then get that conversation back online.”

Included in the brand box is publishers: any website or media company that supports with an online community can further engage their users by connecting them offline.

“Publishers are already spending a lot of effort building online communities, getting followers, getting Likes, but the big question is, What do we do now?” Brett says. “Well, Sonar lets you take that community you’ve spent a lot of time and money building and help users download it to the real world – use it to navigate the people around them.”

Sonar has the potential to identify location-based micro-communities within a publishers’ online community. For example, Sonar could list off the hundred cafés with more than three New York Times readers sitting in attendance right now.

The question for NYTimes is, how do they want to engage that information to better connect their community? For example, Brett sugges 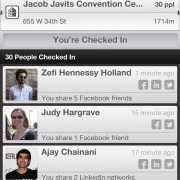 ts that two people commenting about the same article while sitting close together at a coffeehouse may enjoy discussing the topic face-to-face.

“The way we see brands engaging in our platform is to help connect their communities,” he comments. “What do you want them to connect about?”

Since its launch, Sonar has been approached by brands keen interested in the app and how it could work with their businesses. The company is shooting for the end of first quarter next year to release a series of turnkey products for brands. Through these, users will have the ability to see the world and people around them through the lens of that brand. Right now the app is all about users, and the team is still pondering a brand integration angle.

Brett can definitely see Sonar playing a key role in the burgeoning hyper-local social customer relationship management market. In its present form, the app can serve as a location-based social monitoring tool for brick and mortar retailers at the hyper local level – on a store-by-store basis, they can see who is checking in and what they like. The next step is leveraging information about people coming into a physical store to better service them/convert them, such as WIRED’s product suggestions.

The privacy-conscious may sniff surveillance in that statement, but it’s more like the social media extension of an eager sales person who eyes a shopper comparing prices on appliances. The people retailers would be monitoring through Sonar are declaring their presence online, and a declaration typically invites a response.

“It’s not even really giving up privacy,” Brett comments. “It’s choosing to be more public and reaping the benefits of that…. Sonar is less a consumption tool than a megaphone to project yourself in a place.

“Like wearing a loud shirt,” he quips. “Or just being well-dressed.”