Since most publishers tend to look at revenue only from month-to-month and not quarter-to-quarter or year-to-year, there’s a lot of misunderstandings from both the buy side and the sell side about the seasonal ebbs and flows of advertising. But armed with the right tools, ad ops can help both advertisers and their sales partners more clearly understand how to plan ahead.

“We want to empower ad ops to have better conversations internally when they have strong months now, but in January and June it’s not going to be the same,” said Brandon Gains, VP of Marketing at MonetizeMore. That’s why they’ve put together an Ad Revenue Seasonality Report for Q4. “In January, everyone is getting pressure from finance and accounting because in December they had such a great month. With information like this, they can take a leadership role in the organization about revenue planning and help set the tone,” he says. 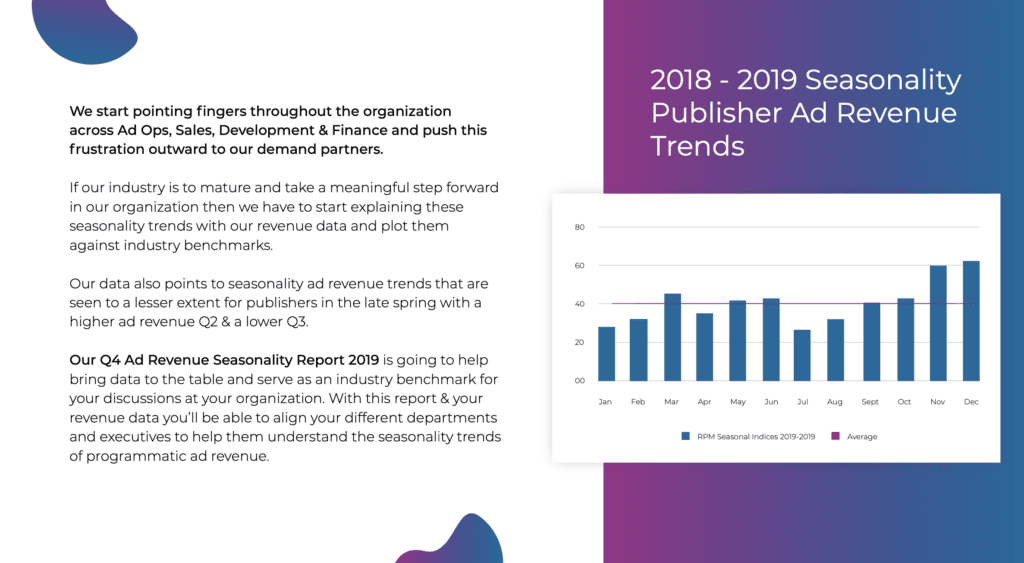 While much of this should be common knowledge, the ad ops department is often heads down in the weeds looking at month-to-month that they forget about setting expectations across their organizations.

It’s easy to get caught up in the day-today and be reactive, but having the right revenue data will afford you the opportunity to take a step back and plan for the right moments. “In the slow months, ad ops has more bandwidth to explore and prepare for the high seasons. Now is the time to set the right tools, work on hiring plans, develop a better audience strategy and get people ramped up for Q4,” says Gains.

When rev goes up in Q4 there’s always the inclination to think things will continue to rise, but that’s not the case. So when revenue dips, everyone panics forgetting to factor in seasonality. That’s why  with an annual revenue plan in hand that you can plot your company data against, ad ops can become more valuable to their companies. “This is how people go from being a contributor to a team lead, to CRO,” Gains shares.

You can’t fix your way out of seasonality, but you can be more strategic in how you plan.