While it may not be a surprise that the digital video channel is still on an upward trajectory in the U.S. when it comes to spending, the adoption of programmatic trading in this area has been rapid enough to raise some eyebrows. According to new research from Adap.tv and Digiday, video inventory purchases through exchanges and demand-side platforms tripled during 2012 in the U.S., with 19% of brand advertisers employing trading desks to pick up inventory.

This impressive show has made us wonder if Europe is headed for the same programmatic path, something EU-based publishers, brands and agencies can help us determine by taking a few minutes to fill out our European Video Advertising Survey. You might just be able to bring home an iPad Mini if you join in. 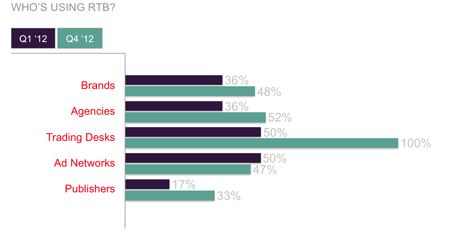 But back to the States: only 33% of the publishers surveyed were employing video RTB in the third quarter of 2012, compared to nearly half of all brands and more than half of all agencies. (100% of trading desks surveyed are on board the video RTB train). Notably, 51% of publishers are direct-selling video inventory, a big drop from 85% in the first quarter. While a third are opting for TV upfront

However, it seems private video exchanges are proving attractive to publishers, growing 20% over the last six months to a 28% adoption rate among pubs surveyed. Adap.tv is optimistic that half of all publishers surveyed may have private exchanges a year from now.s and a third are trying out the exchanges, 65% of publishers surveyed are selling their inventory through ad networks, a jump from only 47% in the first quarter.

During the third quarter, 93% of pubs surveyed said their available video inventory increased by an average of 67%. Seventy percent of publishers had average monthly fill-rates above 50%, compared to 21% in the first. Despite increased programmatic buying, the channel is still proving lucrative: an impressive 84 percent of publishers said CPMs were by an average of 12% in the third quarter.

As the chart to the right shows, video buyers have changed their minds over the year months regarding where budgets should come from. Twenty-seven percent in 2012 vs. 34% in 2011 said broadcast TV budgets were reduced and 13% in 2012 said cable budgets were slashed compares to 23% the year before. Indeed, it looks like for most the additional spend was incremental or – gasp – taken out of display budgets.

As we learned at AdMonsters Screens, there’s a general realization across the buy side industry that TV is here to stay, and that digital video should be a complementary operation. More than half of respondents said video initiatives should be aligned with TV rather than display, a 10-point leap over Adap.tv’s first-quarter findings. Fifty-eight percent of agencies said they are planning TV and online together currently and another 20% said they planned to in the next 12 months. However, more than half agreed that TV and video planning efforts now were too siloed.

So what’s with the buyer move to programmatic? We’ve heard a great deal of stories about premium publishers constantly being sold out. As Adap.tv’s fill-rate data suggests the demand for video inventory is very high, and many broadcasters with websites are taking advantage of demand during TV upfronts (perhaps you noticed agencies increasingly coordinating their TV and digital video efforts?).

It would seem many buyers are trying new channels to reach more eyes, perhaps slinking more into mid-tail territory – pubs in that area that haven’t integrated video RTB tech or made deals with DSPs and trading desks likely explains the tentative embrace of ad networks, most of which are RTB enabled. Eighty-one percent of the advertisers surveyed are buying video through ad networks, up from 61% in the first quarter.

However, look to continued growth of private exchanges, which allow publishers to programmatically sell more control over pricing and buyers – two things ad networks and exchanges can’t offer. It will also be interesting to see how quickly programmatic guaranteed pops up in video as well.

As Adap.tv’s latest survey paints a contemplative landscape of U.S. video advertising, the situation across the Atlantic is not as clear – hey, it’s a whole other continent. Are European agencies also compiling their TV and video efforts or are the channels more competitive? And is programmatic trading picking up steam or more of a long-off goal?

We’re looking for publisher, brands and agencies to give us insight into the European video advertising markets. By spending a few minutes on our survey, you’ll aid AdMonsters and our partner Adap.tv in illuminating the current state of European video for the global digital advertising community. To show our gratitude for your assistance, one lucky survey participant will also win an iPad Mini.