Last week in an interview with JUICE Mobile CEO Neil Sweeney, I suggested publishers view mobile as a quickly spreading itch that scratching won’t relieve. Do marketers feel similarly about the channel? Sort of – an interesting new survey from Acxiom, 4INFO and Forrester shows that marketers know they need to diversify their spends to reach audiences hopping across devices, but the lack of consistent mobile measurement and tracking make them uneasy to fork over the ad budgets. (Get it here with some PII.)

However, marketers seem to have a huge lack of faith specifically on the mobile piece: 93% of respondents claimed they would spend more budget on cross-channel efforts if they could measure mobile better. In 2013, 57% of the marketers surveyed said that less than half of their advertising campaigns were cross-channel. Eighty-six percent said they would have dumped more cash on mobile if they could measure against their preferred metrics.

What metrics are they measuring against? Oh, the usual favorites: clicks, website traffic, social interactions, post-click engagement. Perhaps some of the problem lies on the marketer side: less than half of marketers 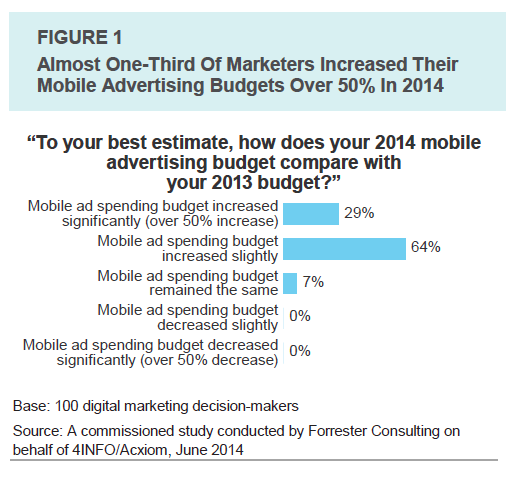 have defined objectives for their mobile ad programs; 42% are “experimenting” with mobile measurement.

Despite their concern about mobile measurement and tracking, advertisers are still dropping coin into the channel: 64% reported their mobile ad budgets increasing slightly while 29% suggested it had increased by more than 50%. At the same time, a 50% increase of a pittance ain’t much to shout about. On average, mobile only made up 5% of the marketers’ ad budgets, and 64% said their mobile budget for 2014 was under $1 million (with 17% putting that figure at less than $200,000).

The results for this survey may look very different next year thanks to the widespread rollout of mobile GRPs, that mystical preferred metric of marketers. Sure, it may seem like a step back to use a probability-based metric when hard ones are available, but this another step in the strange evolution of digital marketing: after TV-style metrics are available across channels, digital ones will invade TV. Another reason mobile GRPs will flourish is due to the proliferation of mobile video; video is the ultimate cross-channel unit and its increased availability will in turn spur cross-channel buys. Mobile tracking and targeting remain a bear as the industry sluggishly shifts from cookies to identifiers – device IDs (Apple’s IDFA, Android ID), probabilistic IDs and service-provider IDs (Google ID, the theoretical Facebook ID).

So it’s not to say that mobile GRPs will be the savior of digital advertising, but they’re going to be a game-changer. Publishers, though, still need to give a lot of thought over their approach to selling mobile inventory – particularly on the programmatic side.