Look, we don’t have anything against retargeters. Some of our best sponsors are retargeters, and we’ll be the first to say the channel occasionally gets a bad rap. Execution is the real challenge – too often advertisers blanket consumers with repetitive creative, possibly for products they have already bought. It can get to the point where brand association turns negative. Retargeting may be a straightforward art, but it’s hard to master.

Publisher audience extension, of which retargeting is the most basic form, is much the same way: To ensure against campaign underdelivery or meet an advertiser’s budget demands, a publisher can literally track down recent visitors on third-party sites and buy the inventory. But there’s much greater potential here – as I explained in an earlier article, the chief purpose of audience extension is building deeper connections between advertisers and publishers, and a bit of retargeting ain’t really going to do that.

Fostering tighter relationships with clients requires understanding advertiser objectives and aligning products to meet (or exceed these goals). In the case of extension, that means getting beyond the basics: taking the time to really know your audience; using audience extension to drive traffic back to your site; and finally understanding the importance of context in your off-site buying.

Truly understanding your audience is not something that can be done in a day, or two days… Or even through the magic of flipping on a data management platform. It requires a great deal of analysis and build-out for even a mid-level platform to get a handle on its data, so no surprise that Technorati, the third largest blog property with around 130 million monthly unique users, took its time in building a premier audience extension product.

“Our footprint is bigger than most,” comments TJ Stalzer, VP of Operations. “Lots of folks are coming onto the audience extension scene, but there’s not a lot of empirical evidence showing the value they’re putting out there. We didn’t want to rush it – we wanted to create something meaningful with a data backbone.”

While for a long time Technorati has used networks and third-party data to optimize audience extension efforts, serious cookie-synching is next on the network’s hitlist following the introduction a new publisher-facing portal. Technorati’s big plan for 2013 is building out second-party data segments for an audience extension platform that will sit on top of its supply-side platform, allowing it to leverage DSPs in offering off-site targeting capabilities to its advertisers. These “uber segments” have already proven their value within network performance.

“The value of the segments we will create will justify the price,” Staltzer says. “It’s a media product that’s part of an all-encompassing package for feeding engagement. Advertisers are reaching the same people, just not through the same vehicle.”

Just as valuable as understanding its audience, Technorati gets where extension fits within its canon of products. The publisher has long offered a suite of native-style influencer products delivered via its blogging community – as the company’s 2013 Digital Influence Report points out, 11% of brand social spend goes toward bloggers and influencers. So Technorati’s enhanced extension offers brands an impressive serving of audience juice to go along with that influencer flavor they’ve come to cherish.

Boosting the User Base

In a recent campaign with Map My Fitness, Quaker also headed down the influencer path, having bloggers compose sponsored content around its initiative with the burgeoning fitness site and app. However, Map My Fitness also forged an audience extension campaign to both promote Quaker’s sponsorship and build up its user base.

Extension can be a key resource in driving additional site traffic to branded content – Map My Fitness reached beyond its walls to find new registrants for a series of fitness challenges sponsored by Quaker. Working with Audience Accelerator, the Map My Fitness audience was cloned and then sought across the platform’s audience. Real-time optimization was employed as new users signed up to reach an even more diverse crowd.

The result was a 35% increase in challenge registrants – adding more than 5,000 users from audience extension to those that joined the Quaker-sponsored competition, making it one of Map My Fitness’ biggest ever. But the real question – were these new users enticed to come back? Seems that way, as Map My Fitness is still riding a steady ramp of traffic.

A Matter of Context

“Our embrace of audience extension was driven by the buy side,” says Skip Brand, Martini Media CEO. “They got comfortable knowing the audience was differentiated, and looked to us instead of just hiring a retargeter.”

Martini Media boasts a wide array of lifestyle and B2B sites aimed at the passions and interests of more affluent audiences – don’t think the super-super rich, but business people with six-figure salaries and respectable levels of disposable income. Martini argues that while these consumers are the hardest to reach through traditional media, they spend more time online than other income groups.

And luxury brands realize this – for example, Tiffany and Co. has been widely praised for its digital marketing efforts across platforms. Think of it as an extension of magazine advertising, which typically uses content as a proxy for audience. For Martini, audience extension is not just about knowing its audience, but also knowing where they like to hang out, and how they appreciate being approached.

“How you engage consumers on Martini sites is how you find them elsewhere,” Brand says.

Instead of relying on a list of approved list from partnering platforms, Martini has direct relationships with thousands of sites. How do you get on the list? First, have a beautiful, well-designed site. Just like in magazines, luxury brands want to be associated with pretty things.

“It’s more about whitelisting than blacklisting,” Brand explains. “Not as much for safety, but context and content.”

However, ensuring unduplicated audiences can prove a challenge. Brand explains that simply selecting sites with affluent audiences could lead to hitting the same users over and over. Searching outside the comScore 500 (or even 1,000) can open up the doors to niche sites with highly engaged audiences.

“A chief KPI in branding is time spent on site, and more time is spent on smaller sites,” he comments. “Small is beautiful, not scale.”

During The Weather Company’s recent NewFront, I consorted with Jeremy Hlavacek, VP, Strategy and Business Operations, WeatherFX, to make sure I’d heard right during the presentation – Weather was now offering an extension product?

Well, yes, he said, not with audience data but weather data. The Weather Company will buy applicable inventory on third-party sites, targeting via proprietary geo weather data mixed with insights from historical trends.

Though publishers may have “audience, audience, audience” beat firmly into their skulls by agency partners, they must remember that extension is actually the key word in the phrase audience extension. In fact, most of the above examples would be appropriately described as “reach extension” – which may include audience.

As the native advertising revolution has shown, advertisers reward publishers that push the envelope with engaging ad products blended seamlessly with site content. Extension efforts allow the revenue team to flex both its audience and creativity muscles – whether its packaging audience extension alongside high-performing products, using campaigns to also boost user base, or strategically weighing in context.

But how do you bring such a program to life? Basic audience extension is easy to set up – it doesn’t even require a DMP, but cookie synching with a third-party provider. As I noted in our last entry on this topic, some publishers are taking this further, dedicating a specific person to audience extension or an entire team and integrating a variety of tech platforms. The right configuration will differ from publisher to publisher, so AdMonsters is happy to offer a playbook to help you get audience extension off the ground.

And, for a more visual look at some of the findings from Audience Accelerator’s latest study, check out their newest infographic below. 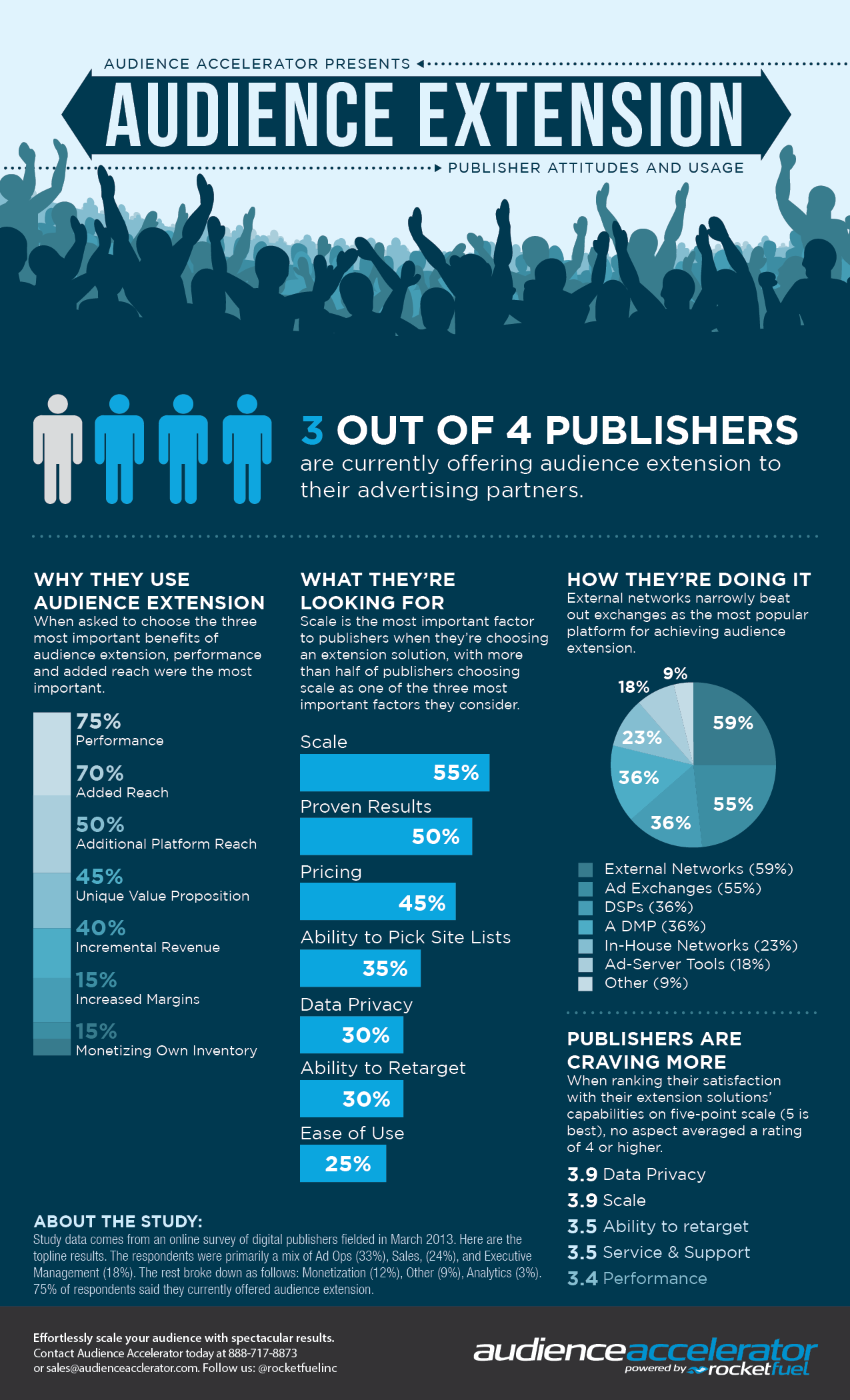