Following years of unfulfilled hype, mobile is now undeniably becoming a staple of mainstream media consumption, spurred for the main part by the success of the iOS and Android ecosystems. However, despite rapid advancements in mobile Internet usage, advertising revenues for the medium severely lag behind that of other digital media, no more so in the display space, the main reason being the difficulty in tracking ads served on mobile.

The majority of the issues stem from the robustness of mobile network coverage and its ability to supply consistent mobile Internet coverage. Subsequently, this has negative effects on campaign tracking. Most notably, the issue is preventing mobile ad networks and third-party ad serving technologies from drawing a greater share of the digital advertising spend.

There will always be some degree of discrepancy between the analytics of a publisher and a third-party ad server because of the differences in technology and the different points at which they count. But a lack of adequate mobile Internet coverage can lead to even greater discrepancies between the recorded number of ads requested by a third-party ad server and the recorded number of ads served. 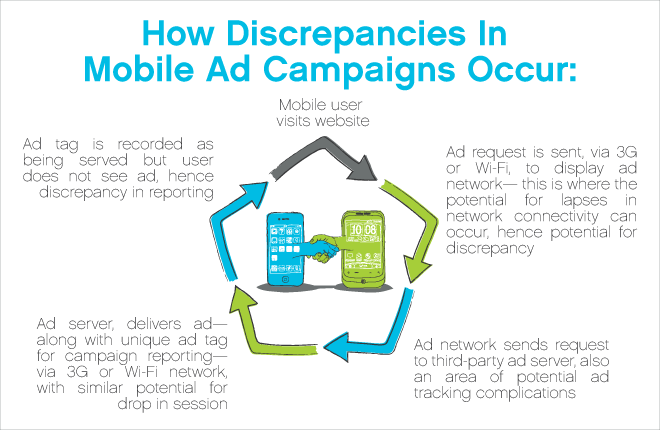 For instance, ads being served to a user via a third-party but then failing to load on a publisher’s page, for reasons such as a loss of 3G connectivity mid-session, can result in such lapses. The issue is also compounded by many browsers’ inability to accept tracking cookies as well as large file sizes, which take longer to load and give a user more time to move to another page before the ad creative is fully loaded, further distorting campaign analytics.

“The big concern with this issue you are potentially paying for impressions that you don’t actually get on things like brand campaigns,” says Andrew French, a trading director at mobile specialist agency Somo, when explaining just how serious an issue mobile campaign discrepancies can be for clients’ budgets.

In fact, sources approached from across the mobile industry said there isn’t even an agreed definition of what a mobile impression actually is.

Paul Childs, CMO of mobile ad network Adfonic, says the problem stems from a lack of agreed measurement standards stems from the online world.  “A lot of the existing technologies and reporting platforms of the online world don’t get mobile so of course there will be discrepancies,” he adds.

Richard Wheaton, MD of media planning agency Neo@Ogilvy, reiterates how a lack of agreed standards, both in terms of technology and discrepancy resolution, are holding back the potential of mobile.

“The mobile usage stats are compelling but the simple fact is, it’s still too difficult to serve and track direct response (DR) ads on mobile. Just because people have great smartphones doesn’t mean it’s a great advertising medium,” he says. “About 80% to 90% of DR ads are driven by measurability, and if that’s sorted out, it could greatly transform people’s appreciation of the [mobile advertising] medium.”

However, Amit Kotecha, an IAB mobile and networks manager, says the trade body is currently holding roundtables to both bolster awareness of issues around discrepancies and hear further concerns among media agencies.

“First of all, we need to educate more people on just exactly how discrepancy issues are caused,” he says. “Media agencies are used to the efficiencies of online and that’s the standard we have to meet.”

A major issue to be addressed is agreeing an acceptable discrepancy figure on mobile, online this has been agreed at 10%. “We’ll be talking to agencies about this in 2012,” says Kotecha.

“Make sure your traffic teams have regular training regarding cache buster implementation for the tracking of new and existing tags,” he adds. “Spotting things early can be the best tool for spotting discrepancies in a campaign before it delivers too great number of impressions.”

Meanwhile the causes of such discrepancies – like cache-busting (i.e., how impressions are counted) and timestamp faults (when the timing of the campaign is misrecorded) – will be addressed by the trade body in 2012.

Ad networks and third-party ad serving companies, who must interface between the publishers and media agencies, are arguably the most proactive in pushing the agenda in a bid to bolster mobile’s platform as an effective advertising channel.

“What’s needed at present is an understanding of the different ad technology and within a lot of agencies there’s a clear lack of that,” says Gavin Stirrat, managing director of mobile ad network Millennial Media. “The industry has yet to come up with an acceptable discrepancy figure and that’s a big barrier in the process of gaining trust. That’s what’s really needed to get big brands on board.”

At present many media owners, still getting around to monetizing on the fixed web, are still grateful for what little extra revenues already posed by the emergence of mobile media. Although if advertising dollars are to follow the eyeballs, then a more robust method of campaign reporting and greater level of knowledge is clearly required.

In fact, so large are the current complications that sponsorship is the only viable monetization model when publishers are launching a mobile app according to some figures.

James Bromley, MD of Mail Online, which has an offline reading mode for its iPad and Android versions, describes some of the unique problems posed by serving ads on mobile devices.

“With a lot of mobile devices, the content is read when offline [such as commuting while on an underground train network] so you have to cache ads within the app,” he says. “This gets quite complicated because you essentially have to build an app within an app that has the code that can report back whenever the user gets back online.”

Some publishers cite the complications of ad tracking on mobile, as well as Apple’s effective 30% tax on in-app subscriptions via the App Store, as a major driver for many publishers launching their iPad versions with sponsors.

Clearly a greater degree of cooperation and education is needed between the separate tiers of the industry if mobile advertising’s share of the market is to reflect its growing usage.

Ronan Shields Ronan covers mobile for New Media Age, as well as online portals such as MSN, Yahoo and AOL. In addition to writing his weekly column, "Shields on Mobile," he edits the monthly NMA mobile features section. Ronan joined New Media Age in March 2010 and has covered the mobile industry since 2006.