“Can’t wait to see ads on my Apple Watch!” said no one ever.

I’m sure that consumers are wondering what genius will be the first to spam them with belly fat ads on the Watch. When an ad network for the Watch was announced at CES in January, a million fanboys (in the ad industry) screamed out in agony. Or maybe that was just me, dying inside a little.

The Apple Watch will be a convergence device for activities like behavior and activity tracking, touch payments, voice response, passkeys, remote controls, alerts, and many more to come. Interactions will take the form of short bursts of relevant, timely and valuable information, prompting quick, snappy responses. It will be physically and situationally aware.

It’s worth keeping this in mind when framing the approach that advertising should take with the Watch.

There’s a difference between consuming information (quick alerts) and consuming content (engaging media) on a smartwatch. How will multimedia be consumed on such a small screen when the window time spent interacting with the Watch will be a few seconds? Instagram is already Watch-enabled, but will people scroll through several pics on their wrist? Or will they be satisfied with an alert and a thumbnail, and spend more time viewing the media on their iPhones? Probably the latter.

The Watch is the Twitter to the iPhone’s Facebook. Twitter is mainly a conduit to content that is elsewhere, while on Facebook you can do, and consume, a lot more. The nature of the Watch and its necessary connection to an iPhone, means that the ad experience will be an extension to mobile, not a standalone one.

Just as it became apparent that Mobile isn’t the Desktop, neither will the Watch experience be the same as in Mobile.  Each of these platforms is unique and much thinking will have to be made around the most compelling and engaging ways that people will use these different platforms.  But we should also consider how these platforms interact with each other. 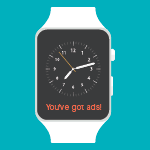 Medium Is the Message?

Over the next year or two we’re going to see an evolution in user behaviour as consumers adapt to the Watch.  Apple will be closely observing how their customers use it and iterate accordingly, so marketers should follow suit. Advertisers can no longer lead behaviour; they need to learn from, follow, and complement it.

Consumers will decide which brands they let onto what Apple states as their most personal device ever. Advertising effectively will require not just a data-driven approach, but also a behavioural and activity-based understanding of the user in real time.

Ads will need to be ultra-native to the Watch experience – messaging will have to be embedded seamlessly and elegantly into user interactions. We’re definitely not talking about text or display ads, and woe to the first advertiser accused of delivering a “pop up” message. If value – the cornerstone of successful native advertising – isn’t provided, a marketer will be immediately banished from a user’s wrist. Sponsored placements, if done right, might work – I’d pay for a watch face designed by Omega or Breitling.

Every notification will become a lot more important to the Watch user, particularly now that there’s a greater degree of physical interruption with a vibration that accompanies alerts, now right up against the skin. The common issue noted in initial reviews was managing the volumes of alerts – with multiple apps vying for attention, there will be even more need to provide value for every interruption that occurs.

People will start to become more judicious, even ruthless, in what they’re going to allow through to this device. The unintended impact of a greater volume of notifications might even lead to lower consumption of mobile apps and sites, meaning less traffic for the source properties.

Apple will collect and vigorously protect user data – a must if they intend to make inroads into the Health sector. So while it would be the ultimate in targeted advertising to key off of activities in real time (e.g., real-time, event-driven ad messaging), this seems very unlikely to happen without users’ explicit and granular permission.  It may be possible to have an app collect its own activity data with user permission, but I don’t believe Apple will allow marketers access to private behavioural or even physiological data.

For now the Watch won’t be a standalone device; it will need to be connected via Bluetooth to an iPhone, which uses wifi or cellular connections to access the greater Web. So the Watch will offload most processing to the iPhone to keep the Watch’s battery lasting longer. Looked at another way, the Watch will be another screen that a smartphone app or site will send messages to, in addition to the iPhone’s screen. Therefore consider the Watch and iPhone as a paired system.

A Bluetooth connection plus a mobile Internet connection will introduce additional lag in response to events, whether it’s from an app on the phone or an ad call. I have to wonder if Shazam’s music identification will be one of the biggest drains on the Watch battery and have one of the longest response times as an audio file is recorded, sent to the iPhone, processed, requested to the Web, and travel back to the phone and then the Watch. Real-time responses may be anything but, at least for a while.

The process of data flow may allow in-app interactions with the Watch to trigger delivery of messages on the smartphone.  So it may be possible that when a user opens up, say, a recipe app, the smartphone is directed to request the delivery of a food related ad to the iPhone’s screen. The Watch will be the eyes and ears, and the iPhone will remain the brain and heart of the system.

As with the iPad and the iPhone before it, the Apple Watch has not arrived fully formed with new use cases and consumer behaviors; it’s the start of a new experience. It’s not going to do everything we (or Apple) think we think we want it to do on Day One.

But within a couple of hardware iterations, and several software updates (coupled with novel contributions from third-party app developers), in under two years we’ll have a much more fully developed sense of what this new doohickey can do for us. I’m confident that the Apple Watch will be the ultimate smartwatch. At the same time, it’s going to take a while to realize its full potential.

Tom Marciniak has been working in the digital business space for over 20 years, most recently as the product manager for web and mobile advertising at a major Canadian media publisher. An unapologetic gadget freak and digital enthusiast, he’s owned every type of Apple device made. He wasn’t impressed, though, with having to wake up at 3 a.m. Toronto time to pre-order the Apple Watch.