Have you heard of header tags? Of course, you have – even ops people living under rocks have been inundated with tales of header tags, and it’s quickly become the new norm for programmatic-focused publishers. However, the tech is not without its controversies: while proponents claim header tags establish fairer pricing and bring CPMs to great new heights, detractors call it a latency-prone hack and describe the potential for decimating CPMs.

To get the real story, you gotta talk to ops people. Fortunately, we know a few. By now, most everyone understands that header tag implementation requires adding to site source code and sending data to a variety of partners before a page loads. But we wanted to know what’s it like to work with multiple header bidding sources, the ease of implementation, how header bidding is affecting revenue and CPMs for real-world publishers, how serious are the latency concerns and more.

The answers we received from the ad ops community were both expected and surprising. Most publishers are pretty satisfied with the technology despite its hiccoughs, but at the same time they are examining ways to scale and generally make it work better.

“There’s no doubt each deploy comes with complexities and has certain annoyances to it,” said Emry DowningHall of StudyBreak Media. “That said, I’m a big proponent of this tech and while it’s not perfect today, it’s important to keep in mind it’s still in its infancy as a scalable product and will absolutely improve.”

While the graph below features answers from specific ad ops professionals, we examined the trends throughout all the responses (including a few that needed to stay off the record). 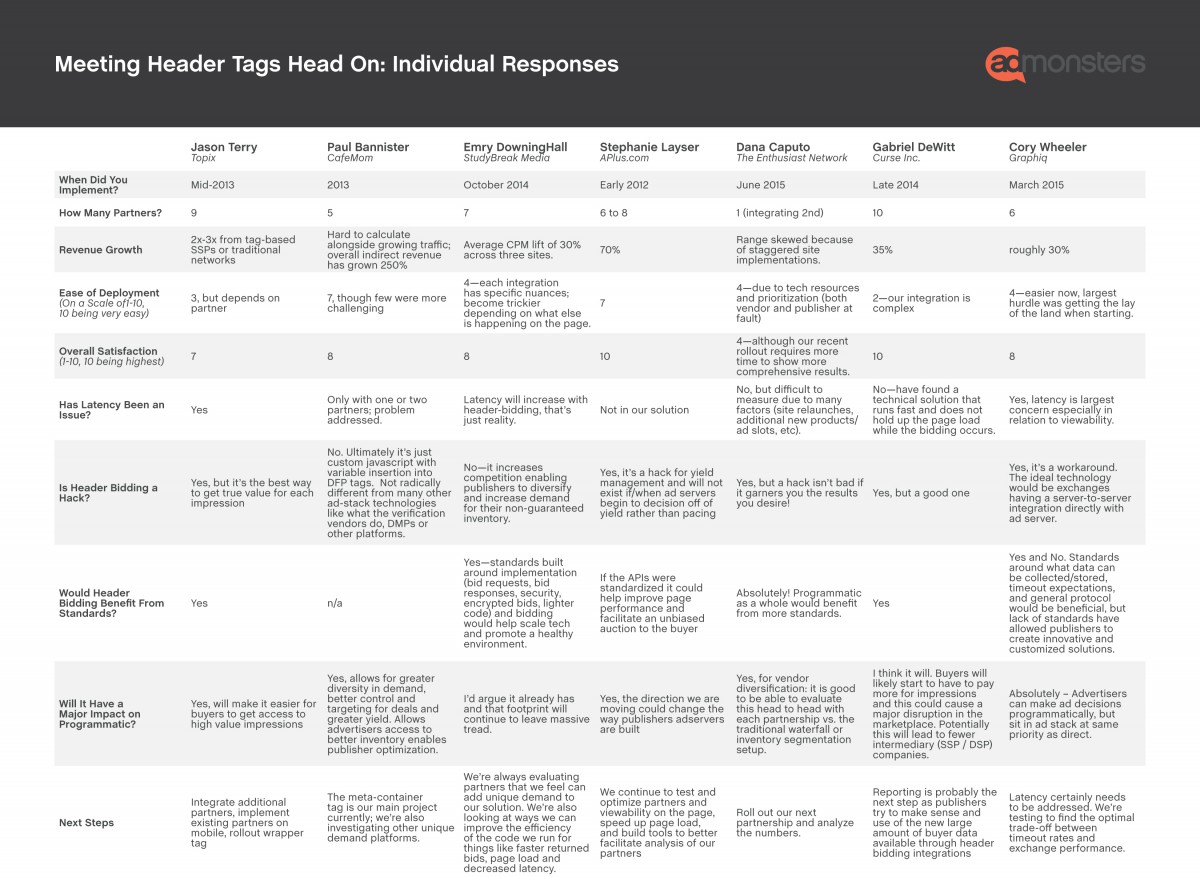 Revenue Up. Every respondent cited a revenue boost credited to header tags, but the amount varied greatly – anywhere from a 30% to 250% bump for indirect revenue. However, discerning what effect header bidding has had on revenue growth can be quite difficult, especially when analyzed against traffic patterns, or in cases where the practice was rolled out gradually over several digital properties managed by the same publisher.

Rise in CPMs (particularly in indirect sales, though these should be informing rate cards) can be a better way to judge effectiveness. You’ll also have to keep in mind private marketplaces or other tools you’ve been using to prop up indirect revenue.

Easy to Install? Maybe; Maybe Not. There’s no consistency in the ease or difficulty of implementation across publishers and partners. Respondents report this factor really depends on the nuances of both the partner (i.e., technologically) and the publisher (i.e., setup of the page), and the willingness of each side to prioritize the deployment. Integrations can certainly be affected by what else is happening on the page, including whether other header tags are being used. Documentation for integrations tends to assume the header bidder being added is the one and only, which is increasingly not the norm.

As with most tech implementations, good communication between publisher and provider(s), including full disclosure of page nuances and other partners, will go a long way in easing the pain of deployment.

Latency Happens. You didn’t think you could throw some code before the header and not get a little latency, did ya? Latency varies based on the number of partners, but also on the partners themselves. Most – but not all – respondents said latency was an issue for them – Cory Wheeler of Graphiq noted that it was his highest concern, particularly because of viewability ramifications. However, some said that latency wasn’t an issue in the case of header tags, or at least not detectably so.

However, latency detection is a chore in itself. Dana Caputo of The Enthusiast Network pointed out that site relaunches, new products and new ad slots all produce challenges for proper latency measurement. Some suggested at least making steps to put a cap on latency by setting time-out limits for bidders, or through other in-house work-arounds.

Just a Hack? When the implementation involves manually inserting code on the page in order to get the results you want… we know how that sounds. It sounds like it might be less a process unto itself, and more a hack on existing processes.

But publishers were split on their willingness to call header tags a “hack,” per se. When describing it as a “hack,” they’re inclined to do so without the pejorative connotations of your typical hack. Jason Terry of Topix was willing to call it a hack, adding “… but it’s the best way to get true value for each impression.” Caputo argued it’s a yield management hack that “will not exist if and when ad servers begin decisioning off of yield rather than pacing.”

Paul Bannister disagreed, saying the header code insertion technique is “not radically different from many other ad-stack technologies” implemented by verification vendors, DMPs and others. Whether or not header bidding is a hack, publishers seem to agree it’s at a relatively early stage of development, and what it is now is not necessarily what it will eventually become.

Standardize This. Publishers were divided on what elements to standardize, but generally suggested header tags, and the programmatic marketplace at large, could benefit from some standardization. DowningHall suggested that: “Standards built around implementation (bid requests, bid responses, security, encrypted bids, lighter code) and bidding (come on guys, net bids only!) would help promote a healthy environment for this tech and help it scale much easier.”

Impact on Programmatic. By all accounts in this survey, header tags have had an impact on the programmatic marketplace and likely will continue to do so. While publishers tout its potential to net them higher CPMs, respondents were quick to point out buyers are benefiting just as well, as header bidding gives them access to more valuable impressions, in a more targeted environment, through programmatic channels. “Technologies like header bidding are ushering in the transition from ad networks to private marketplaces and other programmatic advertising solutions,” commented Wheeler.

Some suggest header tags could have a significant impact on intermediary vendors, as well — specifically, that it could help publishers better evaluate vendor performance head-to-head, which could in turn lead to de-cluttering of the ground between publisher and advertiser as tech vendors succeed or fail in differentiating and proving their value. DeWitt predicted the rise in CPMs and what that means for advertisers’ wallets “could cause a major disruption in the marketplace.”

What’s Next? Next steps involve a variety of incremental improvements for different publishers. About half of the respondents mentioned taking a closer look at available options for wrapper tags, and whether they would be a good fit for their business. Most mentioned scoping out and eventually onboarding new demand partners, as well as gathering data for better analytics. Other agenda points include decreasing latency, optimizing for viewability and adjusting floors.

“We’re looking at how we can gather better data on partner performance (a lot of our current process is manual) so we can make faster, more accurate and informed decisions about things like price granularity and partner performance,” said DowningHall.