“I thought it would have jumped the shark by now,” says Terry Kawaja, founder and CEO of LUMA Partners. “But there are 10 of them now, constantly refreshed.”

Display, search, video, mobile, social – each of these channels gets its own LUMAscape, a horizontal canvas packed tight with overstuffed banks of logos, labeled with indigenous lingo such as “DSP,” “DMP” and “SSP.” Arrows attempt to guide viewers through these fragmented panoramas, allowing them to see the digital journey from advertiser to publisher, marketer to consumer, developer to gamer and more.

“They’re only increasing in popularity,” Kawaja comments before pulling up the latest stats from SlideShare – the previous week, LUMAscapes were viewed and downloaded around 9,300 times. And this isn’t just an American fascination, but a global phenomenon – in the last two days, browsers from 36 countries have hit the charts, 116 total since they first appeared on SlideShare. Seven books have been granted copyright permission to use them and goodness knows how many whitepapers and decks various LUMAscapes have popped up in. 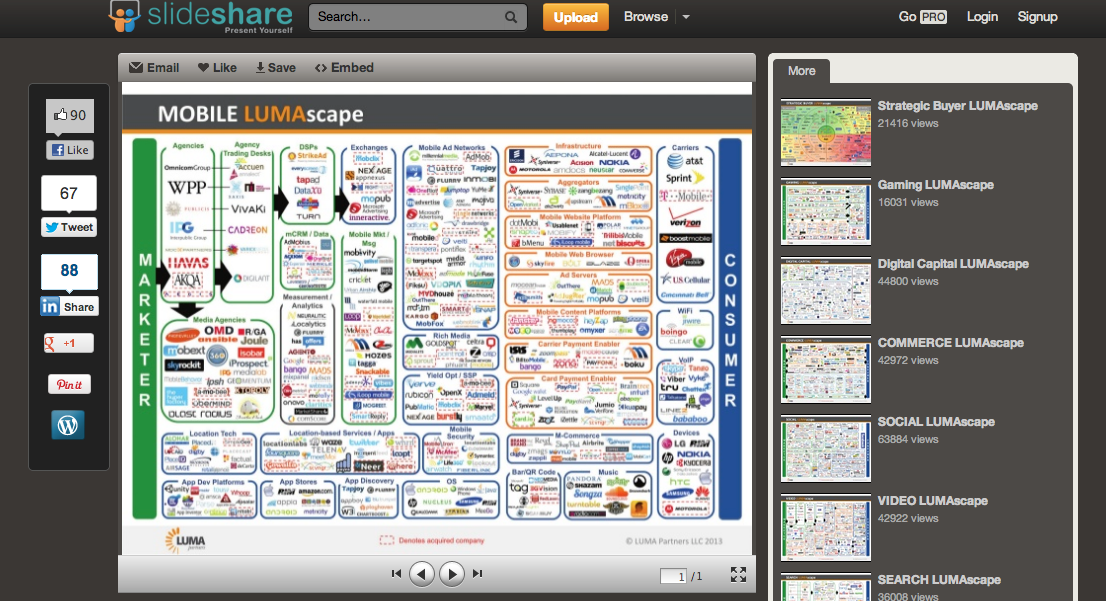 Several of these landscapes have become an integral part of the discussion surrounding the future of digital media monetization. As LUMA Partners Investment Banker Amanda Bicofsky – one of the original architects of the LUMAscape – will show during her keynote at AdMonsters’ OPS Markets April 4 in NYC, analyzing between the rows and columns stuffed with logos can provide acute insight into industry trends. At the moment, these include the ever-growing mobile opportunity, increasing connections between content and commerce and how the role programmatic trading is stabilizing.

Yet the elaborate arrangements of the LUMAscapes are also a source of heavy confusion to advertisers and publishers – and the companies behind all those logos in between. Frustration often follows references to the landscapes, with claims that its mission to include every single little player in a channel actually muddles the view of the digital media space’s development. In February, the IAB introduced its own advertising technology organization chart, commenting that: “The digital advertising ecosystem has been opportunistically portrayed with excess complexity to the benefit of bankers and to the detriment of marketers, brands and agencies.”

Kawaja was merely amused by that line. “How can it overcomplicate the ecosystem by simply recording all the companies in it?” he chuckles.

“We’ll be the first to say the LUMAscapes are imperfect,” he says. “We can’t characterize every company by exact type and accurately show differentiation within subsectors. It’s only a representation.”

To understand the role the LUMAscapes play in the digital advertising industry, you must understand the origins of the idea – and examining the development of Kawaja himself and LUMA Partners is also insightful. The LUMAscapes were not created as a guide for tech startups to figure out where they fall within a fragmented ecosystem, but as a corporate development document assembled for the purpose of M&A.

A Dynamic Kind of Guy

“I would have been a horrible banker to the pipeline industry because no major changes have occurred in the last 50 years,” Kawaja says. “It’s really boring.”

The maturation of Wall Street gave rise to a pack of generalists that jump from industry to industry, but that wasn’t the path Kawaja pictured for himself. When he started in media and telecommunications advising at Salomon Brothers in 1989, it became clear to Kawaja early on that while telecoms were operated by monolithic corporations, the media owners were the entrepreneurs. The big studios were iconic properties, run by sharp guys.

“Media was super dynamic and filled with really smart people, and on the dynamic side was where I saw an advisor fitting in,” he says. “In a dynamic industry you need specific industry knowledge to give advice.”

And media was certainly an industry in flux, with regulatory changes in the ’90s revolutionizing the broadcast industry and opening the floodgates for a steady stream of M&A. By example, Kawaja was involved in 14 of the 16 biggest UK cable mergers and acquisitions in the 1990s.

After witnessing the enormous advantages of specialization in dynamic markets, Kawaja set his sights on digital and digital only in 2003, which one could also point to as the germination of the LUMAscapes. As a visual person – “A picture is still worth a thousand words” – Kawaja developed the first blueprint for the LUMAscape in 2005 to wrap his mind around the incredibly complex digital ecosystem. It was a personal reference point, but around February 2009 the document began being passed around internally at GCA Savvian, where Kawaja was co-head of Digital Media. By October of that year, it started spreading externally.

In May 2010, Kawaja gave the keynote at the IAB’s Ad Networks and Exchanges conference, walking the audience through the nooks and crannies of the first display LUMAscape. Overnight, he became widely known as the cartographer of the digital advertising industry. According to SlideShare, this presentation has been viewed and downloaded around 75,000 times.

By that time, Kawaja had struck out on his own by founding LUMA Partners, named after the technical metric used for measuring the brightness in a video pixel. 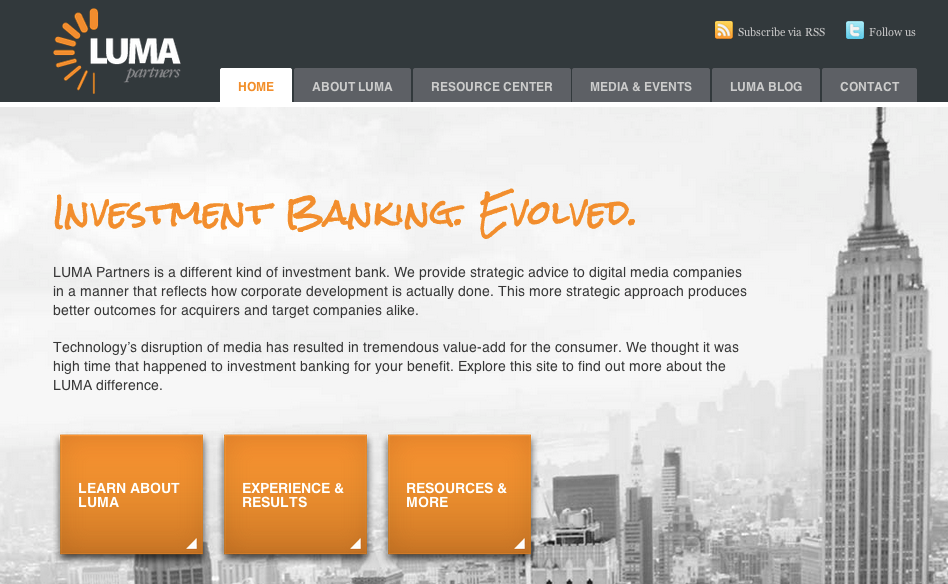 For those wondering exactly what LUMA Partners does, blunt language on the about page of its website explains, “we help companies get bought.”

“Good companies get bought rather than sold,” he says. “Getting sold is easy: you hire a bank, write up a book and try to create an auction. That’s the typical way investment banks approach M&A.”

In the highly dynamic, constantly evolving world of digital technology, this “supply” approach is downright detrimental. The last thing a digital firm wants is to be put up for sale, he explains – despite the huge opportunities out there for digital innovation, you’re saying you want to give up.

The digital evolution showed him that this brave new world required investment bankers to develop a new approach to intermediating M&A – a “demand”-centric approach focusing on the major acquiring companies.

“Go to any of the big acquirers’ offices – IBM, Google, Oracle – and you’ll see a LUMAscape on the wall of the strategy division,” he says. “That’s the purpose of the LUMAscape – it’s the corporate development person’s nirvana.”

Kawaja advocates a three-pronged approach to LUMA’s intermediation process. First go deep into the space – understand the current players, the underlying technology, as well as the needs and desires of the principles. In particular, what’s going through the minds of the large companies in terms of future trends, preparation and investment?

Next, he sources the deal flow through the demand side – not the marketers spending money but assisting larger potential acquirers regarding strategies. What do these companies need? LUMA becomes an essential third-party consultant for identifying potential matches.

Finally, LUMA represents the target company in the M&A process. “The result is the seller is considered for an exit when they are not for sale,” he says. “They’re happily independent, and then the big strategic company says, ‘I want to buy you.’”

There’s evidence to support the effectiveness of this approach, namely LUMA’s centrality to some of the biggest deals in ad technology: Donovan Data Systems’ merger with MediaBank in 2012, Google’s acquisition of SSP Admeld in 2011, Adobe’s acquisition of DMP Demdex in 2011 – and that’s just for starters.

Considering LUMA’s approach, it’s understandable that for Kawaja, the most important LUMAscape is the one of Strategic Buyers.

This is also the chart that looks the least like the others –150 of the largest relevant buyers of digital start-ups are split into four quadrants based on type (technology, network/commerce, marketing, media). Marketing and media are on the defensive side (acquiring as a response to market disruption) while technology and network/commerce are on the offensive side (boldly venturing into new territory). In the center sit the kingpins of digital startup acquisition: Google and Microsoft –straddling tech and commerce – as well as Yahoo and Aol – between media and marketing.

The chart actually gets even more complicated (and fascinating), but these main points are of particular interest given imminent consolidation. Oh yes, just like the motto of House Stark from “Game of Thrones” is, “Winter is Coming,” “Consolidation is coming” appears to be the perennial cry of ad tech industry observers. However, take a look at what Kawaja terms “LUMAscape whack-a-mole” – comparing the 2012 and 2010 Display LUMAscapes, 53 companies were acquired while 74 new ones appeared.

“When I look at the LUMAscapes, I don’t see what everyone else sees,” Kawaja says. He describes building a “headache” filter with a client to locate only firms doing $50 million or more in revenue.

“I don’t see all those small companies – the point solutions and small players,” he explains. “You gotta see through it to the underlying simplicity – how it really works.”