Acquiring high-value users has long been a key goal for mobile apps. But the ecosystem has evolved, lowering the ceiling of building a mobile user acquisition (UA) strategy off a single platform. To succeed, app marketers and developers need a comprehensive multichannel strategy that adopts more creative and technically sophisticated ways to identify prospects, target them, measure success, and optimize campaigns to drive reliable, long-term user growth.

Gaming apps have historically been at the forefront of UA, but non-gaming apps are increasingly generating their own strong results, as evidenced by their increased revenue. In fact, according to Sensor Tower data, over half of App Store spending in the U.S. now comes from non-game apps, and in Q2, iOS users in the U.S. spent more money in non-gaming apps than games for the first time ever.

UA has evolved from a mono-channel, narrowly targeted approach, which enabled app developers to test on a relatively small budget, to a complex operation involving various sources of growth and a meaningful investment to make experiments worthwhile.

Why Gaming Apps Have Led the Way on UA

Gaming apps are known as the bellwethers of mobile marketing. In large part, this is because the economics of UA in gaming are more forgiving due to each user’s high potential lifetime value (LTV).

For example, gaming apps will more frequently land what those in the industry colloquially refer to as ‘whales’ — users who spend tens of thousands of dollars on in-app purchases to further their enjoyment of a game. Those who spend the same on e-commerce, finance, or food delivery apps are less common.

As a result, gaming apps do not need to be as sensitive as their non-gaming peers to short-term results. They can test longer with the confidence that if their UA strategy generates some success over the course of the longer period of time, the whales will justify their UA spend. This allows gaming developers to test for longer, eventually reach an inflection point in learning and strategy, and then see their acquisition efforts take off.

By contrast, non-gaming apps are more sensitive to performance goals and budgets — specifically in the early stages of a campaign — and keeping the spend strictly within the planned budget. They must follow best practices more closely to build sustainable businesses and hit that inflection point with an increased sense of urgency.

Acquiring high-value users begins with an effective channel acquisition strategy. Marketers must understand the channels compatible with their specific app’s audience and goals. Then, they need to determine their budget and how much they need to spend to hit a critical mass of experiments that can drive more efficient performance.

The latter piece of the puzzle is timing and expectation setting. For example, business leaders unfamiliar with the dynamics of UA may want to set acquisition targets for the learning phase of a campaign. But that is often impractical because the business does not yet have a frame of reference for its UA costs and how to make its efforts more efficient. Instead, marketers need to understand industry benchmarks — gaming being the bellwether — for how much they will need to spend to learn before they can start setting and hitting performance KPIs.

Next up is channel allocation optimization — which is about a combination of performance and volume. Budgets are allocated across channels in a way that will deliver particular payback within the required timeframe. This could be breaking even on a high volume within a year or reaching 115% D90 return on ad spend (ROAS) as it can already start turning a profit after the first 90 days but on a minimal volume. The purpose of the exercise is to factor in individual channel performance at the particular scale and combine it with others to complement each other to reach the general goal.

It takes technical heft to efficiently find high-value users across an array of platforms. Take Miami-based Picsart, which saw new users and increased its performance with its network partner. In addition to driving installs and increasing conversion rates, Picsart maintained a top-5 position in the highly competitive photo and video category for U.S. iOS. And the app became one of its network’s top-performing in terms of cost per engagement and conversion rates.

In addition to optimizing channels, mobile marketers should also test and improve creatives with the help of analytics. How do different aesthetics and copy work across audiences, verticals, and channels? How can creative be adapted and targeted to eliminate waste and identify the highest-value users? The stand-out networks will approach their clients’ creative strategy in a consultative way to see what works best vertical to vertical. They’ll work with clients directly to get the most out of their UA by guiding the process from concept to final production.

Marketing analytics and measurement should deliver clean, actionable data across all the channels you intend to buy from, specifically cost data, and the ability to map it to revenue and easily create relevant metrics for your UA. These could be D7 retention or D0 ROAS, for example, as long as they are presented in a clear and actionable way.

Lastly are predictive analytics, which are a great investment because predictive lifetime value (pLTV) models drive the goals and actual buying decisions. So the more accurate the models get, the more efficient UA.

A pLTV model can be a trivial one based on average values. Average Revenue Per Daily Active User (ARPDAU) is used with retention factored in to determine an average user’s LTV. Or it can be regression analysis based on user-level cohorts that drives a much more accurate result. Still, it will take much more data input to be useful (e.g., purchase verification for subscription apps and user-level ad revenue for ad-supported apps).

Lastly, all of the above depends on continuous experimentation in creative, UA, and predictive analytics, by a team with a diverse set of skills and an analytics stack you can trust. Gaming or not, successful mobile growth teams are multidisciplinary. They include designers for creative works, data scientists for predictive analytics, and UA professionals to execute on ad channels from an operational and business perspective, as the underlying goal of the organization itself is to deliver customer growth at a certain performance and volume. 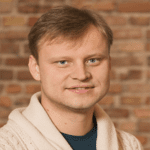 Andrey is Vice President of Demand at AppLovin, a leading marketing software company providing developers a powerful set of solutions to grow their businesses. He leads the team responsible for non-gaming advertiser growth, including direct advertisers, agencies, demand side platforms (DSPs) and network partners. Andrey joined AppLovin when the company acquired Adjust in 2021 where he held multiple leadership roles and was Adjust’s COO and then President, currently serving as its Chairman. He is the co-founder of Acquired.io, a data aggregation platform which was acquired by Adjust in 2018. Prior to that Andrey co-founded AppScotch which pioneered advertising intelligence and was later acquired by App Annie.