This industry of ours does not just lend itself to creativity and innovation – it craves it. This is our very lifeblood and it’s what makes digital the most fast paced, innovative and ultimately lucrative side of the advertising industry.

But when looking for creativity and innovation far too often we’ve been guilty of looking to one another, what are our competitors doing – how could we do it better? That’s great – let’s put a clock on it.

That’s all set to change though thanks to Turn.

You and I may know Turn; their innovative end-to-end management platform and targeting technology are real viable alternatives to Google’s array of products in the ad tech sector.

Turn already enjoy a huge footprint in the US and are expanding across Europe – but you speak to your average media buyer and they couldn’t relay this information back to you, let alone tell you the key players in the ad tech marketplace.

So, Turn have shelled out an estimated $500,000 on an incredibly daring and innovative campaign featuring a primetime TV spot during the season finale of Mad Men (airing in the US on June 10) to tell the story of how advertising has changed since Don Draper’s heyday. 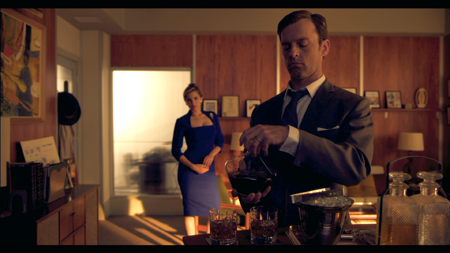 You can’t fail to enjoy the double dose of irony here, a targeting ad platform using a mainstream scatter gun approach such as prime time television as well as an advertising company advertising on a show about… Well, um, er…advertising.

But, it’s these very talking points that make this an innovative and fresh campaign, well that – and the ad itself.

Set in the offices of a 1960s Madison Avenue agency, the ad features an impeccably groomed ad exec about to begin a tryst with a shapely young female from the secretarial pool when another woman walks in.

The sense that this might be a preview for Mad Men’s upcoming season is broken only when a gun is fired and the scene shifts to super slow motion with a voice-over likening the “10 milliseconds” required for the bullet to traverse the room to the speed of Turn’s digital advertising platform.

Viewers will then be directed to a microsite to find out what happened at the end of the ad and of course find out more about Turn themselves.

Will this be the game changer? What results to Turn expect from this campaign? Is this purely branding?

If nothing else, as I mentioned before this industry of ours is based on innovation and creativity and why should that be limited only to our technology? We harp on about the need for good creative and here’s a fantastic example of it. Well done Turn – we’re all waiting on the results and of course… what’s next?

AdMonsters alum Gautam Srivastava is a digital marketing, editorial and content expert. G – as he likes to be known –worked alongside some of the brightest minds in the online advertising industry whilst as AdMonsters and has now moved on to run his own editorial team covering all things digital. Follow him on Twitter: @Technolo__G.