No one will argue that the Display marketplace is an incredibly fragmented and inefficient system. Try as they might this advertiser driven ecosystem has created a few problems long hidden by overinflated CPMs. First are the serious issues in the market’s ability to scale. Second, is the arbitrage and optimization often occurring in conflict and silos. Third and worst of all, the ads suck.

In contrast to Display, Search over a shorter period and having grown-up as a publisher side solution has 2 million active advertisers – all participating in a real time auction based systems based on a single criterion, ad performance. The contrast is startling as are the results – Search spend will double that of display this year.

Just like Wall Street, Madison Avenue also has that New York City reality – if you’re losing money then someone else is making money. Once spend hits the street it is a zero sum game. Into this fragmented world of media buyers, planners, ad serving and publishers came the ad networks – ostensibly filling a huge need for publishers. Yet it now seems ad networks are the collateralized mortgages of the online world. Just the other day Tim Armstrong declared the AOL want to be the digital equivalent of Goldman Sachs, so the analogy has some credence.

This has allowed two things to happen. On the sell side as inventory increases and prices drop, the media ROI for performance marketers continues to increase. So too does their spending. 57% of display advertising was performance last year (IAB/PWC). This year the number will increase for fifth consecutive year at the expense of branded CPM. First half 2009 online display ad spending continues shifting to pay for performance with greater velocity: (TNS +6.5% (CPM +CPC/CPA); Nielsen -1% (CPM only). 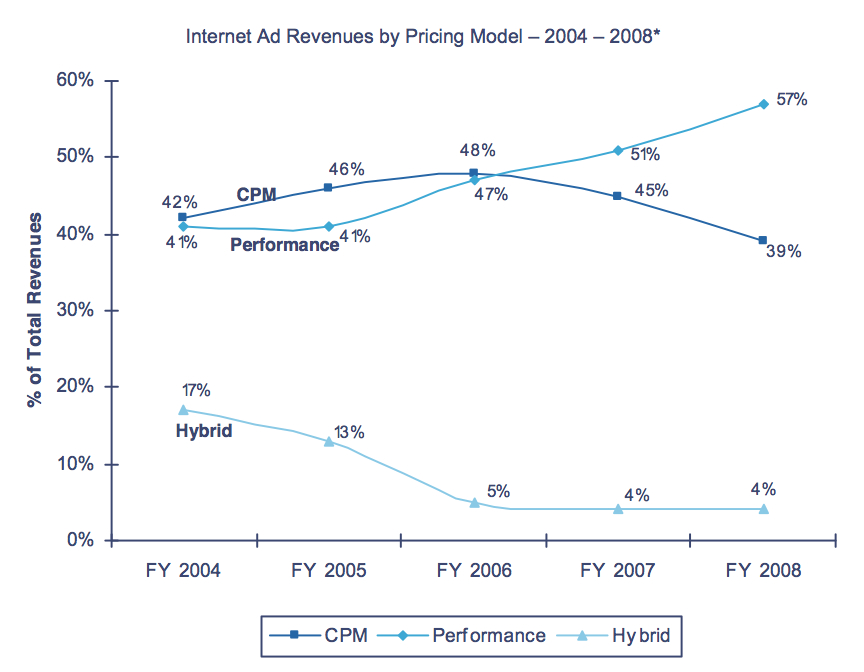 On the buy side what’s happening is that while Premium CPMs keep dropping those rising performance spends are being kept at huge margins by networks. For every remnant media dollar roughly a quarter of that is kept by the agencies, a quarter goes to the pubs and half or more of it goes to networks. It’s a damn fine business. No wonder VC’s have funded it up the wazoo to the tune of 2 billion over the past few years.

The problem is all of this is cannibalizing the channel. Better tools have produced lower yield for publishers and higher ROI for performance advertisers.

If there is too much weight on one side it sinks the ship. Publishers can’t survive with this inequity much longer. They own the audience and the content. The value is being created in their environment. They deserve more.

The media reality is that publishers are getting $7k in revenue from inventory being monetized at $48k (I know, I’ve run these RON performance campaigns). The content reality is that in digital power shifts away from the content and towards the distribution of it. The same way Search has done this with content so too have the ad networks done it on the ad side. It’s time for pubs to take the power back.

It’s beginning to happen. A number of publishers are turning into marketing agencies themselves. Meredith has just hired Martin Riedy CEO of Publicis Modem to lead its 400 employee integrated marketing unit. Publishers are now building microsites and custom ads for advertisers in order to get their spend. Are we that far away from NYTimes going to Ford and delivering 500,000 leads over a year for $25M? I don’t think so. Disintermediation anyone?

But this change doesn’t happen in display unless there is a fundamental shift in the mindset and technology. Like search, visitor and advertiser value can only be delivered and game-changing revenues can only be achieved for publishers if we start optimizing for people and performance, not pages and prices.

For example, we know from Search that content consumption and temporal trends provide amazing intelligence to deliver relevance. Most large publishers are privy to these interest trends but they do not have the data capture systems to quantify it or the targeting systems to leverage it or the advertising systems to monetize it.

Just like Search the forces that drive monetization are everything from personal needs to macroeconomic or geographic issues. By studying content consumption patterns publishers can understand even earlier than Search the opportunities to match the information and services needs of their audience. Intent is not generated in Search. Intent is generated in publishers’ content and then moved to Search by the user.

These huge changes require new platforms and tools. For publishers the revenue generation tools available to them have not kept pace with the investment and innovation on the ad side.  The irony is that while agencies are not staffed to leverage most of the more analytic and technical tools publishers sit on a goldmine of optimization mindshare in with their ad ops teams. If it’s ever going to happen, now is the time. Nothing less than the future of the Display market is at stake.

Jonathan’s work with distributed real-time systems goes back 20 years. Most recently Jonathan was the CSO of Offermatica (now Adobe Target) through its acquisition by Omniture and founded the services unit of the company that is now Adobe Digital. He is well recognized for his work pioneering real-time site-side and landing page optimization. He was the Founder and CEO of VitaminLab.com, a leading e-commerce site in the Health and Nutrition category, from 1998 to 2004. His career in real-time technology began working with building automation systems for high-rise commercial buildings including The World Trade and World Financial Centers.