My company, Gladly, has a unique perspective on the ad industry as both an ad network helping publishers monetize their audience, and as a publisher of our own small/medium website, Tab for a Cause, that sees roughly 40 million monthly banner ad impressions. In our experience, small publishers in particular will see the most benefits from the newest monetization trend, header bidding.

The online ad industry is built primarily around scale, at the exclusion of almost all other metrics. Big budget advertisers need to reach large audiences to put their money to work and as a result, ad networks seek out publisher inventory that can match that scale. As ad networks survive on thin margins, they find efficiency by prioritizing the largest publishers, and trying to automate or delegate smaller publisher relationships.

The end result is that as a smaller publisher, you will likely have more companies between your website and the original advertising budget sucking up margin. This means that smaller publishers generally earn much less per ad impression (even when serving the exact same ads) than large publishers. There is nothing inherently wrong or malicious about this bias, but the programmatic ad tech promise of creating seamless connections between millions of websites and advertising budgets hasn’t quite been realized.

Header bidding helps publishers more directly connect their ad inventory to the advertisers who are buying it. It makes a combination of smaller ad networks function more like one larger network and increases your exposure to advertisers. For small publishers, this results in instant and large revenue gains.

We launched a header bidding setup on Tab for a Cause at the beginning of June, and since the day it was live, we have more than doubled the average CPM of ads sold on our site. Prior to June, we had a consistent daisy chain setup of sending our ads to a premium ad exchange with a high floor price, and any of the unsold inventory was sent to a second exchange.

Eventually, we discovered that our premium ad exchange was taking a ~50% share of revenue. When we reached out to negotiate a better rev share, they essentially shrugged and said we were too small to bother with. This highlighted our dependence on a one-sided relationship, and led us to look into header bidding.

After some research, we settled on using Prebid.js because it supported the most partners and as an open source, self-hosted resource, it gave us more control over the setup. We reached out to about 12 header-bidding capable ad exchanges and were accepted into 7 of the smaller networks (“Top tier” networks seem to have about a 100 million monthly impressions threshold).

Engineering-wise, implementing Prebid was quick: it took about a day of engineering work, plus an extra day to write our own Prebid adapter for a header bidding partner that didn’t have one. Coordinating with our ad partners took a bit longer. Some partners were slow to provide the documentation we needed for header bidding, because they were still learning it themselves, and most wanted to review the implementation before going live. Depending on the partner, this back-and-forth took a day to a week to complete. 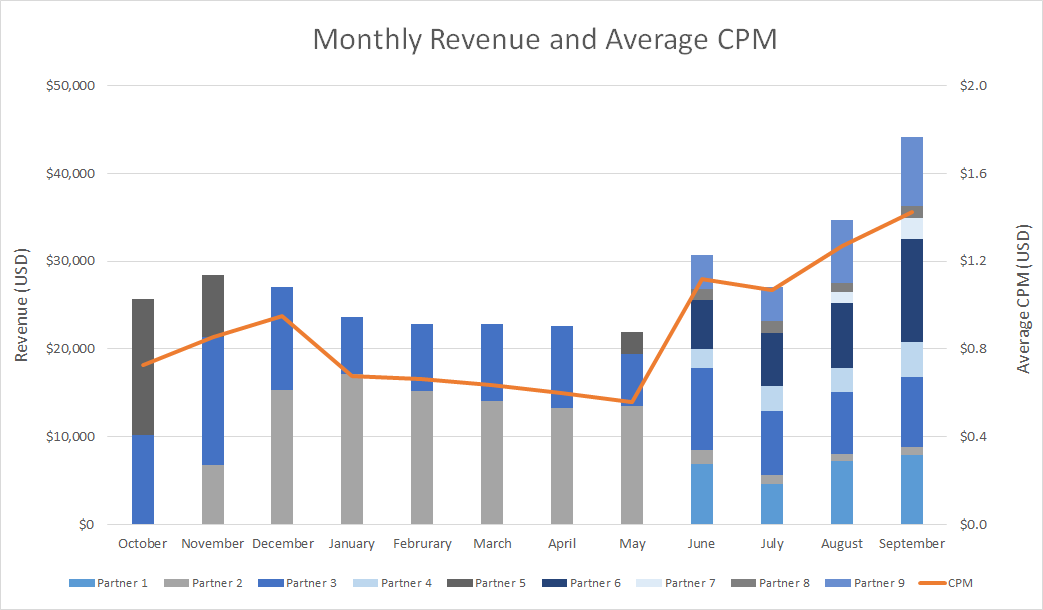 The first day we had our header bidding setup live, we earned about 40% more than the previous day. As we added more partners and optimized our setup, we increased those gains to nearly 100%. Furthermore, having a wrapper like Prebid.js has made it very easy to test/swap ad partners, allowing us to feel much less anxiety about those relationships.

If an ad network reaches out to us with a compelling offer, it is easy to turn them on, and let them prove it. Because the networks compete in real-time, if you add an ad exchange with less valuable inventory, it simply won’t win any bids. Previously, testing ad networks meant a painstaking process where oftentimes, we would lose significant revenue during the test.

Header bidding directly penalizes margin-hogging and less transparent ad networks. Our previous “premium” ad network that is taking a 50% margin—“Partner 2” in the graph above—immediately plummeted in number of won impressions. This is excellent news for small publishers, who no longer have to rely on contract or margin negotiations and can rely on pure competition between ad networks.

It is no secret that header bidding integrations can dramatically increase page load times. There are ways to combat this, but the best options—aggressive bid timeout limits or limiting the number of header bidding partners—is often a direct tradeoff between page speed load and revenue. As a result of increased latency, our total number of impressions delivered has decreased noticeably, but the increased CPMs more than makes up for the decrease.

For us, another difficulty with header bidding was getting accurate reporting and analytics. While Prebid does have a really great Google Analytics (GA) integration, we quickly exceeded the data limits for the free tier of GA, and thus had to come up with our own solution. We dealt with this by creating an Excel report where we pull completion data from our ad server (DFP SB) and estimate our daily revenue.

For our detailed records, we pull monthly reports from each of our eight partners and combine them (not a quick process). This is less a problem with header bidding itself, and more a symptom of working with eight very different ad exchanges (and, of course, our unwillingness to fork up tens of thousands of dollars for enterprise-tier analytics).

Before header bidding, the top tier ad networks either wouldn’t work with smaller publishers at all, or would take incredibly high margins. Meanwhile, the lower-quality ad networks would have less direct access to ad budgets, and usually subpar technology. Optimizing and working with multiple ad networks in a daisy chain takes a lot of time and knowledge.

Header bidding delivers on the programmatic promise of opening access, forcing competition, and reducing time investment. As header bidding allows multiple ad exchanges to have an opportunity to bid on “first look”, publisher inventory is opened to a wider selection of advertisers. Because the competition is done strictly as a bidding war, ad exchanges are incentivized to take lower margins and can no longer take advantage of smaller publishers with aggressive contracts and undisclosed margins.

Finally, once the initial header bidding setup is in place, small publishers spend much less time testing ad networks, fiddling with price floors, and reordering daisy chains. Most of the optimization happens naturally in the (now more transparent) competitive bidding.

Alex Groth is CEO and co-founder of Gladly, ad tech that’s changing how online advertising is done by focusing on the user experience. Through its services, Gladly works with publishers and advertisers to give users a choice in the ads they view, while protecting their privacy.